*This article is based on a product available in the Korean market. Specifics such as design, features, components, etc may differ by region.

Smartphone? Tablet? The Samsung GALAXY Note is taking the world by storm and we thought we should take one apart (to see what’s inside), so you don’t have to. 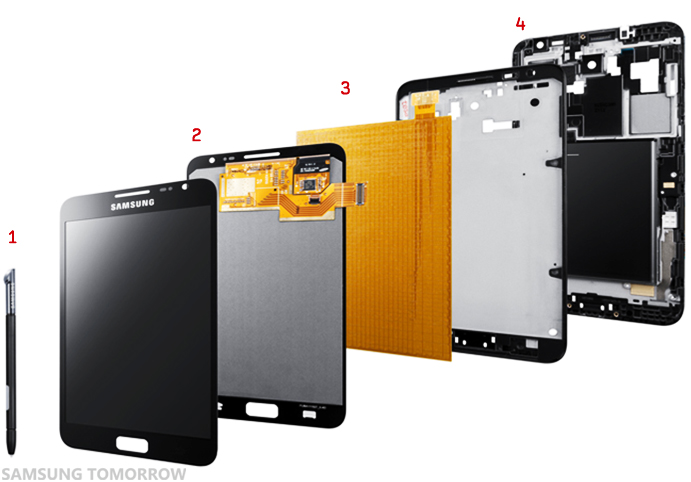 What would the GALAXY Note be without the S Pen? Still a pretty awesome phone, but that’s not the point.

The S-Pen uses electromagnetic induction technology and has pressure sensitivity equal to a regular pen.  Your input on the screen varies with the amount of pressure you put, making it a seamless re-creation of writing with an actual pen.

The digitizer interacts with the S-Pen to sense the pen-tip’s location and the amount of pressure.  By establishing an electromagnetic field, it blocks the noise and magnetism through the shield plate.

The bracket is like the Note’s backbone, holding together all the custom parts to maximize space efficiency. 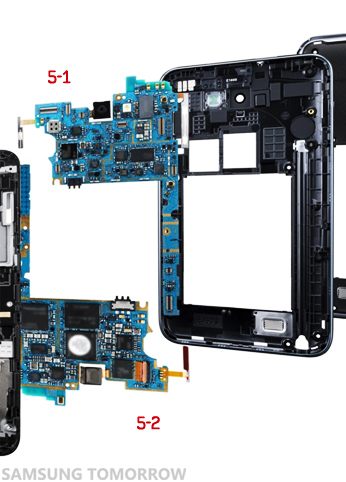 With over 1000 different parts included in the mainboard, it fully utilizes Samsung’s integration technology.

Detects the tilting motion of the Note, whether you’re turning it sideways for a widescreen view or turning it to play games.

Detects the up, down and sideways motion of the phone.

Detects when a detectable object comes close to the phone.  Prevents unwanted input during calls or other situations.

Detects the brightness, used to adjust the screen brightness accordingly.

Can used for close-distance communication, allowing users to use the phone like a credit card or transportation card.

Used to actualize the S Pen’s movement and use.

16/32GB of memory for storing lots of data including videos, music, etc.

The latest in communication technology, widely known as 4G. 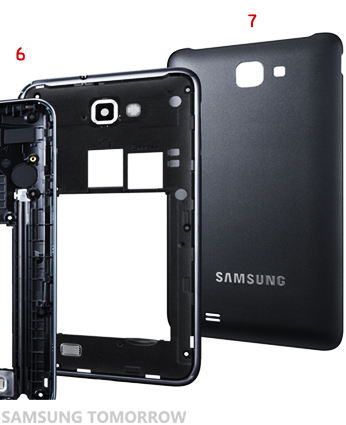 Twice the processing power with a dual core chip.

Back facing camera (with flash).

The area that stores a variety of antennae and wires.

So that’s it. Hope you’ve enjoyed it. If you want to see what’s inside a Samsung Smart TV or the Galaxy S II, check out the links below:

*All functionality, features, specifications and other product information provided in this contents including, but not limited to, the benefits, design, pricing, components, performance, availability, and capabilities of the product are subject to the country where you are located.