[Editorial] Back to the Future: A Decade of Chemical Innovation

Research and development is the heart and soul of Samsung Electronics. Huge amounts of time and resources are spent on developing and testing products.

Meticulously developing the best technological innovation, choosing high quality materials, and delivering the highest quality and safety standards is what makes Samsung Electronics proud of their products. Without proper attention to this product development stage, the current line-up would not be available on the market.

The first electronic products manufactured were large and contained huge amounts of plastics, metals, chemicals and other substances. The world had never seen such a growth in consumer products and electronic waste was (and still is) considered to be one of the fastest growing waste streams worldwide.

The long-term properties of many of these materials and substances were often not fully understood, and during the 1990s, researchers began to further investigate how these materials break down at the end of life and their potential hazards in consumer products. They soon realised that some of the materials used, such as lead, mercury, cadmium1 and brominated flame retardants2, needed far greater consideration for their hazards to the environment and possibly human health. Governments and industry had to take action, especially as the consumer goods industry was booming.

Europe took the lead with a massive step forward in chemical and waste legislation in order to better control these impacts. In 2002, the first European WEEE (Waste Electrical and Electronic Equipment) Directive was published to ensure adequate recycling of products at end of their shelf life. More importantly, 2006 was a landmark year for two pieces of legislation:

Both pieces of legislation aimed to drive industries to control the use of hazardous substances in their products through improved design and purchasing of materials. Now, over 700 substances are controlled worldwide.

These changes in regulation seem to have had great benefits to Samsung Electronics, using the  pressures of legislation as a perfect opportunity to go beyond and innovate new technology. This is what the company’s Vision 2020 centers around, creating products and designs that both enrich peoples’ lives and contribute to a socially responsible, sustainable future. 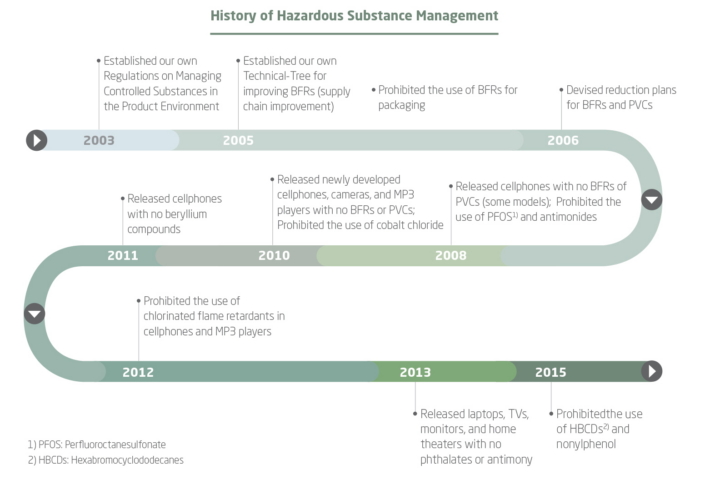 The example of a large CRT TV is often used as a way to describe chemical innovations in electronics. These TVs used to contain up to 2kg of lead added to the glass as both a safety measure and an optical enhancer. As scientists further researched the negative impacts of lead in consumer electronics and the EU began publishing restrictions, Samsung had a perfect innovation opportunity to revolutionise their customers’ viewing experience. The next generation market of LCD and plasma screens was developed, and Samsung became one of the leading manufacturers for display.

In 2009, the company was the first manufacturer to release a commercial line-up of mercury-free LEDs and in 2015, Samsung launched their cadmium-free quantum dot technology. Most manufacturers still have not been able to develop mass-market, commercial quantum dot TVs without cadmium. 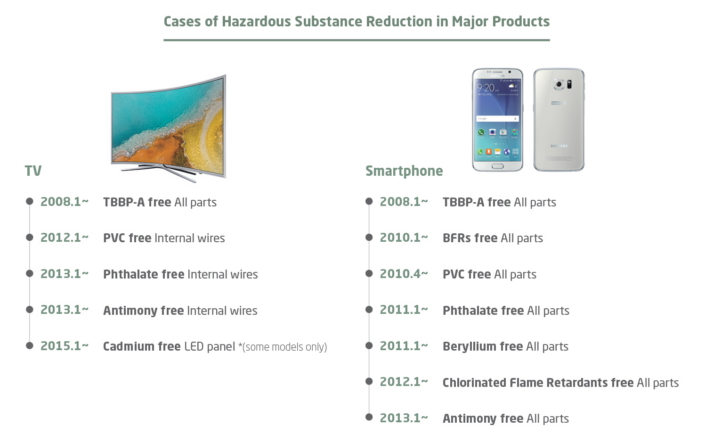 Over the years, many hazardous substances have been phased out of products, done as a result of in-house research and a commitment to the environment.  For example, it was only in 2008 when Samsung released cell phones that contained no brominated flame retardants or PVCs3, going above and beyond regulation.  After this achievement, new cell phones not containing phthalates4 or beryllium compounds5 were released. And it didn’t stop there. Later on, chlorinated flame retardants6 and antimony7 were removed, showing the fast pace of Samsung’s concern and response to hazardous substances.

These are just a few examples of what Samsung Electronics has been doing over the years to reduce the use of hazardous substances. The image below shows a brief history of the last decade:

Because of a growing understanding of chemical risks, it is important to continually investigate substances not governed by regulation.

Therefore in 2005, Samsung established the Environmental Analysis Lab for investigating hazardous substances and volatile organic compounds. This lab has acquired both KOLAS(Korea Laboratory Accreditation Scheme) certification and the official testing lab license of Germany’s BAM Institute(The Federal Institute for Materials Research and Testing). These achievements have assisted in maintaining the high standard of chemical analysis and in-house monitoring, and allows for enforcing voluntary activity.

It is important to comply with regulations concerning materials, which are ever-changing and becoming more stringent.  It is even more important to have open and creative minds which turn the challenges of substance restrictions into sustainable product innovation opportunities.

If interested in finding out more about Samsung Electronics’ environmental or social activities, read the latest Sustainability Report 2016 or send an email to environment@samsung.com.

3 one of the most commonly used synthetic plastic polymers, and a main contributor to landfills

6 substances used in polyurethane foam, rubber and plastics to make them less flammable

7 a metallic element with toxic alloys