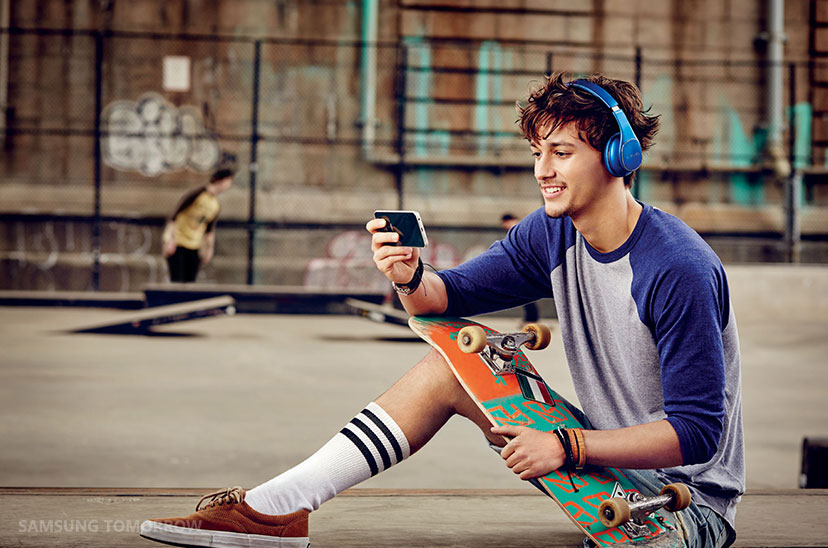 Mobile devices have massively impacted modern life, and the way we listen to music is no exception. Digital and streaming music services have gradually replaced CDs and other physical formats as the music lover’s preferred medium. And, though MP3 players were must-have items in the early 2000s, smartphones have now emerged as the main devices people use to listen to their favorite music, as well as stream videos and play games.

This shift goes beyond the added convenience offered by smartphones, but is also due to the need for higher quality audio. There is an increasing demand for Ultra High Quality Audio (UHQA) and the latest Samsung Galaxy devices are equipped to deliver optimization functions allowing users to enjoy immersive music.

These types of cultural changes are significant, because almost everyone listens to music. A study released by Nielsen’s Music in January revealed that 93 percent of the American population listens to music, and about 75 percent say they do so actively. According to another recent study, approximately 64 percent of smartphone users between the ages of 18 and 29 in the U.S. use their devices to listen to music or podcasts, and 75 percent use their phones to watch video content.

The advent of portable music devices was a significant milestone in music history because it meant listening to music was no longer confined to a particular place and time. Listening to music also became less of a communal activity and more of a personal one. This technological trend has moved towards a more personalized music experience.

Smartphones bring this freedom to a totally new level as music lovers can listen to music wherever and whenever they want and enjoy instant access to vast libraries of music – and videos – all at their fingertips. The ability to purchase, download and listen to an album with a few quick taps, queue your favorite music videos or live performances on YouTube and listen to streaming audio that learns what type of music you like through advanced algorithms means that there has never been a better time to be a music fan.

As a result, the pressure for smartphone manufacturers to up the ante on sound quality is high. In the same way users demand higher resolution displays that provide vivid, life-like color and picture quality, consumers want higher resolution audio on their mobile devices that provide more life-like audio. By offering an “Organic Sound” experience, users can close their eyes and more easily imagine that the singer they are listening to is actually performing there in the same room.

Samsung has been at the forefront of sound quality technology for some time. We saw early potential in cell phones as music players and launched the SPH-M100, also called the UpRoar, in 2000. It was the world’s first mobile phone with a built-in MP3 player, and it earned global praise for this innovative feature. MP3s soon became a standard feature on mobile phones, and the rest, as they say, is history. Samsung also introduced SoundAlive audio software but the push for higher quality audio really began with the debut of the Galaxy series of smart devices.

The audio experience is a key consideration from the earliest planning stages of every Galaxy device. The Galaxy Note 3, for example, was the first mobile phone to support UHQA (192kHz and 24bit stereo). At this quality, the playback the user will hear will be close to what the musician and sound engineer heard when the recording was produced. In the last year, this has become the new standard for smartphones, even though music in this format is only beginning to be widely available. To truly take advantage of this audio quality, a high-end pair of headphones, earphones or speakers are also required. And, to perfectly optimize this playback, Adapt Sound technology was implemented in the Galaxy S4. This allows users to optimize and customize audio to their own specific acoustic listening characteristics.

The Galaxy S6 is similarly equipped with extremely advanced technologies developed with music lovers in mind. In addition to SoundAlive and Adapt Sound, the Galaxy S6 also has the best quality codec-chip in the industry. Samsung has also included a high-quality, premium pair of bundle in-box earphones with each and every Galaxy S series edition. Most recently, Samsung added a bigger, more powerful micro speaker with an enhanced amplifier to the Galaxy S6 that provides even louder, clearer sound. However, to truly appreciate UHQA sound, audiophiles will want to choose Samsung’s Level On or Level Over headphones, which, along with the Galaxy S6, form a powerful duo in terms of audio performance.

But the best is yet to come. It is Samsung’s ongoing mission to relentlessly improve audio performance through design innovations that overcome the physical restrictions required to deliver the ultimate audio performance. Samsung will strive to emulate vacuum tube amplifier sound to bring an added feeling of warmth and familiarity that comes with analog music to next-generation Galaxy smartphones through finely tuned signal processing. Next generation Galaxy devices will make you believe you are truly at the live concert you’re listening to on your earphones, and will provide audio quality that sounds better than even before.

It is Samsung’s ultimate goal to provide high quality audio through smartphones that sound as natural and as true to the original source as possible; an organic sound that carries the emotional aspects of live music. Users will be pleased to find these upgraded sound capabilities with all of Samsung’s next generation Galaxy smartphones.

Senior Vice President of IT & Mobile Division at Samsung Electronics.