eMMC to UFS: How NAND Memory for Mobile Products Is Evolving 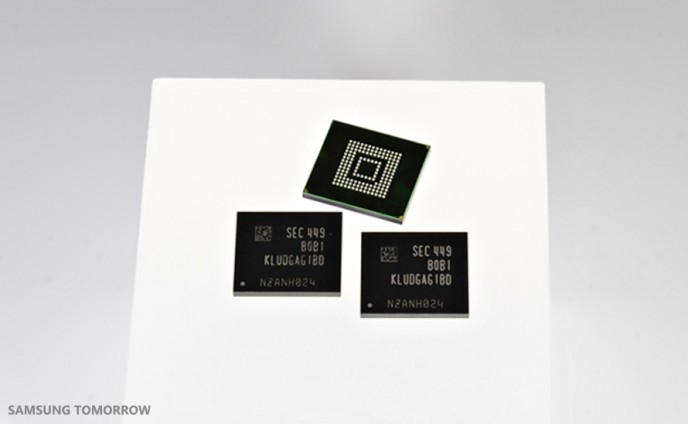 8GB? 16GB? 32GB? 64GB? 128GB?!! We just can’t seem to get enough. With better cameras and displays – which mean more selfies, bigger pictures and more videos – memory has been a growing priority when consumers shop for new mobile and tablet devices.

Naturally Samsung, the world leader in advanced memory technology, has been working vigorously to develop solutions to equip users with the ability to store as many images, videos and other media, as well as the capability to multitask on the device without jeopardizing the integrity of basic functionality is imperative.

Typically, smartphone and tablets have been using eMMCs (embedded multi-media cards) to store information. And today, we announced the mass production of the industry’s first 128GB embedded memory solution based on Universal Flash Storage (UFS) 2.0 standard.

First, what is eMMC?

eMMC, or embedded multimedia card, is an advanced, managed NAND flash memory for mobile applications and still is the dominant go-to memory solution for many consumer electronics, including tablets, smartphones, GPS systems, eReaders, and other mobile computing devices.

(“Managed” here means that it’s a solution consisting not only of NAND flash memory, but also controller/interface circuits to help sort out processes and improve performance.)

Samsung eMMC memory is extremely compact, typically smaller than a postage stamp, allowing for smaller and thinner devices. Leading manufacturers have favorited Samsung’s eMMC memory because it allows for a smooth pathway to elegant and advanced mobile designs with a short time to market. The latest standard, eMMC 5.1, even furthered the performance and power efficiency.

Then what is UFS?

UFS is the future of Flash memory. UFS 2.0, the most advanced JEDEC standard, offers sequential read/write speeds fast enough to rival SSDs while combining it with the low power consumption of eMMC.

With Samsung’s highly intelligent controller and firmware that provide the highest level of performance and quality, consumers will now have access to a better overall user experience. Along with faster booting, the next generation of flash storage offers a faster data input/output response, three times faster file copy, and three times the multitasking capability. To the average consumer, this means watching high-quality videos, playing high bandwidth games and other entertainment, along with running multiple applications, and downloading or uploading files, all without interruption in functionality.

UFS boasts a substantial improvement in performance. There are two main factors that contribute to this.

First, UFS has a LVDS(Low-Voltage Differential Signaling) serial interface which has separately dedicated read/write paths. This allows full duplex(two-way interaction) – in other words UFS can read and write simultaneously. eMMC, on the other hand, has a parallel interface which can only send data in one direction at a time – it can either read or write, not at the same time.

Second, UFS has a Command Queue(CQ), which sorts out the commands that needs to be carried out. Thus, multiple commands can be addressed at the same time and the order of tasks can be changed accordingly. eMMC, without CQ***, needs to wait for a process to be completed before moving on to the next one.

The Evolution of Flash Memory

Ever since its first introduction in 1984, flash memory has come a long way – from the humble thumb drive that so many of us still use, to SD and micro SD cards that have become a vital part of our digital imaging and mobile experiences, to the smart and sleek SSDs that are quickly replacing HDDs, to eMMCs that virtually define how much we can store in our pockets. Samsung has been shaping this industry, topping the NAND flash memory market since 2002 and producing many firsts thereafter.

20-plus years of constant leadership in semiconductor technology now enabled Samsung to be the first and currently only manufacturer to mass produce UFS solutions, and these UFS solutions are expected to bring about a dramatic change in the industry.

Samsung is constantly innovating NAND Flash technology, and is working to build industry-leading products that provide the highest level of performance and quality. What kind of solution would you want on your device? What would you like to see in the future? Share your thoughts in the comments below.

Introducing eMMC 5.1: The Next Step in Relentless Flash Innovation (Voices at Samsung Semiconductor)

3D V-NAND: Ushering in the Next Chapter of Flash Memory (Voices at Samsung Semiconductor)

* Speed refers to those of Samsung products based on respective standards

** Based on typically used micro SD cards. Actual performance may vary by speed class and maker.

*** Samsung’s eMMC5.1 also features CQ(Command Queue), which contributes to the improvement from eMMC5.0