Engineers or Designers? Get to Know the Technical Designers Behind Gear S2

Over recent years, a new type of talent known as the “generalist” has emerged. Generalists refer those who create new value by combining many fields and types of knowledge. At Samsung Electronics, one of the most interesting and important types of generalist to emerge has been the technical designer position. Technical designers have the mindset of designers, but the ability to program, allowing them to bridge these two very different fields. To learn about this new approach to UX design, the Samsung Newsroom recently met a few of the technical designers behind the revolutionary Samsung Gear S2.

Until recently, engineers and designers normally communicated with each other only through the designers’ static sketches or documents. Engineers would then have to turn those sketches into final products. But the ambiguities and difficulties in this process sometimes caused delays and misunderstandings. To improve this process, the role of technical designers has emerged as an important one.

Bonghee Han, Principal Designer, explained, “Technical designers are creative designers who have engineering competency and contribute to creating the highest quality UX designs. The importance of technical designers stood out during the designing of the Gear S2, working as a bridge between the graphic designers and the engineers, helping the communication between them. The technical designers considered how to combine design with user interaction to ensure the end result was as functional as it was visually appealing.”

“We did not get together intending to do some certain task. In the beginning, some people were designing movements and the user experience, and through Flash they brought their ideas to life.” said Jungwoo Choi, Senior Designer.

However, in developing the Gear S2, which has a new circular shape, naturally the design for new interactions became more important and the designers’ role grew.

“Designing new interactions on a circular device for the Gear S2, many different attempts were made in nearly all aspects of the device. Before the prototypes were made, programs were developed to review the design outcomes, so that gave us more time to think” Choi added.

Their ideation meetings were very passionate. If someone suggested an idea, someone else would immediately be working on the coding. The designers created hundreds and thousands of prototypes and tested them thoroughly to create the best experience for users.

Jongwoo Shin, Senior Designer explained, “After countless attempts, the most optimal point for rotating the display between screens and content was found. This process was applied to everything, including applications, screens and touch responses.”

“Because I believe the most perfect UX is a UX that feels so natural people don’t think about it, I worked on everything in a lot of detail. All these efforts became the basis for the Gear S2, and I am very proud of it.” Shin added. 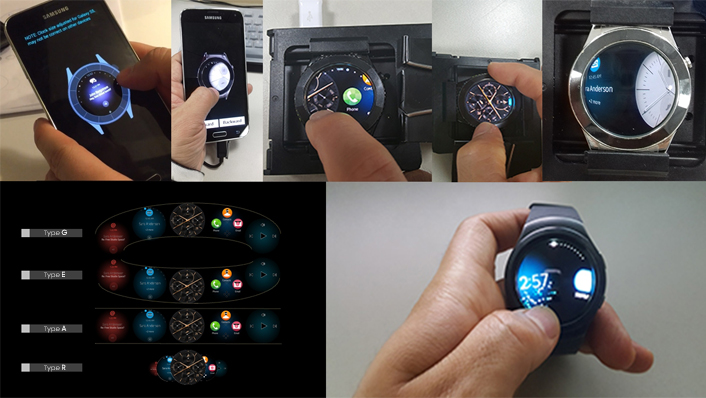 Working Towards a Shared Goal

When getting to know Samsung’s technical designers, it is remarkable to discover their range of academic backgrounds.

“I studied crafts at university. I wanted to see the outcome of my thoughts and sketches. So I wanted to study to learn how to realize my sketches, so my drawings didn’t just stay as drawings, but were brought to life. This is why I double-majored, to build my knowledge of software development. As I was studying, I learned that I could realize my imagination through source codes, and that’s what attracted me to technical design,” said Minwook Na, Senior Designer.

Jungwoo Choi studied mathematics but was very interested in coding and visuals. Jongwoo Shin studied engineering but was interested in graphics and motion. All of the technical designers have very different degrees and background knowledge, but they are currently working together as a team.

Synergy of Designers and Engineers

“When I was working on the Gear S2, I imagined what it would be like using it and what my friends and family would think using it, and that was enjoyable. In the future, I should be careful not to limit myself to stereotypical ideas. Caging yourself in could hinder your creativity. It is necessary to always stay curious about new things,” said Minkyu Park, Senior Designer.

User experience is a term that was generally unfamiliar 15 to 20 years ago, however, even back then providing convenience to users was actively discussed. And so, too, was technical design. These are the people who have been designing movements and creating new user experiences. Technical designers are crossing the boundaries between designers and developers, creating new synergies. We look forward to the role they will play in the future.