Everything you need to know about the WQHD Super AMOLED Display

WQHD: Don’t be satisfied with what you’re used to

The WQHD is known to be 187% clearer than the FHD. How different is the WQHD from the FHD when in use? Let’s check out the demo of FHD and WQHD displays below: 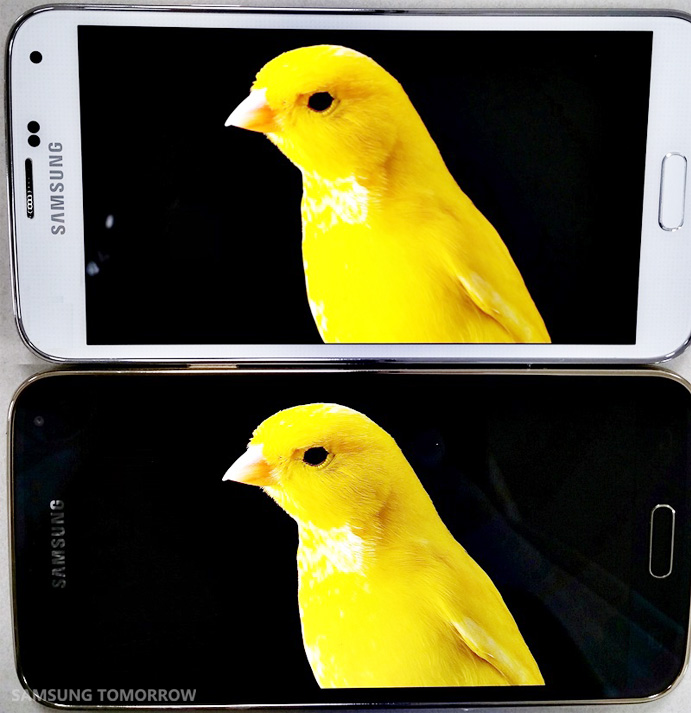 As you can see, the detail of the bird’s hair is more elaborate, and the colors are softer and natural in the WQHD. Likewise, the WQHD can represent even the hair, the eyebrows, and the skin wrinkles in far more detail.

It’s sometimes hard to think about display quality since we already have such clear and vibrant displays on the market. But the matter of fact is that these displays are simply what we have gotten used to, and there is certainly room for improvement. With the WQHD you don’t have to be satisfied with what you’re accustomed to. The WQHD can show you more – improved readability, more vivid three-dimensional effects, and the aesthetic beauty – which will bring viewers closer to “the real thing”.

*Note: Total pixels and the PPI

The WQHD has 1,612,800 more pixels in total than the FHD. But comparisons can be a bit tricky unless mentioning the display size or the ppi (pixels per inch). PPI explains the display resolution by the number of pixels in one inch (25.4mm), so you must check out the ppi when you compare two displays of different sizes. Just for your information, PPI can be calculated from knowing the resolution in pixels (width and height) and the size of the screen in inches:

And since each pixel consists of RGB (red-green-blue) components of a color, the higher the ppi is, the more detailed color the display can represent, which becomes closer to the reality.

So far, the WQHD is the best resolution for the smartphone. Tablets and the TVs have different resolutions respectively optimized for different use. One important note is that every display has been evolving to a higher resolution, which will continue until it reaches the boundary of delicacy that human eyes can tell.

The Display Driver IC (DDI) is one of the core elements of the display that allows texts and images to be shown on the screen. Samsung developed a new RAM located inside the DDI and it enabled the display to consume power only when the user activates the screen or application by pressing a button or swiping the screen. As long as the user doesn’t activate the phone, the battery power is not consumed even if the screen or a certain application is turned on.

In cooperation with UX Team, a new color composition ratio which helps minimize the battery consumption was designed and applied to the major UX such as the home key. This delicately re-adjusted color combination led the WQHD to lower the power consumption without affecting the vibrant color representation of the Super AMOLED.

To realize the WQHD resolution that is higher than that of TVs (most TVs have FHD resolution these days) in a single smartphone was challenging in many aspects. Developers in Samsung had to review all the existing development process and decided to start from the beginning. For the creation of the WQHD smartphone, the planning and manufacturing process as well as the equipments was newly developed.

As we discussed, the WQHD offers the highest resolution for the smartphone at present. In addition, Samsung was able to maintain relatively lower power consumption with new elements, mainly by making the most out of the advantages of the AMOLED display. As a matter of fact, the combination of the WQHD resolution and Super AMOLED display generates a synergy effect.

Samsung Electronics has been using Super AMOLED display that delivers rich and accurate colors with higher contrast ratio. The color representation coverage of the Super AMOLED is wider than comparative TFT LCD and it creates aesthetic beauty and enhanced three-dimensional effects. This merit of Super AMOLED display is maximized as the resolution gets higher. When having higher PPI, Super AMOLED’s visual quality is maximized and the gap between it and LCD deepens. Given the fact that the resolution of the display will become higher and higher, that’s why Super AMOLED is clearly expected to take center stage.

What will be the next step?

How will the smartphone display evolve further in the future? As mentioned above, the evolution will possibly end when it arrives the confines of human eyes’ capacity that distinguishes the detail of the images. After that, the display will be developed into flexible display or transparent display which will enable us to use the smart devices in a wider range of environments in more various way. For now, it seems that we first have to wait for the WQHD to be standard on smartphone displays. With superior display panel combined with unique software technology, Samsung is ready for next steps so that the display is easy on your eyes and smarter than ever.