Complete user satisfaction lies much deeper than what one can see on a specification sheet. The numbers might look impressive but it’s only when you get to experience it first-hand that you fully appreciate it. That’s why Samsung reinvented what was already a hugely popular camera in its previous iteration. The Galaxy S7 camera is an improvement because its dual pixel technology makes it perform to a high level even in low light.

The Galaxy S7 is the first phone to ever use dual pixel technology and the results make it a worthwhile change for Samsung. It’s now easier for users to capture the exact moment they want, making sure they have lasting memories that are preserved in high quality. These are real enhancements – not just ones that sound good on paper.

We caught up with our experts to find out what happened behind the scenes to enable the Galaxy S7 to have the best camera Samsung has ever created. Youngmin Nam, senior manager of the Global Product Planning, principal engineer Hwayoung Kang and senior engineers Youngsoo Bok and Beomjoon Kwon from the Camera R&D joined this interview. 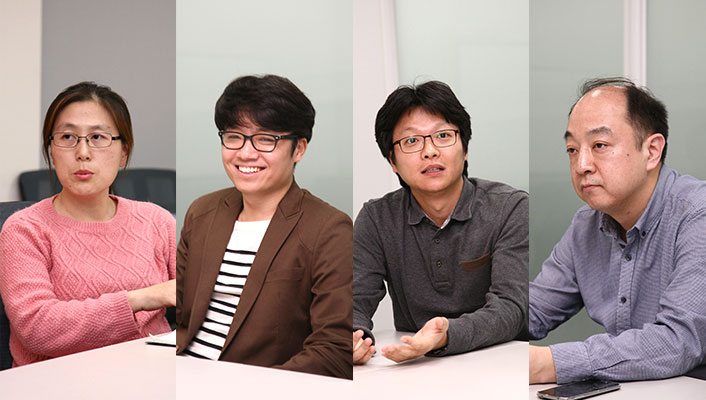 Q. Why did you apply dual pixel technology? What are the limitations of the typical smartphone cameras existing today?

Youngmin Nam: What prompted us to develop the dual pixel technology was the consumer need. Some people say a camera is a device that handles light. But if you think about it, it would be more appropriate to say that a camera is a device that handles light and time. A camera should be good at controlling light to allow people to take a clear picture, and time to allow them to grasp the moment they want to. In this regard, Samsung has so far made its best efforts. For instance, we improved autofocus by applying a phase difference sensor for the first time in a smartphone.

Consumers, however, still wanted more. Some said that when they took a picture in a dark place, it wasn’t bright enough. The picture tended to be dark and unclear so people couldn’t photograph the moment in the way they wanted to.

Hwayoung Kang: We researched all the possible areas related to a camera where progress could be made, not only the sensors but also tools and software, before we chose to go with dual pixel. We reviewed almost all the latest technologies related to a smartphone and a camera and came to a conclusion that a way to show the most innovative effects was to build in a dual pixel sensor, which was entirely new hardware back then.

Q. What process did you go through before you applied a dual pixel sensor? What was the most difficult process that still sticks in your mind?

Kang: Since there was no example of dual pixel technology built into a smartphone, there was a big risk to using a new sensor. However, because a camera was one of the most important features in the Galaxy S7 and S7 edge, and dual pixel technology was a defining technology that determined the performance of this camera, we had a sense of responsibility to implement it in a proper way.

Youngsoo Bok: The image quality of a camera is hugely affected by the sensor and lens. In the case of the Galaxy S7 and S7 edge, as we built in a dual pixel sensor and a brighter new F1.7 lens, we faced new problems that didn’t exist before. For instance, we needed a new part that could collect and process information sent by a dual pixel sensor where there were two photodiodes in a pixel.

When it comes to image quality, in particular, even when a user sets the device to ‘Auto’ mode, settings are different in a smartphone camera depending on the condition under which a person uses a camera. Even under such varied settings and conditions, a camera should be able to provide the best image quality. As a new sensor and lens were built in, all the relevant processes had to be prepared from the ground up, right from the beginning. 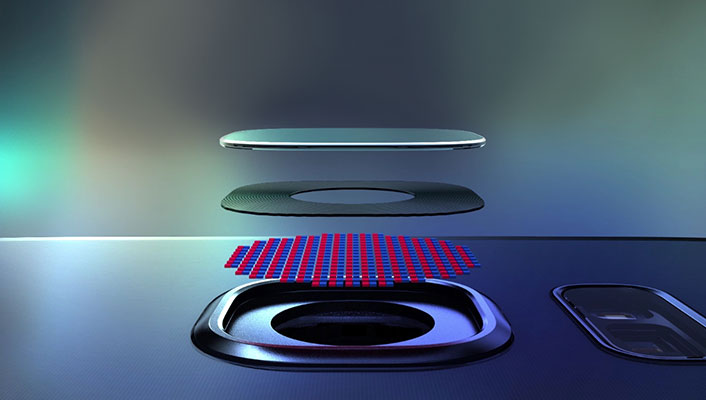 Q. What efforts did you make to prove dual pixel technology internally?

Kang: This product was so special. Until the very last minute, we thought really hard about whether this solution was the most optimal one. Before this, I spent years researching a single sensor and thinking of how to develop it within its boundaries, but this time a dual pixel sensor was about introducing a wholly new technology. We were very careful to examine whether using a new sensor technology was the most advanced yet practical solution in terms of enhancing image quality and satisfying consumer needs.

Bok: From the beginning of this project, we thought of how to show the two strongest points of dual pixel technology: really fast autofocus, and bright and clear images in low-light conditions. So, we created a demonstration kit that could show image quality performance in comparison with the latest strategic products.

Nam: In terms of new technology and image quality, dual pixel technology provides a completely different level of product quality. But we were very worried about whether consumers could accept this technology. However, since engineers clearly demonstrated upgraded performance in low-light conditions, which consumers were eager to see, we carried on with conviction.

Q. What changes did the replacement of hardware bring about during the development?

Bok: In order to demonstrate the actual speed of autofocus, we can measure the time it takes and show it in quantitative terms. But for consumers, we thought it would be more understandable. We approach them with sensibility through actual comparison, not with specs. There was a need to show how fast our new product was compared to existing products.

That applies to not only autofocus but also picture quality in low-light conditions and even no-light conditions with 0 lux. The whole camera development team even carried DSLR cameras and a Galaxy S7 prototype, and searched for conditions where a user might actually use a camera. 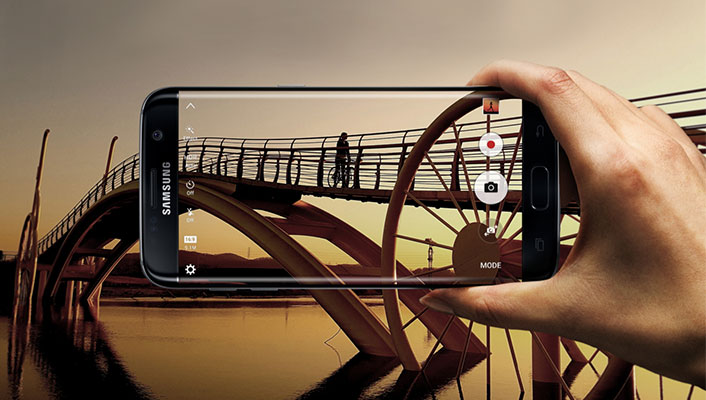 Q. What difficulty did you have when you applied camera technology to mobile?

Kang: Even though dual pixel sensor was already built in cameras, building it in mobile was another challenge. This is because there was a huge difference in the size of the sensor itself. In previous years, however, Samsung had secured technology to keep a sensor at almost the same size while providing a higher number of pixels, and also had partners who could work together to build it. And we had expertise to handle smaller pixels. We were confident that we could make it if we were able to reduce the size of the existing pixels a bit more, building on the existing technological process and combining them together.

Q. How will building in dual pixel technology change the development of a smartphone camera?

Kang: We’re planning to focus on further improving the sophistication of dual pixel technology, and when this technology reaches near perfection, it could raise the possibility of building in the superb features of cameras, which have been thought of as impossible to be built in a smartphone. In other words, this could be seen as having established infrastructure in which a smartphone camera can further evolve.

Nam: Building in this dual pixel technology is an example of practical innovation. We tried to introduce what people really needed rather than showing off new features. We found a solution to satisfy these practical needs, and ultimately created a camera with which a user can conveniently use dual pixel technology and take a picture of whatever scene they want to at any moment. 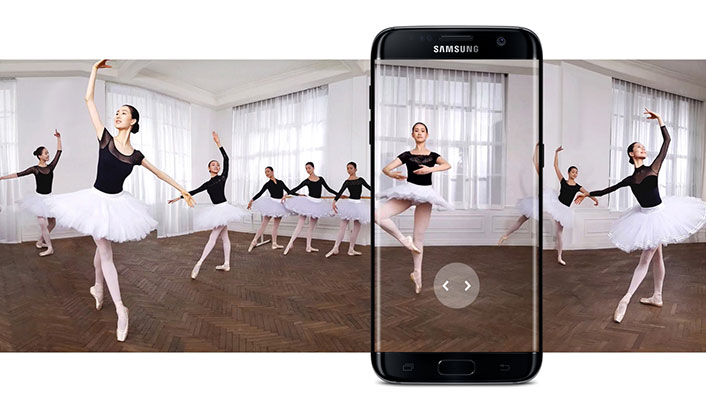 Q. What made you include Motion Panorama? Any tip for users when taking a photo?

Nam: We enabled the Galaxy S7 and S7 edge to instantly take the best quality pictures with a dual pixel sensor and bright lens based on Samsung’s best expertise. After putting much thought into how to provide consumers with this new experience, we suggested a new way that broke down the barriers between photos and video. In fact, we wanted to provide a new experience in which a user could vividly remember the moment when they took a picture. Motion Panorama and Motion Photo are such examples.

We wanted to breathe life into the current Panorama mode and make it more vivid, so that people can enjoy a great view in a richer, more dynamic way.

Motion Photo and Motion Panorama provide a new experience of enjoying pictures, not just the moment when you take them. Using these two modes, while looking at a motion picture, you can touch the scene you want to see, tilt the screen, and have fun searching the video.

Q. What was difficult when you implemented Motion Panorama? How does its recording work?

Kwon: The most difficult part when developing the software was to make sure the new features did not overlap with existing ones, because the settings featured in a number of cameras were all very different. So we thought deeply of how to ensure a user could effectively feel a certain feature differently from others.

For Motion Photo, when you turn it on, a camera starts recording all the scenes even if you don’t press the shutter. And the device shows you only three seconds before you push the shutter. In such a case, a user might be concerned about power consumption or data processing arising from it. In order to address those concerns, we always considered how to make sure our device worked more efficiently. Furthermore, there was a long discussion between various departments to decide how many seconds before our device should show a motion picture.

Q. What made you include Hyperlapse? Any tip for users when taking a photo?

Nam: People often use a time-lapse feature when they need to take a lengthy video and watch it in a short period of time. Hyperlapse is a feature that evolves and fits this time-lapse feature into mobile usability. Hyperlapse doesn’t simply fix and compress time, but it analyzes video and records it in a way that lapses faster when there is less movement while recording it in a way that lapses more slowly when there is more movement. It makes the footage more understandable when people watch it. On top of that, it minimizes the camera from shaking when taking a picture.

Let’s imagine you visit a museum or a famous tourist attraction. You cannot videotape everything and it is difficult to videotape while you appreciate them with your eyes. In this case, however, all you have to do is just turn on Hyperlapse and carry the Galaxy S7 and S7 edge along with you. With Hyperlapse, you could even watch the footage of an entire amusement park in only one minute. Of course, we also provide the existing fixed time-lapse feature.