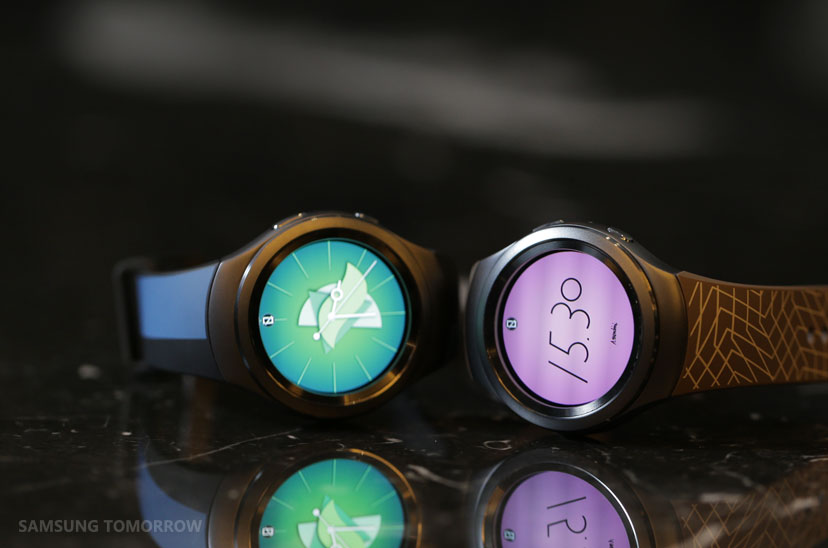 In October 2013, Samsung introduced the Galaxy Gear, laying the groundwork for the wearables market, the popularity of which has since taken off worldwide. With an estimated 169 million wearable devices expected to be produced in 2020, Samsung has since expanded its wearables portfolio to embrace the latest in consumer demand and product innovation.

Its brand new Gear S2 reflects the company’s commitment to progressive innovation as the leader of this speedily developing sector, merging simple and intuitive usability, stylish and compact design and better integrated features into a single device.

The Power of the Circle

Perhaps the most stand-out feature of the Gear S2 is its eye-catching design. The Gear S2 is available in two versions, and its design harnesses the power of everything the shape represents: perfection and timelessness.

The premium, elegant look of the Gear S2 Classic and the unique, modern style of the Gear S2 are both refined in design and display. Natural materials such as metal, leather and glass add to their look, while the devices’ compact sizes enable them to naturally fit the wrist like an analogue wristwatch.

The Gear S2’s intuitive interface is just as impressive as its stunning aesthetics, and is navigated via a rotating bezel and side button that allow the user to access a series of pre-set applications and functions quickly and conveniently. Its navigation features are easy-to-use, comfortable and allow for an unobstructed interface, setting it apart from similar devices on the market. 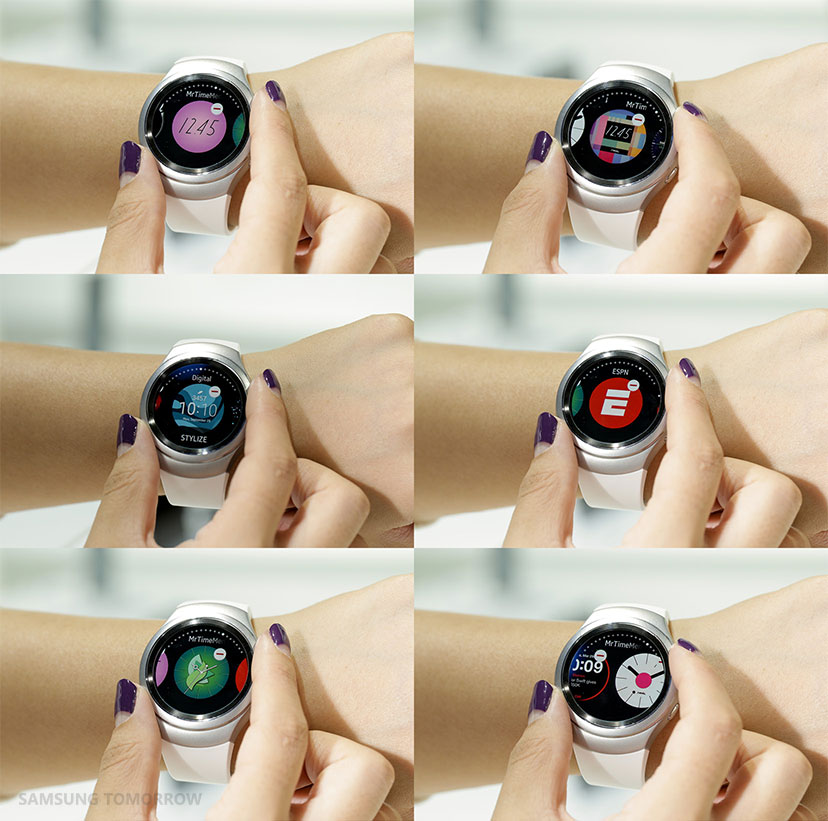 In addition to its versatile circular display and interface, the Gear S2 is optimized for seamless, everyday use with enhanced wearables technology.

Its always-on communication features let users stay connected like never before via notifications that allow them to check email and review their calendar, along with functions to send texts via pre-set messages, voice input, emoticons and a keypad. Along with 3G connectivity and an e-SIM card—a first for a wearable device—all of this is possible straight from the user’s wrist.

Thanks to the device’s quick and convenient communication features, consumers will have more time to focus on more important things, such as health and fitness. The Gear S2 has been designed with this in mind, and includes a number of sensors and improved tracking functions to monitor activity progress throughout the day, which is illustrated on a circular timeline. And, in a time when it’s more difficult than ever to stick to a fitness plan, the Gear S2 acts as a personal trainer (minus the hefty monthly fees) by sending messages of motivation when users have been inactive for a period of time, and praise when it recognizes that users have been exercising.

With the Gear S2’s embedded NFC (Near Field Communication) technology, wallets can be left at home, as users can process payments with a tap on an NFC reader. Furthermore, Samsung is working with a number of partners across a variety of industries to expand the usability of wearables, from smart car keys to hotel room keys and remote controls.

These innovative, connected features are powered by a battery that can last two to three days, keeping users constantly connected without having to worry about the next charge. 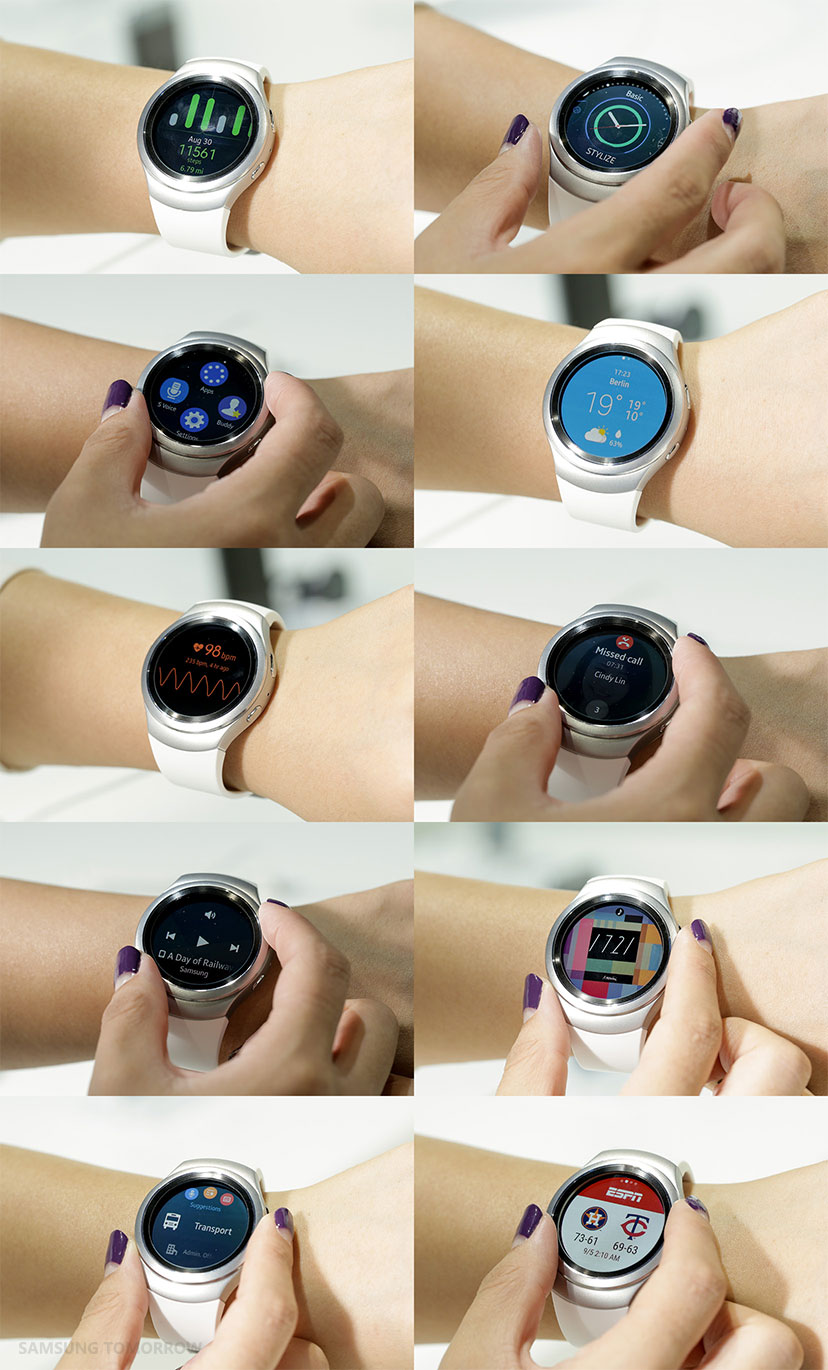 Although smaller than a smartphone, the Gear S2 still offers the same great access to users’ favorite apps, and through open collaboration with developers and partners, many of them have been optimized for the device’s circular interface. This makes it easy for a user to check the score of the big game, the morning weather forecast, locate a nearby restaurant or see what’s going on in their social circles.

Similarly, a slew of customization features, such as the Design It Yourself watch face, enable users to truly personalize their device to express their own moods and unique styles.

The Gear S2, Samsung’s most progressive innovation in wearables to date, illustrates the power of the circle through its intuitive, customizable user interface and enhanced features that allow for greater personalization.