It’s often said that a picture is worth 1,000 words.  Never has this been truer than since the dawn of the digital age, when people around the world have started to use photos as a communication tool.  Not only have smartphones and Social Networking Services caused an uptick in photo sharing, but since the popularization of the digital camera, people simply take more pictures than ever before.  And once we take them, we share them with friends and family, rather than just save in an album. When Samsung Electronics realized this changing demand in the camera market, they planned and produced the NX Series (NX20, NX210, NX1000) of smart cameras to offer new value and experience to the consumers.

However, as with any plan, realizing the vision doesn’t mean quickly throwing together the project. Samsung had confidence in its superior optical technology, digital technology, and technology for the core components, as well as its number one position in the global wireless communication technology. Using the concept of horizontal integration, Samsung was able to connect TVs, PCs, smart phones, tablets, etc with SMART CAMERAs and Cloud service. 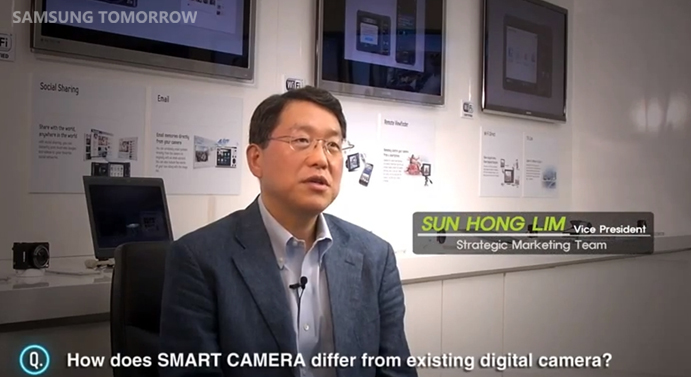 When designers draw a sketch, they usually think about both the NX design as well as the type of user who is going to use the camera.

First of all, designers visualize their ideas by sketching, rendering, and specifically styling their designs. They are thinking of how the product will be used, and the interior components, even in the very initial stages of design through this process, they produce mockups to touch and test. By making the mockup many times, they create the most optimized design in terms of motion and texture.

After all of that work, when the design is determined, the role of the designer is not over yet. When it comes to the color, texture and manufacturing, they have to see to it that the design is can be applied in the mass production process.

Analysis of the new line 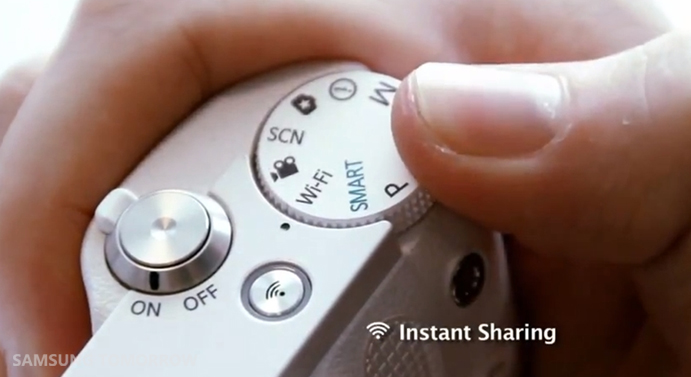 The NX1000 is for those who want to take high-quality pictures easily. This model is small and lightweight, and comes in bright colors, like white and pink.  Its sleek design allows you to carry it anywhere and capture all of life’s little surprises.  When you’ve got them, you can quickly share with friends and family, all with the touch of a button.  It features the SMART Link button on the top to maximize its ease of use. 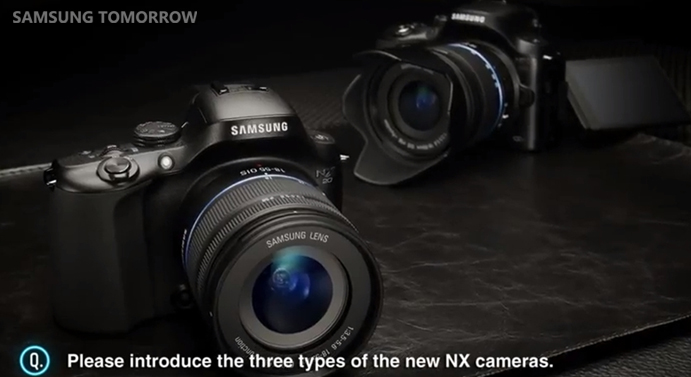 The NX20 is a DSLR type compact camera for professionals, and it has superior performance and convenience. It has the fastest shutter speed of the three cameras and it’s possible for continuous shooting of 8 frames per second to help you capture crucial moments. 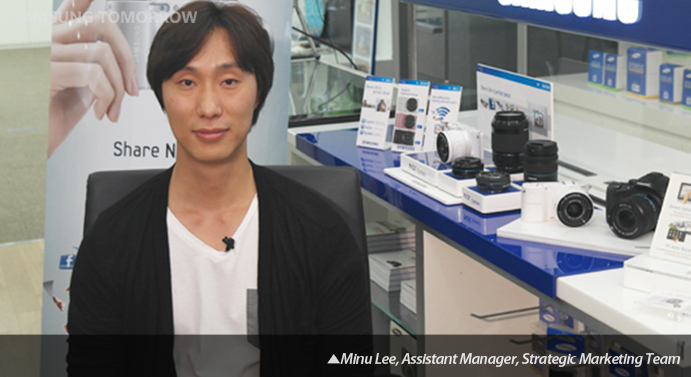 The NX210 is similar to the SMART Camera NX200. You can share 20MP pictures with the NX210 as soon as you click the shutter. 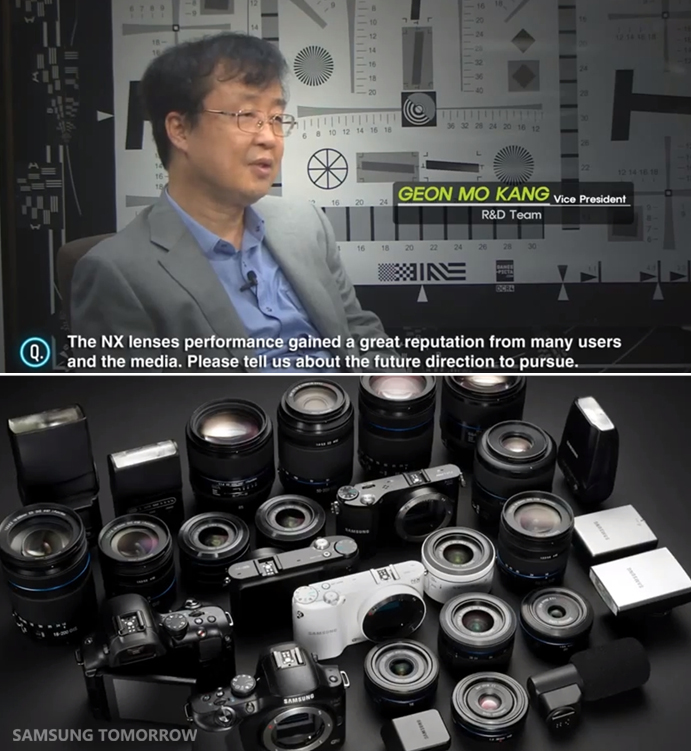 The primary goal of any camera is to capturing pictures and videos of the best possible quality, which means that all cameras are only as good as their lenses. For this reason, Samsung NX Smart Cameras and Samsung Electronics will continue to pursue class-leading optical performance lens and NOT just a good lens with a valuable price. 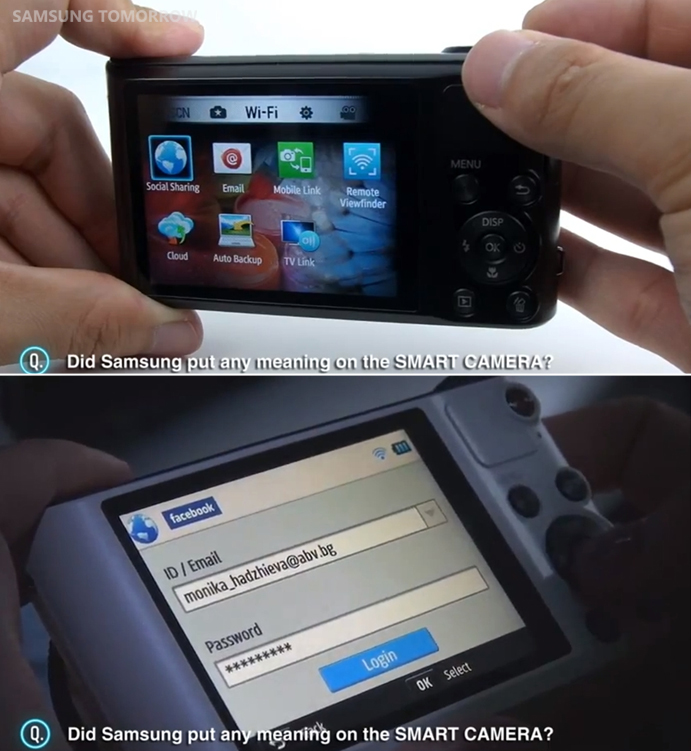 The basic concept of the smart camera is instantly shareable high quality photos.  This is possible through WiFi connectivity.  Because the NX series connects to WiFi, your pictures can be shared and saved directly to Facebook or email.  Not only that, but photos can be sent to smartphones too! One of the headaches of most digital cameras is the potential loss of photos if your computer crashes or you lose your memory card.  The NX Smart Camera makes this worry-free thanks to the cloud service which allows you to upload pictures instantly. 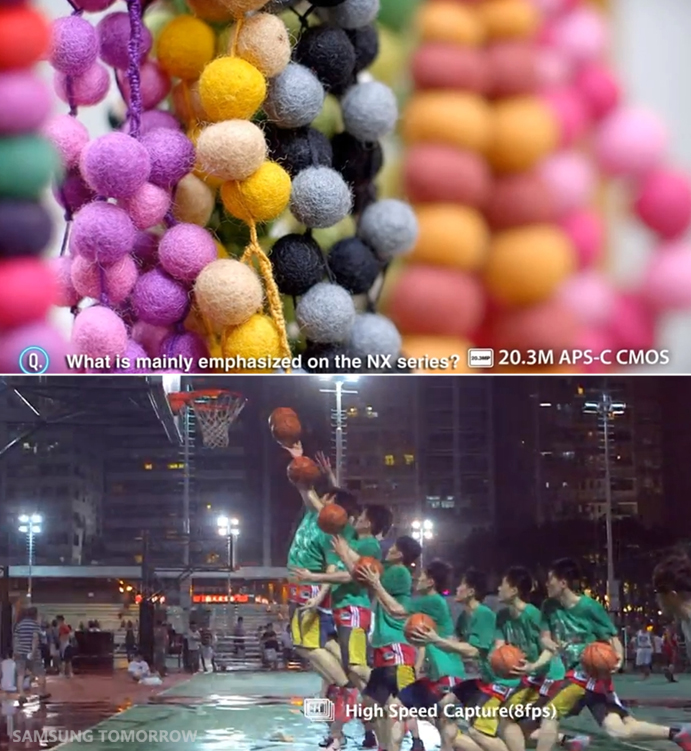 There are lots of smartphone cameras that take a decent picture.  But when the planners of the NX line sat down, they wanted to make the Smart Camera as professional as possible.  This was done by focusing on fast speed and DSNR type design. Planners shortened the lag on shutter release time while raising the shutter speed, for some of the fastest shots possible.

Want more behind-the-scenes info?  Check out the interview video below.

Reasons You Didn’t Know You Needed a Camera with Wi-Fi: the NX series

How They Defined the Designs of Samsung NX Cameras

Imaging Innovation – How NX Lenses Came to Be