*This article is based on a product available in the Korean market. Specifics such as design, features, components, etc may differ by region. 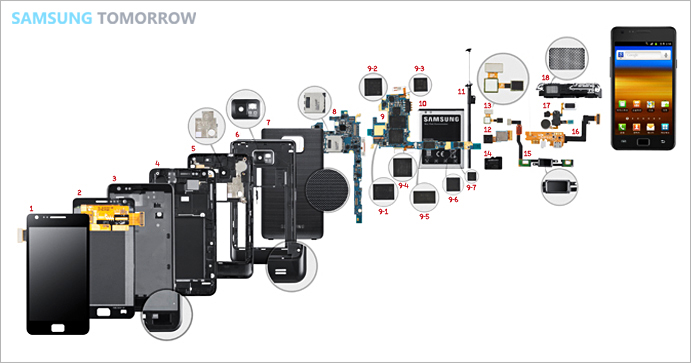 Selling over 3 million units worldwide in just 55 days and eagerly awaited in markets not yet available in, the Samsung GALAXY S II is one hot smartphone. With the power of a dual-core processor, a sharp 4.3” Super AMOLED Plus display and all the Android goodies jam packed in a miraculously slim 8.9mm, it’s no surprise that customers are so interested.
Ever since its debut, there’s been a lot of buzz about how slim the GALAXY S II is, and as always, we’ve had techies try to strip the device down. Now we don’t want you to risk ruining your beautiful device, so we dissected it for you. Enjoy. 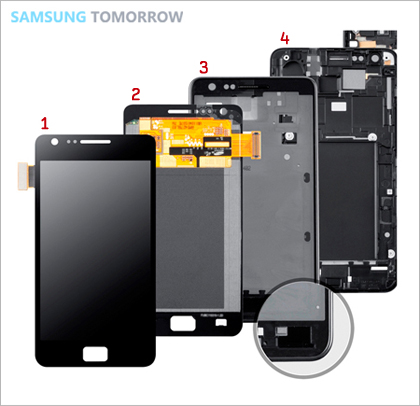 The new 4.3-inch Super AMOLED Plus on the Galaxy S II is 14% larger than that of the Galaxy S, and is the largest out of all Super AMOLED displays. With 50% enhanced sub-pixels, it provides improved pixel configuration that allows clearer readability of icons, texts, photos, and other applications. Also, battery efficiency has been improved thanks to the use of organic materials.

The touch panel is an all-in-one form of the Super AMOLED.  In other words, it’s a thinner, clearer, more responsive display. The sensitivity of the touch panel itself has also been improved so that it can react to the slightest brush of a finger.

The narrow bezel design was applied to further highlight the Galaxy S II 4.3-inch widescreen. To protect the screen from scratches, the surrounding perimeter of the shell was thickened by 0.1mm.

This area has been optimized for the maximum efficient spacing for the parts. 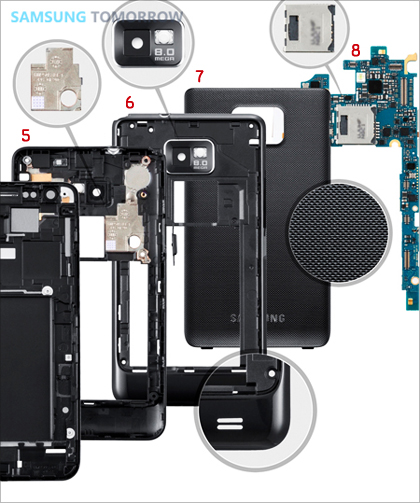 5. Rear Cell (Front)
The front side of the Rear Cell acts as a shield to prevent radiofrequency signals from reaching your body.

The protrusion of the camera in the back was minimized to make the phone thinner. The bottom part of the phone was designed with a slight bump in order to minimize stress on the hand and to improve the grip when the phone is held.

The cover uses a new 0.1mm ‘Hyperskin’ material that has miniscule patterns of 3,000 connected chains. This pattern is very practical as it also prevents scratches, finger prints, and slips.

The previous Galaxy S had separate slots for its SIM and memory cards. However, for efficient use of space, these two were brought together for the Galaxy S II, bringing the memory slot under the SIM slot. 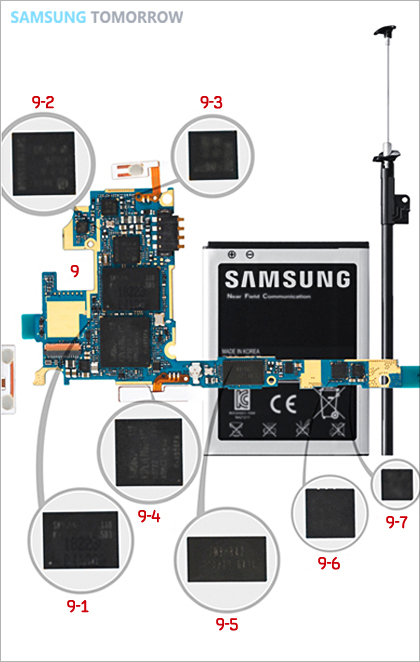 9. Main Circuit Board (Main Board)

The main board of Galaxy S II is the PCB which holds most of the key componentsThis main board contains more than 700 parts that incorporate the cutting edge technology of Samsung.

We all know that two heads are better than one. The Galaxy S II sports a dual-core chip which allows faster computing power compared to the traditional single-core AP. Dual-core processors come in really handy when handling multiple applications, full HD video recording/playback, and 3D game playing. The 3D performance has also improved 5 fold thanks to the Quad-Core GPU which raises the performance to 3200M pix/s.

This modem chip is 3 times faster than its former 3G network, and provides 21 Mbps download speed. This is fast.

NFC technology allows data transfer between devices that are at a distance of 10cm or less. This is a short-range technology for file-sharing, mobile payments, transportation passes, and other services.

The Galaxy S II is equipped with 16 GB of internal memory. You can carry about 200 CDs worth of music (assuming 4MB audio files, 20 songs per CD). You can also add external memory space by putting a micro-SD card in the memory slot we talked about at 8. SIM/Micro SD)

The Galaxy SII is equipped with BT 3.0 + HS providing high-speed data sharing at a speed of 24.4 Mbps. This is 8 times faster than other Bluetooth 2.1. Also, the Wi-Fi Direct is a next generation technology that allows file sharing between handsets without a wireless access point. Data transfer speeds here go up to 300Mbps.
9-6 Gyro-Sensor

The gyro-sensor is state-of-the-art technology that senses directional motions. The motion UI technology is enabled by this piece of technology.

The accelerometer is a sensor that picks up the tilting motion of the phone. The accelerometer will turn the screen 90 degrees upright when the user tilts the phone sideways while viewing pictures, browsing the internet, watching TV, and other similar functions. 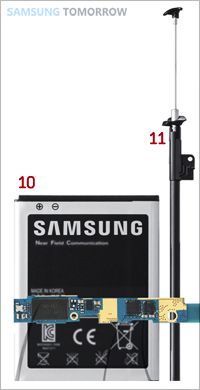 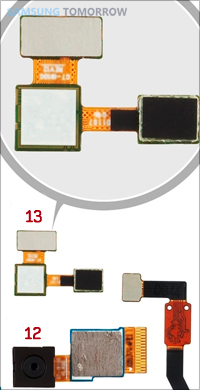 For Korean customers, there’s a DMB antenna so you can watch TV on the go.

Of the two cameras geared on the Galaxy S II, the 8 megapixel one on the back is able to take both high quality pictures and 1080p full HD videos. The camera also includes an auto-adjustment system to take brighter pictures in the dark as well as a supporting flash with 100 lux output.

The Galaxy S II also provides a 2-mega pixel front-facing camera, proximity sensor, and light sensor. The proximity sensor turns the screen off when the user puts the phone near his or her face to talk. The light sensor increases battery efficiency by adjusting the brightness of the screen according to the surrounding environment.

14. External Memory (MicroSD) Card
This is what you use if you need extra memory. Sold separately. 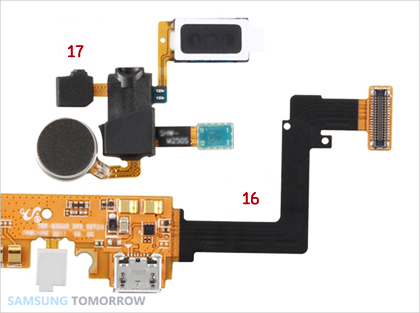 The Galaxy S II has been equipped with two microphones that enhance the quality of voice calls as well as recognize sound during voice calls. The module also incorporates a USB connector.

17. Vibration Motor
The Galaxy S II uses a motor that enables the vibration function. A 3.5mm earphone jack and a receiver are also put here with the motor. 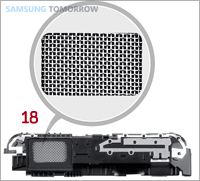 18. Antenna & Speaker
The Galaxy S II has been equipped with an antenna that can pick up most broadcastings around different regions of the world.

So that’s it. You’ve just seen the director’s cut version of a GALAXY S II teardown.

*All functionality, features, specifications and other product information provided in this contents including, but not limited to, the benefits, design, pricing, components, performance, availability, and capabilities of the product are subject to the country where you are located.