If you’re like most people, one of the first things you test when checking out a new smartphone is the camera. The camera can be the deciding factor on the purchase of a new phone, so image quality is of the utmost importance. Over the past few years, Samsung has been on a mission to improve the quality of the camera in its smartphones.

By listening to consumers’ comments and concerns, Samsung realized that users wanted to capture moments in ‘real-time.’ Hence, to meet the users’ needs, Samsung created a completely new image sensor for the Galaxy S5, which offers high resolutions that enable fine details and textures to be captured and provides heightened responsiveness for rapid-fire still photography and FHD and HD. With this image sensor inside the Galaxy S5, real-time HDR, Fast Auto Focus, and Selective Focus features were developed around this sensor. Today, we are going to take a look at the camera of the Galaxy S5.

One of the Engineers of the Galaxy S5 stated that he and his team especially focused on developing the HDR (high dynamic range ) when creating the Galaxy S5. To make the real-time HDR, they controlled both short and long exposure time through another sensor, making the delay time close to 0 seconds. The delay time refers to the time spent in producing the image right after taking a shot.

Also, they created a new algorithm that allows the sensor to handle the large area of pixels in real-time. Hence, they took pictures day and night, from sunrise to sunset in various weather conditions, even in the freezing cold of winter.

In fact, they took at least a thousand pictures a day, travelling around popular places around the world trying to increase the high definition range in real-time as well.

As a result, over the course of several months, the team developed a single-shot method that captures all details and uses different exposure levels for different parts of an image, resulting in higher color fidelity even in poor lighting conditions. This lets users know what the image will look like in HDR mode under any circumstances with just a single tap of HDR ON/OFF. What’s more, users can take photos in bust shots and videos even when there is a strong counter light or when the subject is shaded.

To help users nail that action shot, Samsung tried to shorten the focus time needed to the absolute minimum. The engineers at Samsung believed that a camera that detects two phases at once would shorten the focus time. Hence, Samsung built a brand new sensor with PDAF (phase detection auto focus) functionality and a special chipset for the sensor. The phase-detection auto-focus feature was included as it enables the creation of a focused image much more quickly and accurately when the perfect focus is achieved, and even when it is not.

Thanks to the sensor and the chipset, the focus time was reduced to 0.3 seconds, which is 0.7 seconds less than the previously available options. So yes, the Galaxy S5 is able to deliver a remarkably fast autofocus speed, allowing users to capture motion without a blurred foreground or background. In addition, users can focus on what’s important by blurring the background and emphasizing the main subject in defined detail with the new Selective Focus feature. 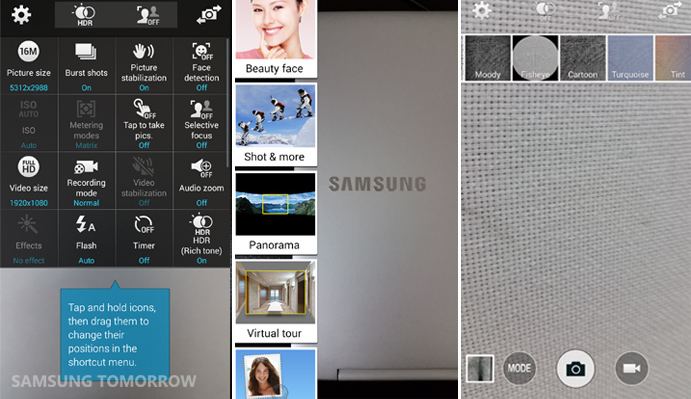 Finally, Samsung also made the user interface much simpler, so consumers can take shots more quickly. Users can now take pictures without unlocking the screen by switching the camera shortcut on through the settings. Through customer surveys and tests conducted inside the company, a simple user interface was one of the favorite features of the Galaxy S5. Engineers at Samsung said they felt extremely proud when they heard that people liked the easy user interface, as the challenge that he and his team faced with changing the user interface was a success.

With all these improvements, users can now take shots much more quickly thanks to the Galaxy S5. Samsung hopes to create a camera that takes photo in the color, tone, brightness, vintage, resolution, ISO, and image quality the way the user wants, without having to adjust the settings. Also, Samsung expects that camera will continue to become more human-like, producing the same picture quality as seen from our eyes. Maybe in a few years time, or even sooner, we can expect a Samsung smartphone with a camera that can take shots even quicker than the Galaxy S5.