Galaxy S5 has finally hit the market. There’s a lot to talk about with the new Samsung Galaxy S5, but the first thing people seem to notice is the ‘display.’ Actually, the display of the Galaxy S5 has been generating buzz since it was showcased at Unpacked 2014. Although the awesomeness of the Super AMOLED display of Galaxy S5 is clearly visible and speaks for itself, many of us want to know more. With some help from the engineer of Galaxy S5’s display, we investigated how and why the display is different from previous Galaxy S models.

Since the beginning of the Smartphone era, we’ve had to deal with the inevitable glare on our smartphone. Whether it’s the glare under the bright sunlight or an overwhelmingly bright display in the dark environment, many of us have put up with these problems, justifying it as a technological limitation. With the new Galaxy S5’s display, there is no need for such justifications. Check out the GIF below.

As you can imagine from the demonstration GIF above, even when the smartphone is outside under the blazing sun, the local contrast enhancement of the display increases the level of illumination and contrast level for a clear view of the content. Basically, it automatically analyzes and segments the display under changing light conditions. Moreover, our engineer says that because it has 1.6 higher Ambient Color Gamut than LCD, (Brightness Condition: Outside: 50,000 lux, Display:  500 cd/m2), you can view movies or texts even under the sun without having to worry about the glare or shielding the phone with your hand.

The new algorithm for the display of Galaxy S5 supports super Dimming, which allows fine adjustment of luminance in dark environments. Now users can use the Galaxy S5 comfortably without having to strain their eyes from excessive brightness.

Moreover, the Adapt Display of the Galaxy S5 lets you adjust to whatever environment you are in. The Adapt Display analyzes incoming lights & content and automatically optimizes the color range, saturation, and sharpness of your display. This means that it provides a customized display for video, camera, web browsing and e-books. Moreover, the display adjusts to the surrounding lighting like a chameleon. Conventionally, when you are under blue-tinted lighting, your smartphone tends to look different (yellow-ish) because your eyes adjust according to the surrounding lights, but the smartphone couldn’t.  However, the display of Galaxy S5 adjusts the illumination level accordingly to make the display look more natural to users. 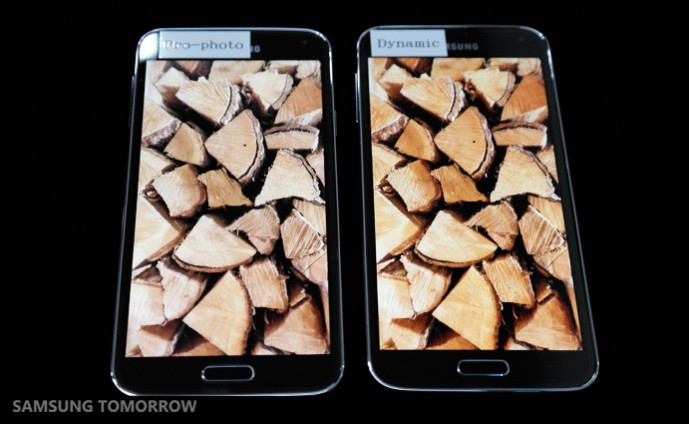 If you think about it, vividness is something that we naturally expect from a display. Therefore, color accuracy is arguably the most important thing when it comes to display. Two elements that determine how vivid a display can be are color gamut (the range of colors) and contrast ratio (the range of brightness. Basically, the wider and higher the color range and contrast ratio are, the more vivid a display it can produce. Compared to conventional TFT LCD display:

According to the engineer, not only can the wide color gamut of the Super AMOLED project a more natural color, but it also meets the international Adobe RGB standard. Generally, companies tend to meet the sRGB color standard, which was established back in 1996. However, sRGB has its limitations in terms of color representation. The Adobe RGB standard set in 1998, which is considered the ‘professional standard’, tends to makes up for this limitation. Galaxy S5’s display meets both standards.

For example, Galaxy S5’s display supports modes such as Standard, Dynamic, Cinema and Professional photo mode. While the Professional photo mode satisfies the Adobe RGB standard, the Cinema mode meets the sRGB standard within the color error level of 0.005. This is considered especially difficult, because every color combination possible with 3 colors of RGB and 24 colors of mixed colors need to be accurate within the standard.

Long story short, the display of the Galaxy S5 can reproduce richer and brighter images compared to TFT LCD with a higher color gamut and contrast ratio.

One other thing people may have noticed is the response time of the Galaxy S5. The response time of the display influences user experience of the product pretty significantly. Just imagine how you felt when you missed a great photo opportunity because your camera wasn’t focusing fast enough or when you couldn’t watch a video because it was constantly lagging.

The response time of the Galaxy S5 is 0.01ms, which is the fastest in the current market. The fastest response time is maintained even in any temperature conditions (-10 to 40 Celsius). Therefore, say goodbye to lagging movies and sluggish cameras.

In the end, you don’t have to know these details to see the superiority of the Super AMOLED display of the Galaxy S5, especially if you decide to use them on a daily basis. As many people already saw at Unpacked 2014, what the display of the Galaxy S5 offers is clearly visible. However, if you ever wonder just how good it is, now you have something to refer to. So when you do, we hope this article comes in handy.