In any sport, athletes and amateurs alike are concerned about how their equipment might impact their performance. For gamers, the capabilities of their hardware are fundamental to their experiences. It can be particularly frustrating when the viewing field of the game is interrupted by the bezels of three monitors, or by the slow response of the display to the commands of the gamer’s controllers. With more and more game enthusiasts turning to bigger, wider screens, a small question arises: play on Samsung’s 65” QLED TV Q8C or Samsung’s 49” CHG90 QLED Gaming Monitor?

Response speed – how fast the screen responds to commands or changes in the game – can help to make or break a gamer’s stats. When the difference between top scorer and average player rests on reactions, especially in racing, first-person shooter (FPS), flight simulation and action-heavy games, every millisecond can have an impact. Three main factors can influence response speed: MPRT, refresh rate and input lag.

∙MPRT: This stands for motion picture response time, thus indicating the real response time which is recognizable to the naked eye. The faster the screen’s response time, the lower its image retention, which helps to reduce eye strain and prevent “ghosting”, where the faint image of a moving object’s previous position is displayed. The QLED TV Q8C has a response time of between 2 and 8 milliseconds depending on the setting*, while the CHG90 QLED Gaming Monitor clocks in at 1 millisecond. 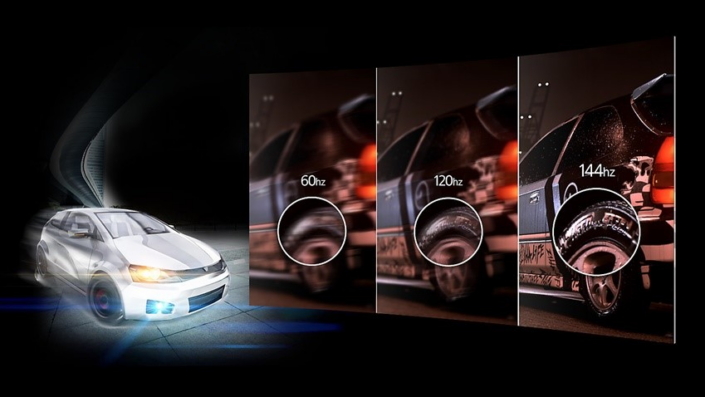 ∙Input Lag: A display’s input lag plays a vital role in increasing response speed, as it determines the time the monitor or TV takes to react to commands made by game controls – whether it’s a keyboard or a console’s controllers. As input lag decreases, and the screen responds more quickly to commands, player reactions can be even faster. At 20 milliseconds when set to “Game Mode”, the input lag of Samsung’s QLED TV Q8C is the lowest amongst TVs on the market, and Samsung’s CHG90 QLED Gaming Monitor fully supports Radeon FreeSync 2™ technology, which aims to reduce input lag to a minimum.

Screen burn-in has certainly become a hot topic recently as more consumers are encountering the problem of image retention, especially in their OLED displays. Since it is often attributed to parts of the screen being static for an extended period, gaming in particular runs the risk of screen burn-in after prolonged play.

However, even while gaming Samsung QLED screens (both TVs and monitors) are free from burn-in because they utilize the new metal Quantum Dot technology. Quantum Dots consist of semiconductor nanocrystals, which can produce pure monochromatic light. Since they are material particles embedded in minerals, including rocks and sand, the inorganic material does not contain carbon compounds, and thus is not as susceptible to change as organic molecules. As such, Samsung’s QLED TVs worldwide come with a 10-year burn-in warrantee** when purchased. 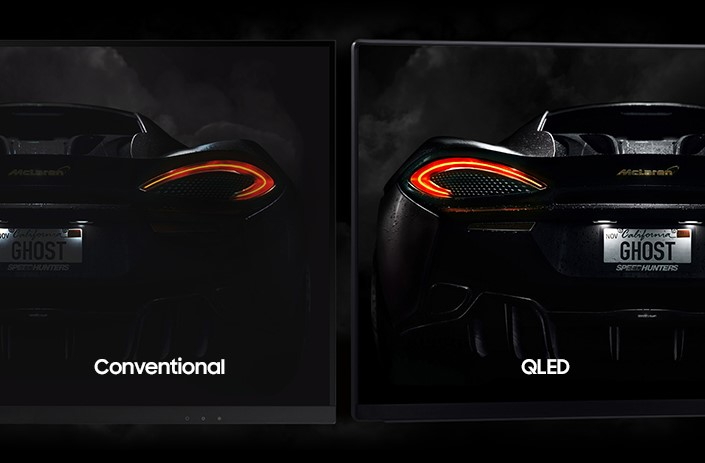 High Dynamic Range (HDR) is quite literally a game-changer for players. The technology offers greater contrast, allowing dark areas to appear darker and light areas to appear brighter. Black is monochrome no more as HDR technology provides stunning depth and range to the color, offering hues and shades never before articulated on the screen. Developers are now producing HDR games and, in many situations, being able to see shadows and silhouettes clearly, even against dark background, will give a player a significant edge over their competitors. Both Samsung’s QLED TV Q8C and CHG90 QLED Gaming Monitor support HDR technology. 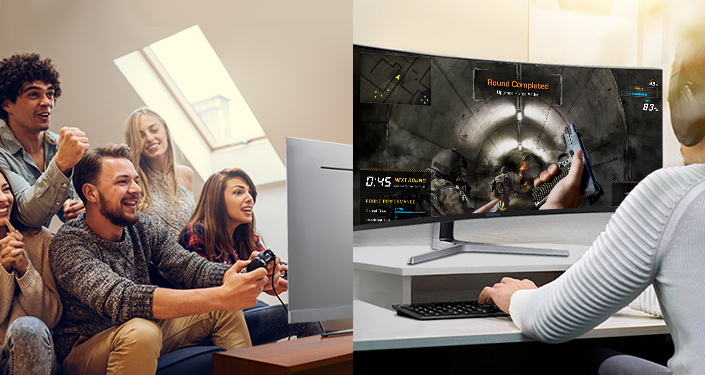 At 49 inches, 32:9 super ultra-wide curved, the CHG90 QLED Gaming Monitor is pushing boundaries as the widest gaming monitor available. It gives gamers the opportunity to enjoy a completely bezel-free, fluid and fast-paced field of view, especially while exploring single-player endeavors. Gamers can play games such as The Witcher 3: Wild Hunt, Assassin’s Creed Origins, Rise of the Tomb Raider, Dota 2, League of Legends (LOL) exactly as their developers intended, further taking advantage of the immersive gaming experience that the monitor provides.

On the other hand, the 65” QLED TV Q8C is perfect for users who want to bring their games into the heart of the home and play against family and friends side-by-side, discovering together immersive pictures and 100% color volume. A gathering will be able to enjoy many games together, such as sports-themed games and car racing games. What’s more, PC gaming on a large TV is hassle-free, as Samsung’s QLED TV Q8C can stream from an in-home PC directly, using the Steam Link app available from the Samsung Smart Hub.

Gamers can rest easy knowing that QLED monitors and TVs are optimized for gaming, offering large screen game-play that gamers can enjoy either on their own or with friends. Thanks to the stunning picture quality and burn-in resistance provided by QLED displays, both the QLED TV and the QLED Gaming Monitor definitely make a strong addition to any gamer’s suite of hardware.

*MPRT of 2ms can be achieved when LED Clear Motion mode is on. MPRT is 8ms in Default mode.

**Details of the burn-in guarantee for QLED TVs vary by country, and the policy will gradually be introduced in other countries as the QLED TV is launched in each market.