What if, sitting on the couch, you can dive into the ocean and explore the underwater world or check out Tony Stark’s lab from the Avengers? With the passing of time, a lot of what we used to consider science fiction has become reality. Samsung has been working to make another one of these imaginations, namely Virtual Reality, a reality. Samsung Gear VR, unveiled first at IFA 2014, offers an unreal real 360 degree VR experience that allows you a total immersion in the virtual environment. Cool. So how did Samsung do that? How was the developing process of the Gear VR?

The idea of a ‘mobile-based VR’

Since the VR devices require high-end technologies including high precision sensors, and high-resolution display, and strong computing power to process all that, so far most of VR products were PC-based. Therefore, whereas traditional HMDs (Head Mounted Displays) are connected to PCs over wires, it is a groundbreaking innovation itself that the Gear VR is wireless and that it is mobile-based. Well, how did the idea of ‘mobile VR’ come from?

While Samsung has been carrying out researches on virtual reality products, various attempts to make and improve HMD were made. A decade ago in January 2005, Samsung obtained a patent on a HMD that uses a clamshell feature phone. This was the on of the first times the idea of using a mobile phone as a display in the HMD surfaced. Keeping up related research, Samsung judged that creating a mobile-based environment could be more favorable for the popularization of the VR devices. 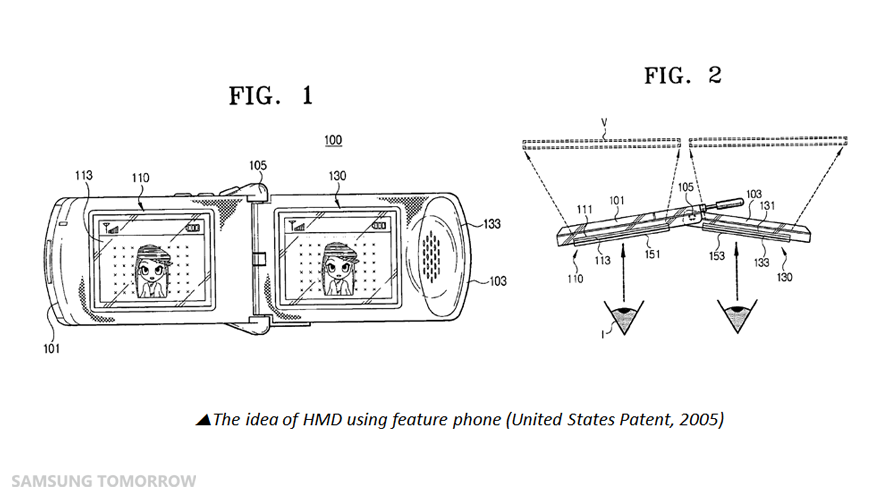 However, it was difficult to realize the idea using feature phone into reality with the performance and display of the current phone. Samsung continued research on VR and HMD internally. And when the Galaxy S4 was launched in 2013, an official team was formed and it started planning to create a VR device based on a smartphone. Accordingly, diverse HMD prototypes with the Galaxy S4 were made.

Still, the performance and the display (despite the Galaxy S4 display being Full HD) were not sufficient yet. On the bright side, Samsung learned several other critical elements in the VR headset technology: speed and accuracy in tracking the head, a display with super-fast reaction , and GPU optimization.

Finally with the Galaxy Note 4, the Gear VR became commercially available. The high-end AP(Application Processor), GPU, and especially the QHD display made it the perfect suitor for VR display. Over thirty prototypes with different variations were made, while constantly reflecting the feedback from partners from in and out of the company.


There were challenges… a lot.

The idea of mobile-based VR headset actually started to be realized with the Galaxy Note 4. Also, cooperation with Oculus was another major part in the creation of the Gear VR.

“In the beginning when we and Oculus worked together, there were huge differences between the two on the concept of the device,” said Joo NamKung (Product planning, Samsung Electronics). Oculus has been concentrating on gaming and Samsung wanted to make it cover diverse entertainment content including movies, videos, and photos. Besides Oculus, as a VR expert on PC-based HMD, didn’t have as much experience dealing with smartphones. And hence started the discussions to make it happen. 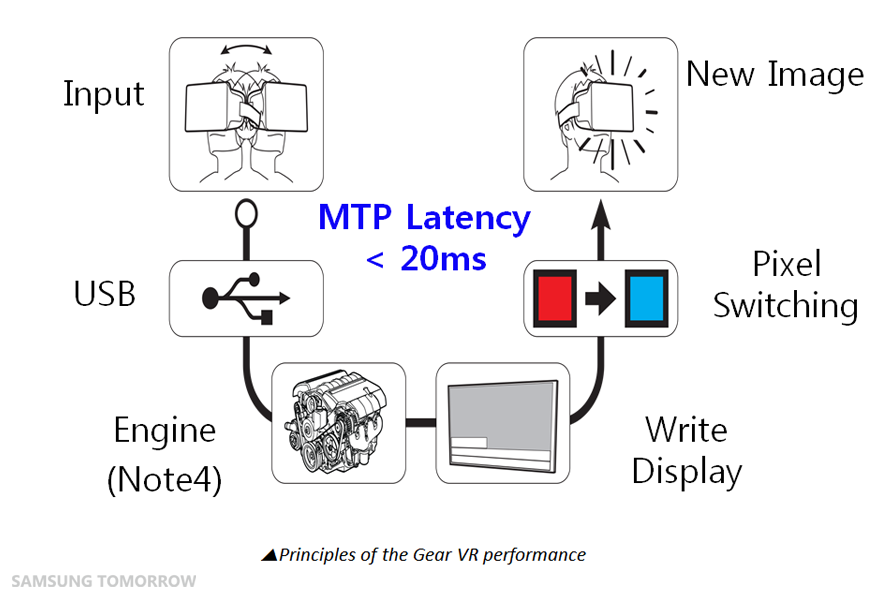 In order to implement performance of the Gear VR, extensive efforts were made in terms of hardware and software. YongSeob Yoon (Senior Engineer, Samsung Electronics), who worked on developing the hardware, said that a huge study on human body data of different ethnicities and ages were used to make the device be comfortably wearable. Data included the likes of average distance between eyes, size and location of the nose, prominence of cheekbones, head size, etc. As for the software, much collaborative efforts were made to establish the performance with the advanced VR technology and the high-end display of the Galaxy Note 4 from the component level up. A few of the major goals were:

Imagine, whatever it may be!

For Samsung, this goggle-typed HMD was a complete new category. “There was a lot of concern about this whole new try from inside,” said JinGoo Lee(Senior Engineer, Samsung Electronics), who worked on the software. However, the employees had participated in the process and enjoyed with expectations and passion for the infinite potential of virtual reality. “There was so much energy – even more energy than you feel in other projects. Everyone had a pioneer mindset so obstacle after obstacle, we were more excited to find ways to tackle them rather than get discouraged or burned out.” 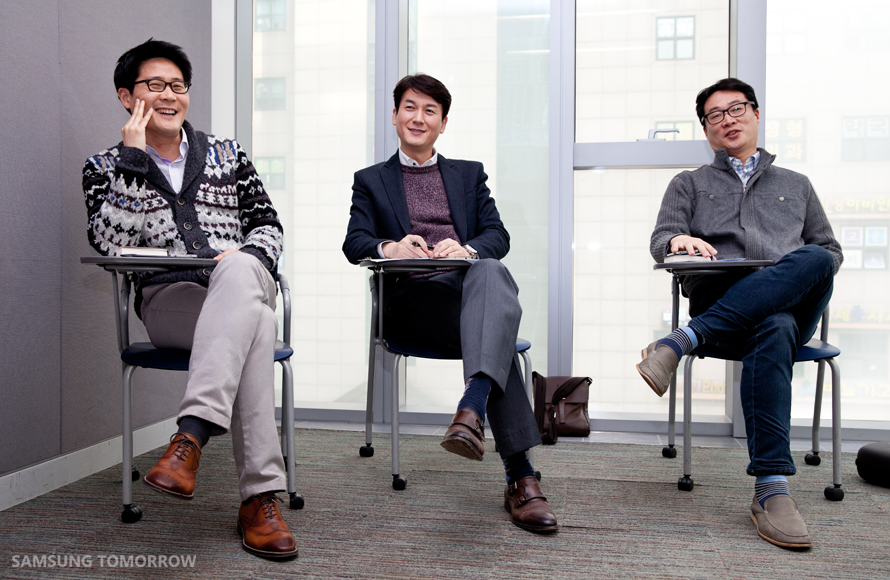 Samsung has opened up new possibilities of virtual reality based on its mobile technology, collaborating with Oculus. How big will be the possibility of the Gear VR? As the IoT(Internet of Things) connects all objects and creates endless possibilities, the VR technology will be maximizing the interaction between people and objects in the new environment of the virtual world. What will these developments lead to? How much more will we see? Let us know what you think in the comments below.

**All functionality features, specifications and other product information provided in this document including, but not limited to, the benefits, design, pricing, components, performance, availability, and capabilities of the product are subject to change without notice or obligation.