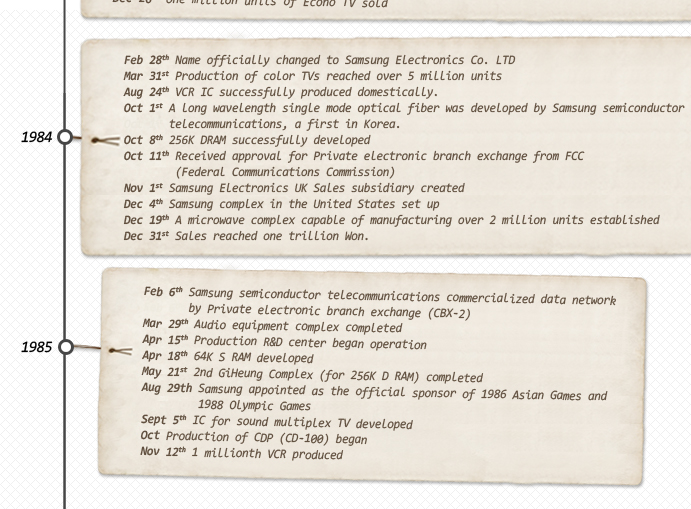 Only 3 months after successfully developing 64K DRAM, Samsung introduced the industry’s first 256K DRAM, well ahead of the competition. 256K DRAM was produced by only a few companies such as Intel, Fujitsu, and NEC.

Samsung Semiconductor was chosen as the official sponsor for 1986 Asian Games and 1988 Seoul Olympic Games. To ensure that both events would be successful, Samsung devoted an astonishing amount of time, energy, and resources. Installing communications equipment to connect 22 different stadiums would cost over 3 million Won. While Samsung provided the technology and equipment, they were also able to advertise the brand on the world stage. This promotion opportunity was maximized, and sales made noticeable gains. The greatest benefit was the fact that Samsung’s communications network was used in the world’s biggest sporting events, showcasing Samsung’s advanced technology to the world.

The next story will be Samsung Electronics’ Development of 1mega DRAM and the world’s smallest, lightest 4mm video tape recorder.