How C-Lab is Preparing for a Future Full of Potential – Part 1: C-Lab Inside

Samsung Electronics’ in-house incubation program C-Lab has been nurturing the innovative ideas of Samsung employees and helping bring them to fruition since 2012. The initiative is divided into C-Lab Inside and C-Lab Outside, with this year’s “Inside” projects focused on encouraging healthier and more convenient lifestyles.

A total of nine C-Lab teams will exhibit their work at CES 2020 in Las Vegas from January 7 to 10. While showcasing their work the teams will meet with future users from all over the world to discuss their ideas and try to determine how their innovations will be received. The C-Lab categories will be introduced in two installments, with Part 1 highlighting the five teams who were selected by the internal company venture program. 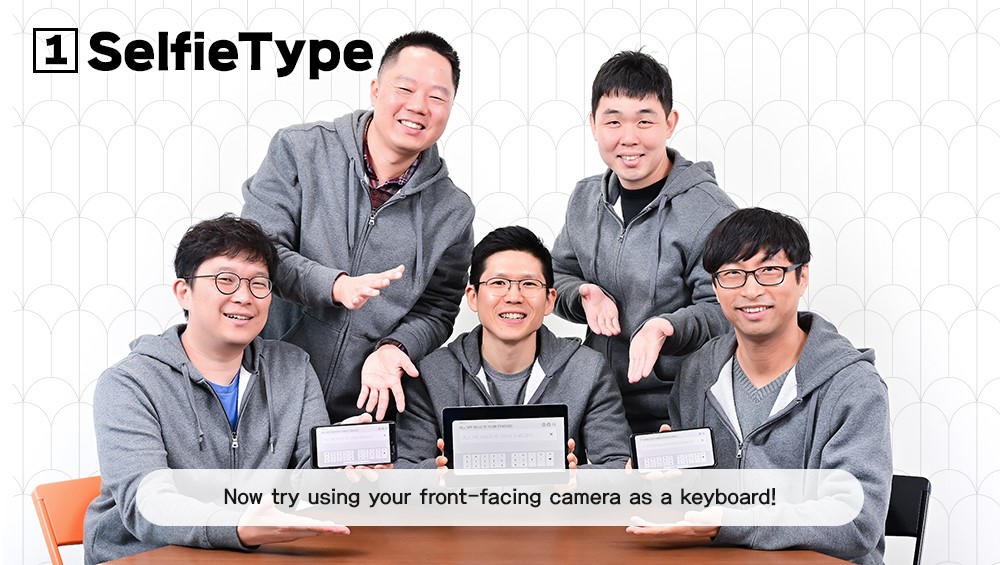 As smartphone performance has come to rival that of laptops, many users have begun using their smartphones to edit documents and write emails. Unfortunately, typing extended texts on a small keyboard proves uncomfortable, while using a portable keyboard requires the user to carry another sizeable piece of hardware around. Thus, the SelfieType team has come up with “the keyboardless keyboard.”

With SelfieType, the only keyboard you need is yourself. You just place your smartphone on any flat surface and hold your hands in the typing position. Then, when you start typing, the proprietary SelfieType AI engine will analyze your finger movements and convert them into QWERTY keyboard inputs on your smartphone. Except for an RGB, front-facing smartphone camera, the technology requires no additional hardware to enable user-friendly typing. Although current testing is based on English-language typing, the developers are planning to test the technology with other languages in the near-future. The team is also focusing on improving accuracy by enabling SelfieType to be customized according to individual users’ typing styles. SelfieType’s technology can also be extended to tablets, laptops and various other mobile devices.

“At CES, we’d like to receive feedback on how to keep improving SelfieType,” a member of the SelfieType team reports, “we want to see SelfieType shock the world!” 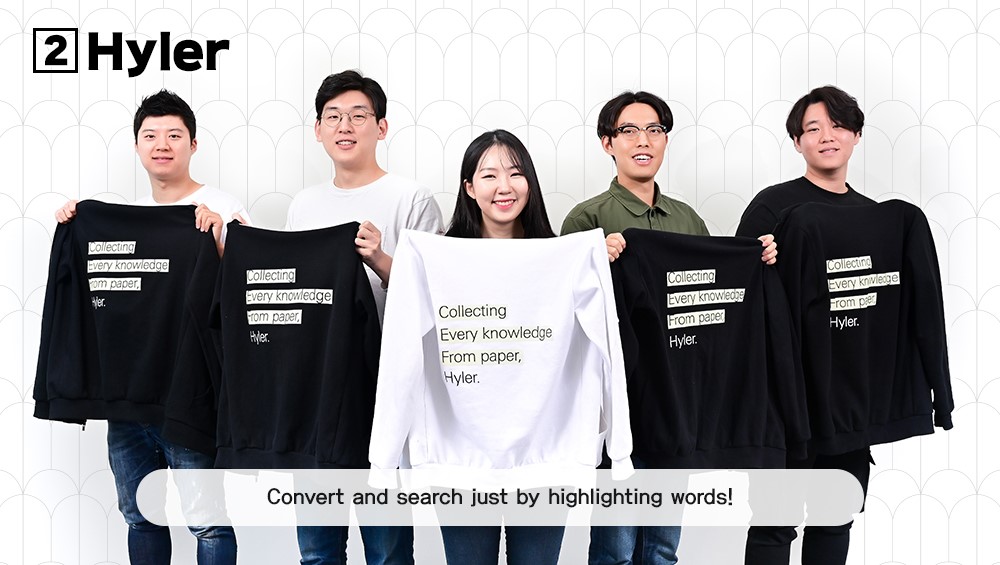 It was a love of reading that first compelled the members of team Hyler to find an easier way to clip excerpts from extended texts while reading them. In order to digitize texts, you would ordinarily need to type the information out manually, but Hyler allows you to transfer texts from paper to an app just by highlighting them with a pen.

On the outside, Hyler looks similar to a regular highlighter. But beneath the surface, it is much more. Hyler utilizes an optical module and line scan camera to capture text and send it to an OCR (optical character recognition) engine, which digitizes it. This technology can be seen in use in public parking lots which utilize technology that reads and records vehicle license plates. Handheld text scanning presents new challenges however, because of the margin of error that is introduced by the movement of the user’s hand. To address this, the Hyler team developed their patented “source matching” technology, which reduces both character error rate (CER) and word error rate (WER) by around 50%. This technology also allows the user to quickly and easily search for specific information such as figures, tables and numbers in the digitized text. The device can be turned on and off by simply removing or replacing the cap, and it can be used not only to clip text, but also to look up the meanings of words in a range of connected dictionaries and search engines. With a diameter of just 13mm, the device is slim and portable, and if you prefer to clip text without leaving marks on the page the device’s removable tip can be replaced with an inkless one.

“We imagine that people will use Hyler when they’re reading academic studies or working on long documents,” said a member of team Hyler, “Furthermore, we would like to see the texts that users digitize analyzed in order to gain insights into contemporary trends.” 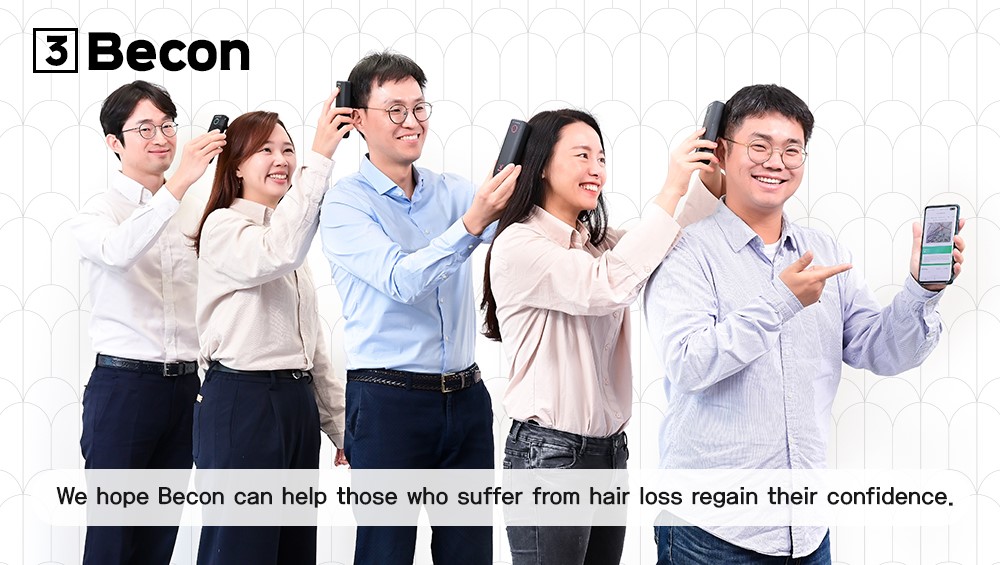 Minsuk Park, the leader of team Becon, started losing his hair in his 20s. For 10 years every hair loss medicine and special shampoo he tried was ineffective, while seeking professional treatment proved costly and inconvenient. “What if there was a way to get professional-level scalp care from home?” he wondered. This was the beginning of Becon.

To make a precise evaluation of scalp conditions, the Becon hand-held device and app can be used to analyze the 10 different elements of scalp health. These include: hair density, follicle count, texture, sensitivity, temperature, moisture and scent, among others. Becon uses a camera with 80X magnification, a CMOS sensor and a machine leaning-based algorithm to analyze the scalp, before recommending a solution that is tailored to the user’s unique condition. Once the user’s scalp has been analyzed, an AI algorithm selects from a list of more than 60 ingredients to design a customized shampoo that best fits the user’s scalp assessment. As time goes on, Becon collects data to deliver a diagnostic report illustrating the progress that has been made regarding the user’s condition.

“We want to keep improving our scalp diagnostic algorithm to provide accurate information to as many people as possible,” a Becon member commented, “As our goal is to enter the global market, we’re currently working on building a database of hair products from all over the world.” 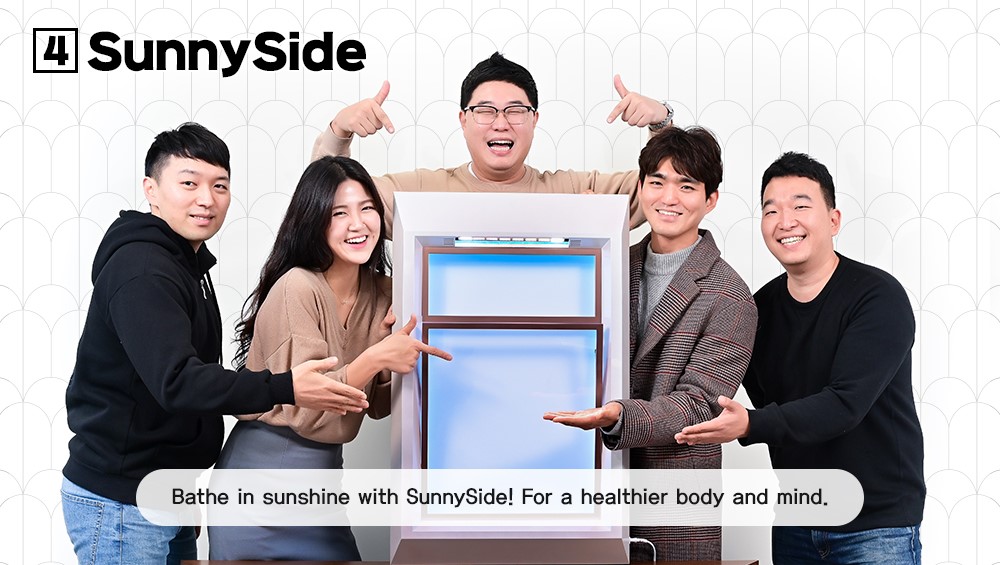 Every house has windows that face in different directions, and a room can often end up feeling cold and dark unless it has windows that face south. Because the human body only synthesizes vitamin D when you are exposed to sunlight, a lack of natural light can be bad for your health. What’s more, according to a clinical review published in the Journal of the American Osteopathic Association, around a billion people worldwide may have deficient or insufficient vitamin D levels. “Is there a way we could enjoy healthy sunlight whenever and wherever we want?” This was the question pondered by team Sunnyside, who put their minds to creating a window-like lighting device that would generate artificial sunlight.

SunnySide mimics the full solar spectrum, which makes the light it generates very similar to actual sunlight. The only difference is that it eliminates UVA, which leads to skin aging, while providing the UVB that is conducive to good health, resulting in the production of “healthier sunlight”. Sunnyside windows are easy to install anywhere, meaning that users can sunbathe indoors and in the process elevate their vitamin D levels without having to worry about skin damage. Users can use SunnySide for a more natural morning wake-up that will help alleviate insomnia and seasonal depression, then enjoy watching the device cycle from dawn, to noon, and finally to a red sunset. In cooperation with Samsung C&T, SunnySide was tested at the Raemian Gallery model house in South Korea. SunnySide was installed in the bathroom space, and the test found that synthesis of an appropriate amount of vitamin D – which would have taken around an hour in regular sunlight – was able to occur in only six minutes while the test subject was in the shower.

“Considering how many people buy bottled water and filter their air these days, it seems only natural that they will soon seek out healthier sunlight,” reports a SunnySide team member, “With SunnySide, you no longer have to go up onto the roof or drive to the beach to get some sun.” 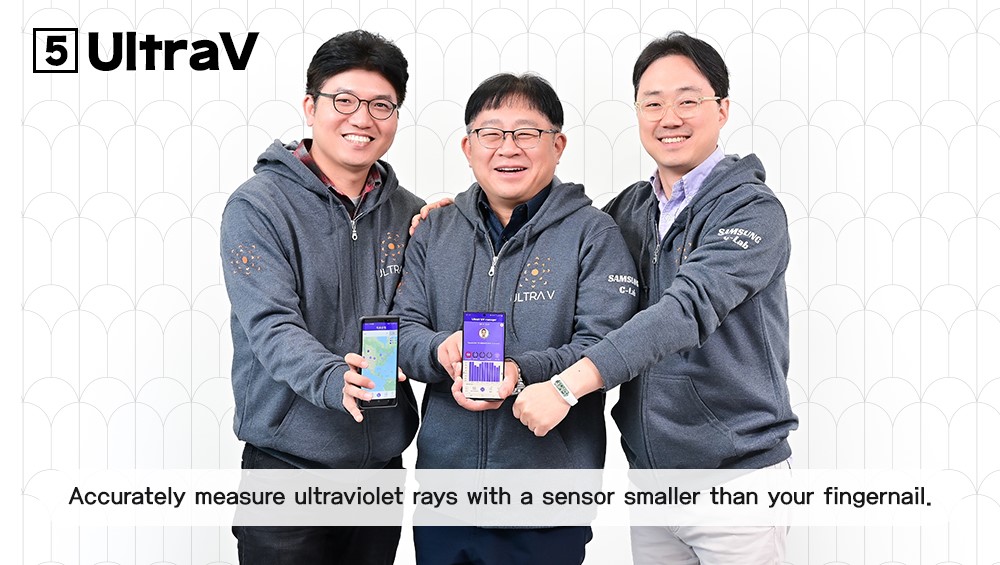 Receiving insufficient amounts of ultraviolet (UV) light can lead to increased chances of bone abnormalities and diabetes. However, receiving too much UV light can cause cataracts and skin cancer. Therefore, ensuring that your body receives the right amount of UV light is important. What’s more, the UV sensors currently available have different incidence angles at different solar altitudes, so it is difficult to precisely measure how much ultraviolet light you are being exposed to. The UltraV team was gathered to address this issue.

The UltraV ultraviolet sensor combines a proximity sensor and photochromic materials. The proximity sensor – which is made up of an LED and PD sensor – is mounted on a smartphone to conserve battery. The photochromic material becomes opaque when exposed to ultraviolet rays, changing the amount of LED light entering the PD and allowing the sensor’s firmware to produce UV index readings. Although the issue of sensitivity reduction according to angle is inevitable in this kind of sensor, the UltraV team were able to drastically minimize this effect to the point where the solution maintains 90% accuracy at an incident angle of 60 degrees. When equipped to a wearable device or smartphone, the UltraV sensor allows users to conveniently monitor the condition of their skin and their vitamin D levels and receive guidance if they are under or overexposed. This type of wide-field-of-vision UV sensor is one of the first of its kind, with patents already obtained in the US, EU and China.

“The sensor we have developed is smaller than a fingernail, which means that it can regulate sunlight intake not only through wearable devices, but also in automobiles and on building windows,” a member of UltraV related, “Our product can be used in an unlimited number of ways, so we are looking forward to seeing where it will best be applied.”