The countdown has begun! Just 36 hours to go until the Galaxy Note7 is unveiled. But you don’t have to travel to New York City, London or Rio de Janeiro to get a front row seat at Galaxy Note Unpacked 2016.

In fact, you can watch the big event as it unfolds, and learn more about the new Galaxy Note7 right after the event at www.samsung.com. And, with 360-degree live streaming, you’ll feel as if you’re really there.

With its larger screen and the functionality of the S Pen, the Galaxy Note7 lets you do more, from expressing yourself for fun to getting work tasks done. 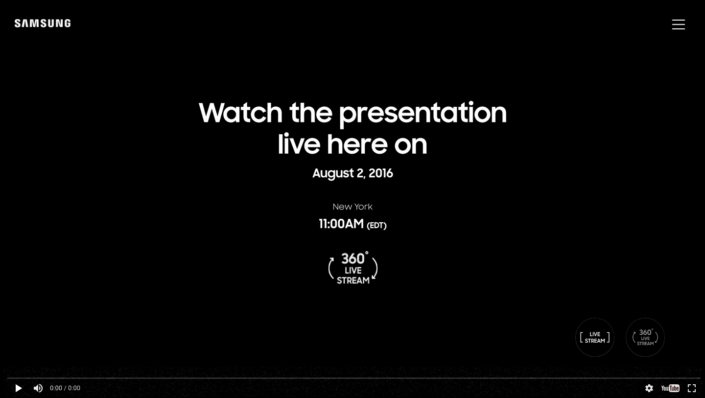 There are three options for live streaming the official launch event to experience the excitement of seeing the new Galaxy Note7 for the first time:

1. Visit www.samsung.com/galaxy or Samsung Mobile on YouTube when the event begins.

1. Go to the Oculus Store and search for the Unpacked 360 View app.

3. Launch the app using the Gear VR headset when the event begins.

Watching on the PC

The Samsung Galaxy Unpacked event will begin streaming on August 2 at 11 a.m. (EDT).