How Samsung cultivates Design Talents: What it’s like to be a SADI alumni

Established in 1995, SADI(Samsung Art and Design Institute) will celebrate its twentieth anniversary next year. Through SADI, Samsung has been fostering design talents having strong fundamentals and hands-on experience.

Following the interview with the President, we at Samsung Tomorrow reached three SADI alumni, ones from each department: Communication Design, Fashion Design, and Product Design. When did they first dream of being designers and why did they choose SADI? What were their school days at SADI like and what does SADI mean for them currently working as designers? Let’s check it out now. 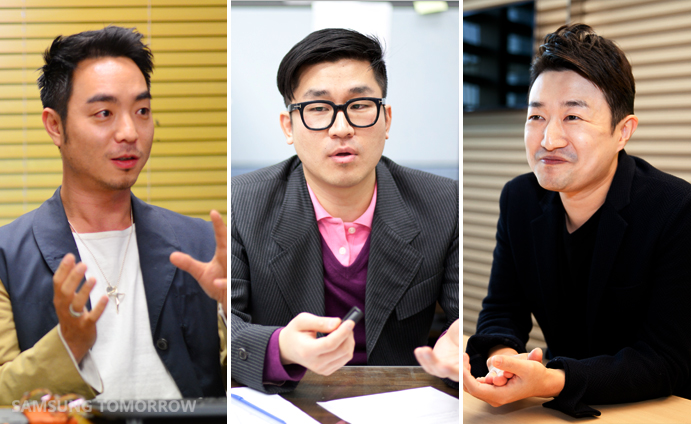 SADI, an Opened Door to Design

“I managed to enter SADI last on the list. But after three years, I graduated at the top of the class.” Jaeyong Jang (SADI Communication Design, Class of 2006) said SADI was a turning point of his life. What brought him to design and how was the process for entering SADI?

“Before entering SADI, I was a college student majoring in international trade. But since I had selected the major based on my CSAT(College Scholastic Ability Test, South Korea) scores only, it didn’t really suit me. I rarely studied and was into my hobbies like playing the guitar and drawing cartoons. One day, my sister who worked for advertising company told me about SADI, saying design major might fit me. I prepared a portfolio in a hurry and applied for SADI. Actually, I knew just nothing about design at that time and thought it would be impossible to be accepted,” he recalled. 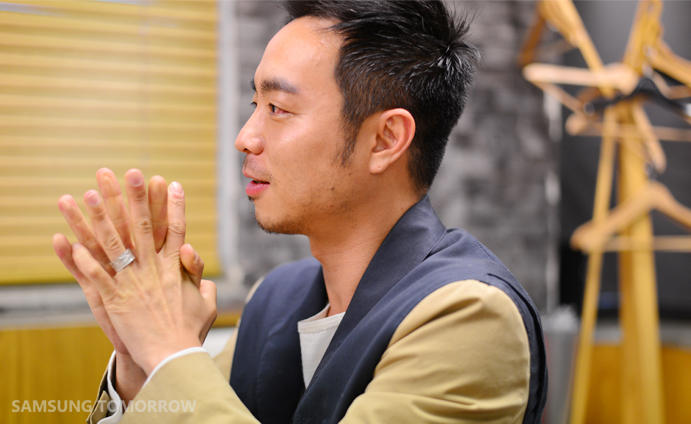 ▲“If SADI had applied same standards as any conventional design schools,
I would never have been accepted,” said Jaeyong Jang.

“At the performance test, I panicked from being surrounded by students who drew really well. I’d never officially learned how to draw. I just enjoyed drawing cartoons alone. So I drew a cartoon.” After the test, Jang said he was very discouraged, assuming that he failed. However, an unexpected result was delivered. He was given an interview opportunity. “Looking back on it now, it was funny how frankly I answered at the interview. But I think the professor saw my character and potential positively. If SADI had applied same standards as any conventional design schools, I would never have been accepted,” he added.

For Hyun-Min Han (SADI Fashion Design, Class of 2011) as well, SADI was an opportunity that opened a door to a transition of his path. “My major was graphic design. But while studying it, my interest turned into fashion. Looking for ways to major in fashion design, my friends introduced SADI to me. Searching for information about SADI, I found it has a solid curriculum and I thought it could be a good opportunity for me. It really was one of the best choices of my life.” Now as a fashion designer, he is proud of the fact he graduated from SADI.

Currently working as a product designer at Samsung, Dongseok Lee (SADI Product Design, Class of 2009), also entered SADI after deciding to change his major. “I was an engineering student before entering SADI,” he explained. “It was when I attended a language program in New York that I got interested in design; in New York, I was exposed to various designs in daily life. When I started to think of changing major to design, one of my friends who was a student at Parsons and SADI graduate, told me SADI was opening Product Design major.” After careful consideration, he became convinced of his sincere interest in design and that SADI would be a good place for him. That year, Lee applied for SADI and became one of the first Product Design major students.

Building the fundamentals of Design

Since SADI, they shared the common experience of changing their paths. SADI is actually known for students of various backgrounds. Now, what were their school days like? We asked about classes they took. 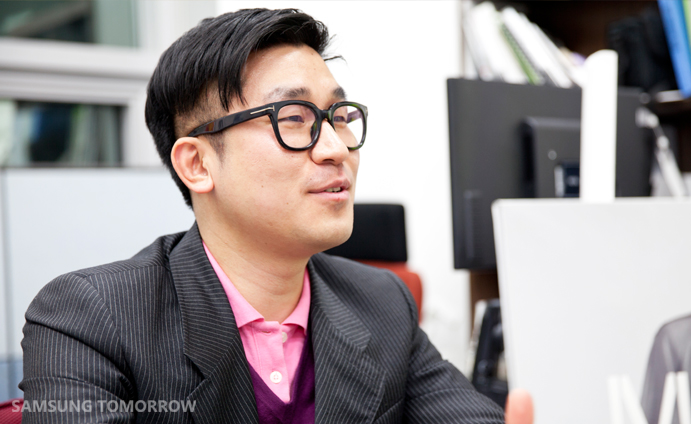 ▲“Foundation Course is one of special benefits of studying at SADI,” said Hyun-Min Han.

“At SADI, you can meet various students having diverse backgrounds from Economics, Architecture, or Psychology. Not only to build up fundamental design skills before entering major courses, Foundation Course is a good opportunity to learn from other students of various backgrounds. I was often inspired by different points of view and it was really impressive. I think it is one of special benefits of studying at SADI,” said Han.

Jang also said that Foundation Course was the most memorable. “Since I was totally a newcomer to design, I used to feel small among students with design education backgrounds,” he explained. “However, thanks to professors of Foundation Course who cared about design newcomers like me, I could adapt to classes and have confidence.”

He added ‘Drawing Fundamentals’ class was unforgettable. “In particular, I was grateful to Prof. Jeong-Yoen Rhee of Drawing Fundamental class. She always encouraged students without design or art backgrounds. It was a class practicing basic drawing techniques and I was different from other students even in the way of holding a pencil. But the professor respected the way I was and didn’t try to correct me in a certain way. Instead, she honed my skills to be more polished,” he explained. “Professors at SADI try to respect individual’s characteristics and help them develop in harmony with existing frame. I think it is one of SADI’s educational philosophies developing students to be more creative based on fundamentals.”

A Gateway to Professionalism

After the Foundation Course for two semesters, students at SADI begin to take Major Courses by department. Dongseok Lee said that curriculum at SADI is organized to develop specialized capabilities and elaborate on them through various hands-on experiences.

“Most professors at SADI are working in the design field and sometimes designers are invited to class to deliver lectures. It helps us keep up with the latest trends of the industry while learning practical skills,” said Lee. 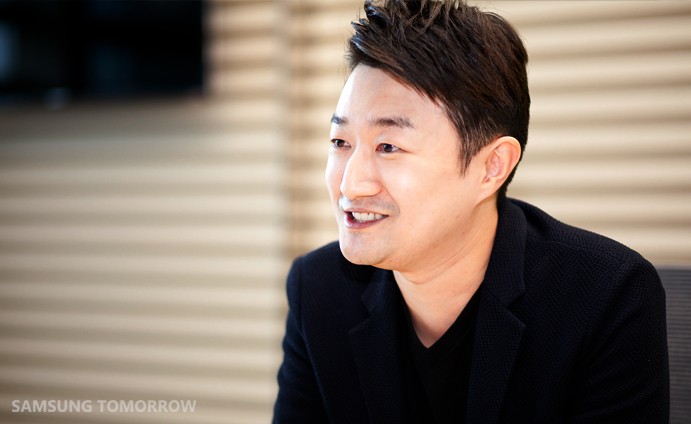 At SADI, students must complete an internship in the third year as a graduation requirement. Also, they are to participate in a variety of industry-academia partnership projects, which deliver opportunities to be engaged in the process of actual work. “You can experience various projects which are similar to those carried out in the actual work. It allows you to successfully settle into actual work after graduation,” he explained.

Lee, meanwhile, said there are also differences between working as a student and as a professional designer. “At school, you learn a wide variety of subjects in order to be exposed to various opportunities; in a company, on the other hand, you’ll focus on specific tasks and items. As for me, – you know there are many kinds of products at Samsung such as TVs, mobile phones, and cameras, – I’ve been focusing on laptop design. In short, you build up a broad basis at school, and then enhance expertise working at company by focusing on particular tasks and items.”

Han, who has been running a personal brand, added, “For me, there is not much difference in content of the work. However, when I was a student I could make clothes to suit my tastes, but now I also have to consider things like demand and marketability as well.” Jang also explained. “In other words, the point is who to satisfy. When you are a student, the result can be for self-satisfaction. But when in actual work, it’s important for customers to be satisfied with the result.”

Lastly, we asked them to give some advice for those who are interested in SADI or want to be a designer.

“I was someone who just loved music and cartoons, but was ‘vague’ about future direction. SADI is, if you ask me, a place that made me discover my potential and changed my life. If you have passion for design, I believe SADI will be another turning point for many of you as well.” (Jaeyong Jang) 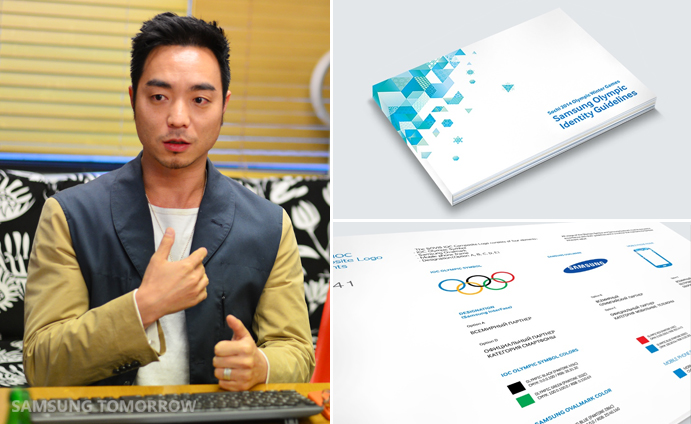 ▲Jang is a director of Graphic Design Division at VEIG. ‘VEIG’ is a phonetic transcription of an adjective ‘vague’, which means “A vague feeling that you feel when you start something new is the beginning of creativity.”

“I learned a lot of things not only through excellent curriculum and professors but also by social experiences at SADI. While working as a student leader in the second year, I could strengthen social skills which are of help in my current professional life. SADI is my pride as a fashion designer and I strongly recommend SADI to those who want to be a designer.” (Hyun-Min Han) 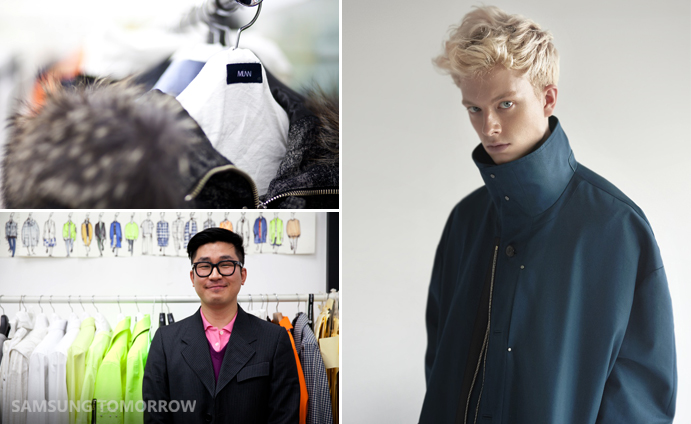 ▲Han is a creative director of  MÜNN , creating styles of highest quality with differentiated details.

‘MÜNN’ is a German pronunciation of ‘Min,’ the word from his name ‘Hyun-Min.’

“I was a late starter in the design. At first I worried about changing my major, of course. However, if you are sure about what you really want to do, studying at SADI will be a great opportunity especially for those having different academic backgrounds, because SADI is a place opened for various members to find creative solutions.” (Dongseok Lee) 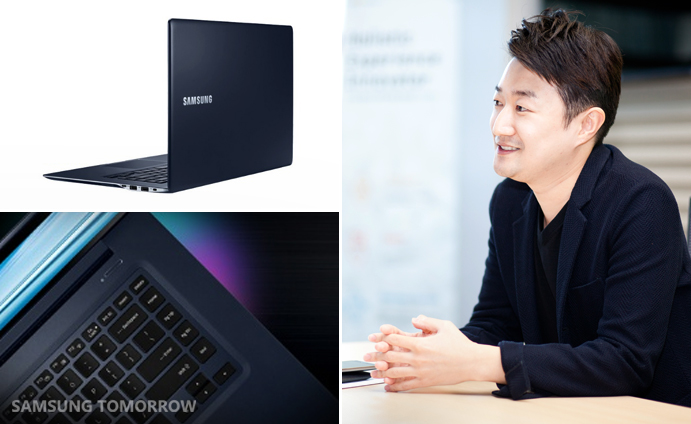 Interviewing with the three SADI guys, even the word ‘passion’ seemed to be insufficient to describe them. Are you already wondering who will be the next students to follow these three? Or, are you thinking of becoming one yourself?