How Samsung Described the Galaxy S5 in the Beginning

Since the global launching of the Galaxy S5 on 11th of April 2014, it has become available in around 150 countries and 350 service providers. Do you remember when and where it all started? On 24th of February, Samsung held the Samsung Unpacked 2014 at Barcelona, Spain. It was at this event that the Samsung flagship device Galaxy S5 was announced, along with three new wearable devices: Samsung Gear 2, Gear 2 Neo and Gear Fit.

The Samsung Unpacked 2014 was about 50 minute long altogether, with the keynote speech clocking in at about 11min. For our part, Samsung Tomorrow held our own live broadcasting of the event as well, which included live streaming and live blogging. Randomly reminiscing on something Confucius once said, “Study the past if you would define the future,” we decided to take an opportunity to look back at the beginning of the next big things to see if we missed anything along the way. (Below is the video of the full Samsung Unpacked 2014 event, in case you want to randomly reminisce with us.)

What we found reviewing the keynote speech was that some words were used more frequently and emphasized more than others. For example, the word ‘consumer’ is used 12 times, or about once a minute. Similar words like ‘people’ and ‘customer’ were used 4 and 2 times, respectively. It quickly became pretty apparent what the focus of the Galaxy S5 was.

There are other words that were used quite frequently. ‘New’ was used 8 times, while ‘Innovation’ and ‘Useful’ were both used 4 times each. The concept of the Galaxy S5 could be described as the new useful innovation.

With special thanks to Wordle.net, a website that literally puts words together in a shape of a cloud adjusting for size based on the frequency of words used, we got our own ‘word cloud’. When we apply the words that were used during the Samsung Unpacked 2014, we got the word cloud below. 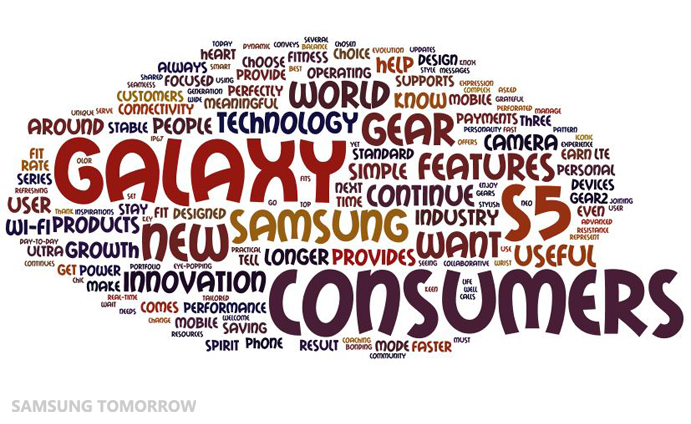 Needless to say, the keynote speech is a very carefully crafted event. After all, it is the first time Samsung gets to describe the product and its features, design, and purpose to the whole world, officially. Therefore, we can safely assume that Samsung thinks these words best represent what the new devices are all about.

So far, we at Samsung Tomorrow agree. After bringing you all the latest news and info on the Galaxy S5, such as the camera, display, S Health, features (hidden and accessibility), sensors, design, photos, videos and more (pretty much everything we can), one thing we feel (and hopefully you do too) is that the Galaxy S5 really focuses on the ‘usefulness for device users’. Even before Samsung decided to put Galaxy S5 together, they wanted to make a device that enhances the features that smartphone users use most frequently, while focusing on the lifestyle trend of staying fit, simultaneously.

So we would like to ask the actual Galaxy S5 users. What do you think about your new Galaxy S5? Do the words above describe your smartphone?