The International Committee for Display Metrology convened for its general meeting in San Francisco on May 24. As a result, display quality measurement methods are expected to change. With different display manufacturers now offering various types of technology for producing images, the committee concluded that new methods for measuring display resolution quality are necessary. For our readers, Samsung Newsroom has summarized the details of the meeting in 6 sets of questions and answers:

Q1. What is the ICDM and what proposals were submitted at this year’s general meeting?

A. At the most recent ICDM general meeting, international standards for measuring display performance were discussed, given the limits of conventional measurement methods.

The ICDM is an international organization that develops display performance measurement standards. It is a part of the SID (Society for Information Display), which is an industry organization for electronic displays. Display experts from around the world, certifying authorities, and display manufacturers—including Samsung Electronics, LG Electronics, and Panasonic—are members of the ICDM.

Conventional displays employ RGB (red, green, and blue) technology, but new display layout technologies use RGBW (RGB plus white), triggering a discussion on the need for a change in how display quality is measured. The current measurement methods were developed in the analog era, so are not appropriate for more recently developed displays. Therefore, it is necessary to develop new measurement methods. (Further details on RGB and RGBW are described below.)

Q2. What decisions were made at the general meeting?

First, it’s not appropriate to employ current resolution measurement methods to measure newly developed display layout technologies like the RGBW. This is because a) the new technologies do not fit in the previous definition of sub-pixels, b) there are differences in resolution between black-and-white and color scene, and c) there are differences in clarity when tested with grille pattern by an arrangement order of black-and-white lines. In this regard, the ICDM clarified that new measurement methods should be developed.

New display technologies (pixel layouts) make the current measurement and calculation of display resolution, according to 7.1, 7.2 and 7.8, incomplete. Care should be taken when interpreting the results. New resolution measurement methods should be added.

Contrast modulation (Michelson contrast) Cm is considered by some to be the best and most complete single-metric description of the ability of a display to exhibit information. 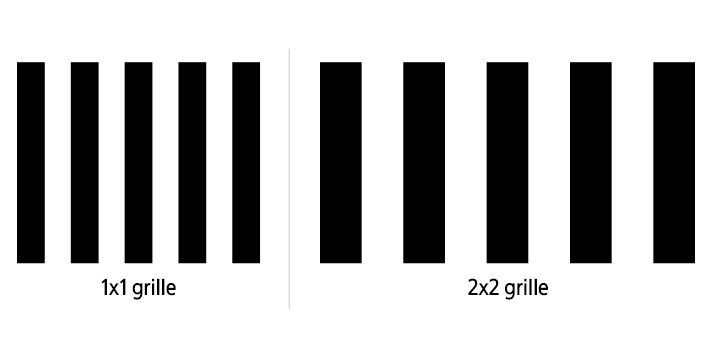 Q3. What is the difference between RGB and RGBW displays?

A. RGBW displays use a white LED, so picture quality and contrast modulation are reduced.

Displays use red, green, and blue lamps as the primary color lights. Red, green, and blue subpixels are arranged in order on an RGB display so that the display can exhibit colors and straight lines more accurately. However, a RGBW display uses a white subpixel as well as the three primary color subpixels. This allows RGBW displays to have a relatively higher aperture ratio, but at the cost of color reproduction and contrast modulation.

Q4. What is contrast modulation? 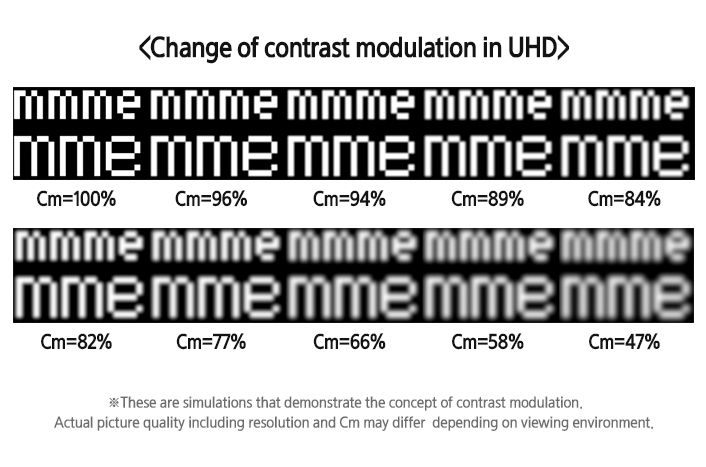 Q5. How much contrast modulation is necessary?

Q6. What changes will these revised standards bring?

A. The conventional pass-fail method of evaluation is about to completely change. Contrast modulation will be the only method to describe display resolution.

The ICDM said that the current display resolution measurement methods were incomplete because they use a pass-fail test that applies random criteria, determined by each manufacturer, to black-and-white measurement values. Therefore, the ICDM said it would look to change the current pass-fail method for a system that combines black-and-white measurements and color measurements, and makes those results open to the public. Until that new measurement system is established, the ICDM announced that all manufacturers should report both the number of lines (or in the form of #### x #### pixels) as well as contrast modulation (Cm).

Once the new measurement methods are established, contrast modulation will be the only method to describe display resolution, giving users a better understanding of display performance.

(3) Reporting Michelson Contrasts Using Thresholds: … (We realize that making a mandatory requirement of reporting the contrast can be viewed as a departure from the general philosophy of this document as noted in the abstract on the title page and in the Introduction. However, we also wish to avoid the lack of a measurement result that the pass/fail thresholds can introduce; thus, we want to be sure that the measurement result is also available to all.)…

(6) Use of Thresholds: We also anticipate that the use of thresholds as guidelines will discontinue in any new metric and will be replaced by measured levels.