IFA 2014 ended last week, and some of the staff here at Samsung Tomorrow seemed to be experiencing symptoms of withdrawal, looking completely lost at the office. Noticing the looks on their colleagues’ faces, some senior staff offered solace. “I went through that when I was there for IFA 2006.”

2006? That is like 2 World Cup’s ago, which coincidently was also held in Germany. It sparked a conversation comparing Samsung at IFA 2006 and 2014. Here are  a few things we came to realize.

IFA has been an annual event since 2006, and was held biannually before that. It was held in Messe Berlin and Samsung’s booth was located in hall #20, which was considered a prime spot given its size (3900 square meters).

Earlier this May, Messe Berlin welcomed a new 8727 square-meter venue called CityCube Berlin, which Messe Berlin invested 83 million Euro to build. For the 54th IFA, CityCube, which is twice the size of Hall #20, was solely dedicated to Samsung to exhibit its latest products.

IFA welcomed Samsung setting up its exclusive booth at the CityCube. “We expect great synergy working together with Samsung, a company with world class technology,” they stated last May at the Pre-IFA event.

Back in 2006, it was all about MP3 players. At IFA 2006, Samsung announced the YP-K5, the first MP3 players with a music sharing concept. It generated a lot of buzz partly for its built-in speaker, which popped up like a slide, and was impressive for such a small device.

TVs were actually a big hit at IFA 2006. Samsung showcased the bestselling ‘Bordeaux’ LCD TVs (named so because of their wine-glass-style design)  and lineups for Full HD TVs, which eventually put Samsung ahead of the game,  letting them set trends in the TV industry. 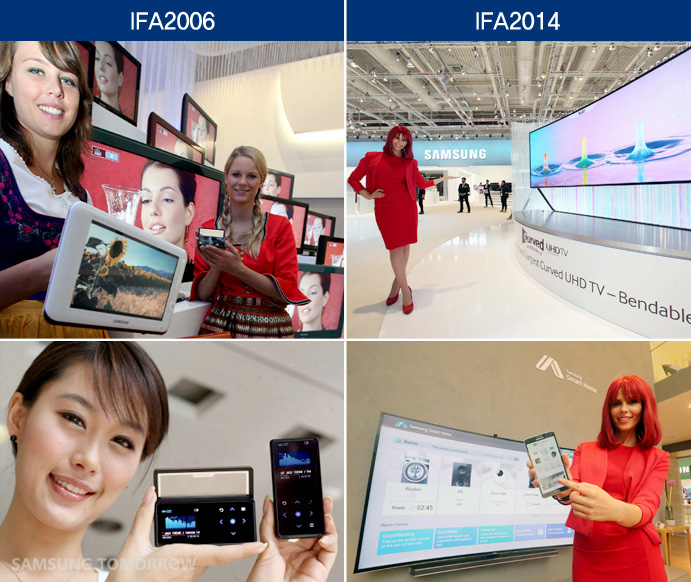 At IFA 2014, Samsung once again showcased a wide range of advanced TVs, such as the 105” Bendable UHD TV and Curved UHD TVs. It also announced the Curved Soundbar, offering a ‘Total Curved Solution’. Through IFA 2014, Samsung reaffirmed its position as the #1 in the TV industry.

People were also raving about the ‘Premium Lounge’ in the Digital Appliance zone, a dedicated booth for Samsung’s premium kitchen appliances, the Chef Collection.

– Ovens that can cook with High-Pressure Steam

– Induction that utilzes Virtual Flame for safety and usability

Especially, under the theme of ‘Bringing Your Future Home’ Samsung installed the Smart Home booth at this year’s IFA. It not only showcased the capability to connect various types of product, but also the ability to connect non-Samsung products as well, addressing the current state of Smart Home.

The structure of the Smart Home booth was similar to a regular house. It consisted of a front door, a living room, a kitchen, a laundry room and an office. Samsung held a number of scheduled demonstrations to show people how Smart Home actually works.

Prior to IFA 2014, Samsung held the Samsung Unpacked 2014 Episode 2. Around 1,500 people participated, eager to see the next big thing. Among other things, Samsung announced the highly-anticipated Galaxy Note 4, the 4th Note series since the first 5” Galaxy Note with the S Pen.

– Galaxy Note Edge with a curved display on the edge

Point #3 TVs were cool. This year, they got cooler.

The technological advancements that have been achieved over the past 8 years is quite astonishing. Let’s take TV, for example. Back in 2006, most of the TVs were HD, while Full HD TV was introduced for the first time. Over the 8 years, we’ve seen TV evolve from HD (1k resolution)->Full HD (2k) to, finally, UHD (8k).

Design has evolved greatly as well. 8 years ago, it was all about LCD TVs and Flat panel TVs. This year at IFA, Samsung showcased the Bendable TV, which was very popular among the exhibitors.

The first half of 2006 was all about Samsung ‘Bordeaux’ LCD TVs. People really liked the blue and wine color applied at the bottom of the TV, which made it look like red wine in a glass. So if you take a look at the images from the press release for TVs now and then, you can definitely feel the difference in design.

8 years later, Samsung recorded 34 straight quarters with the #1 market share in flat panel TVs with a share of more than 30%. This is twice the share as 8 years ago.

Point #5 Keynote Speech shows the Difference in each

In 2008, JW Park said, “Based on the unique leadership of Samsung Electronics, we will work to provide consumers with Seamless Experience to eliminate Digital Fatigue and Digital Divide”  The next year BK Yoon said “Building upon the 5E(Essence•Engagement•Expression•Experience•Eco) leadership, Samsung will add human value and emotion in digital technology. We call this digital humanism.”

At this year’s IFA keynote, the keyword was the ‘Future Home” BK Yoon offered his vision for future home.  Called Adaptive Home, it consists of Show Me Home, Know Me Home and Tell Me Home.

BK Yoon said that the biggest transformation will start from Home. He said “We need a lifestyle oriented innovation where a future home understands the need of consumers.” While emphasizing the importance of partnerships he also said that “Samsung will take a lead in realizing the future home.”

So what do you think about the past 8 years? The difference is quite staggering isn’t it? We can see that Samsung has continuously pushed the boundaries for technological advancement year after year. Which was your most memorable IFA? Which was your favorite product at IFA 2014? Leave a comment below to let us know! Thanks!