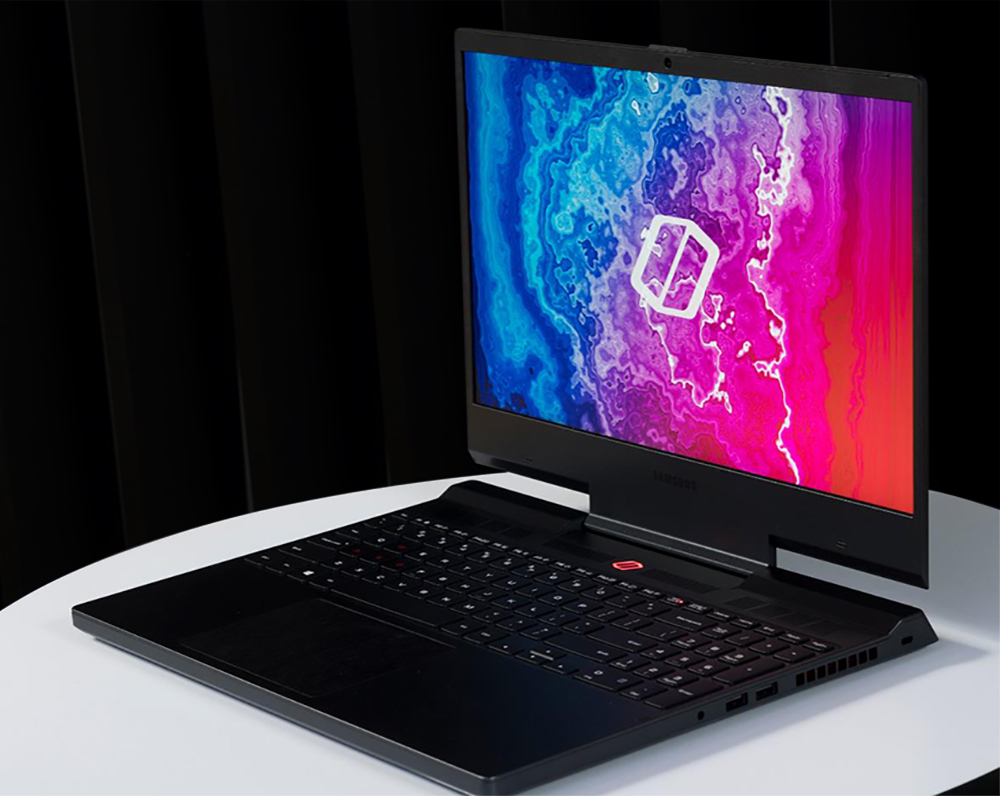 Perhaps one of the hardest missions for gaming laptop users to tackle is overheating. Some even say that heat itself is the enemy, as it can slow down gaming performance and become the critical difference between winning and losing.

On May 16, Samsung Electronics released the new Samsung Notebook Odyssey in the United States. Loaded with a dual cooling system to maximize heat-dispensing capacity, it has cool specifications such as the 8th Generation Intel Core i7 processor with six cores, NVIDIA® GeForce RTX™ 2060 graphics card and others. Samsung Newsroom looked into the updated Notebook Odyssey with a thermal imaging camera to see how it deals with a heated gaming session.

Moreover, the updated Notebook Odyssey creates an airflow that is 15 percent stronger by reducing the thickness of the blades by a third (0.25㎜). This is how the Notebook Odyssey ensures the best performance of the laptop by removing internal heat, while quickly absorbing fresh air on the top and the bottom.

Some may wonder whether a laptop can address heating issues at the same level as a desktop. So Samsung Newsroom played a first-person shooter video game “Battlefield V” on the Samsung Notebook Odyssey to put all doubts to rest. One of the first things we examined was the System Status Dashboard, which allows users to check the Graphics Processing Unit (GPU) temperature, Frame Per Second (FPS), CPU temperature and other aspects while playing games in real time.

The temperature of the GPU and the CPU stood at 72℃ and 81℃ respectively (above, left). We also measured the external temperature of the laptop with a thermal imaging camera to gauge the level of heat the user might feel. The hottest part was the center of the hinge (between the screen and keyboard) which was 26.8℃ (above, right). The highest temperature recorded was in the user’s left hand, which peaked at 31.2℃ and is represented in white in the picture taken by the thermal imaging camera.

While playing the game for about 30 minutes, the temperature of the GPU and CPU peaked at 79℃ and 91℃ respectively (refer to the left picture above). The thermal imaging camera recorded a maximum temperature of 34.2℃ at the center of the keyboard, which is the most frequently used area. While the laptop generates a certain amount of heat after this time, it had a minimal impact on gameplay as the heat was localized to the center of the keyboard.

Thanks to its portability, if a user has to move when gaming, they can close their Notebook Odyssey and carry it with just one hand. Therefore, it is important to check the temperature of the laptop’s back and the heat remaining on the table through a thermal imaging camera. The peak temperature was 34.3℃ (above, left) on the back center of the new Notebook Odyssey after playing the game. The edges of the laptop were far cooler than the middle. After removing the laptop, the remaining heat on the table was 28℃ (above, right) which is cool enough that the user can touch the table with his or her bare hand. 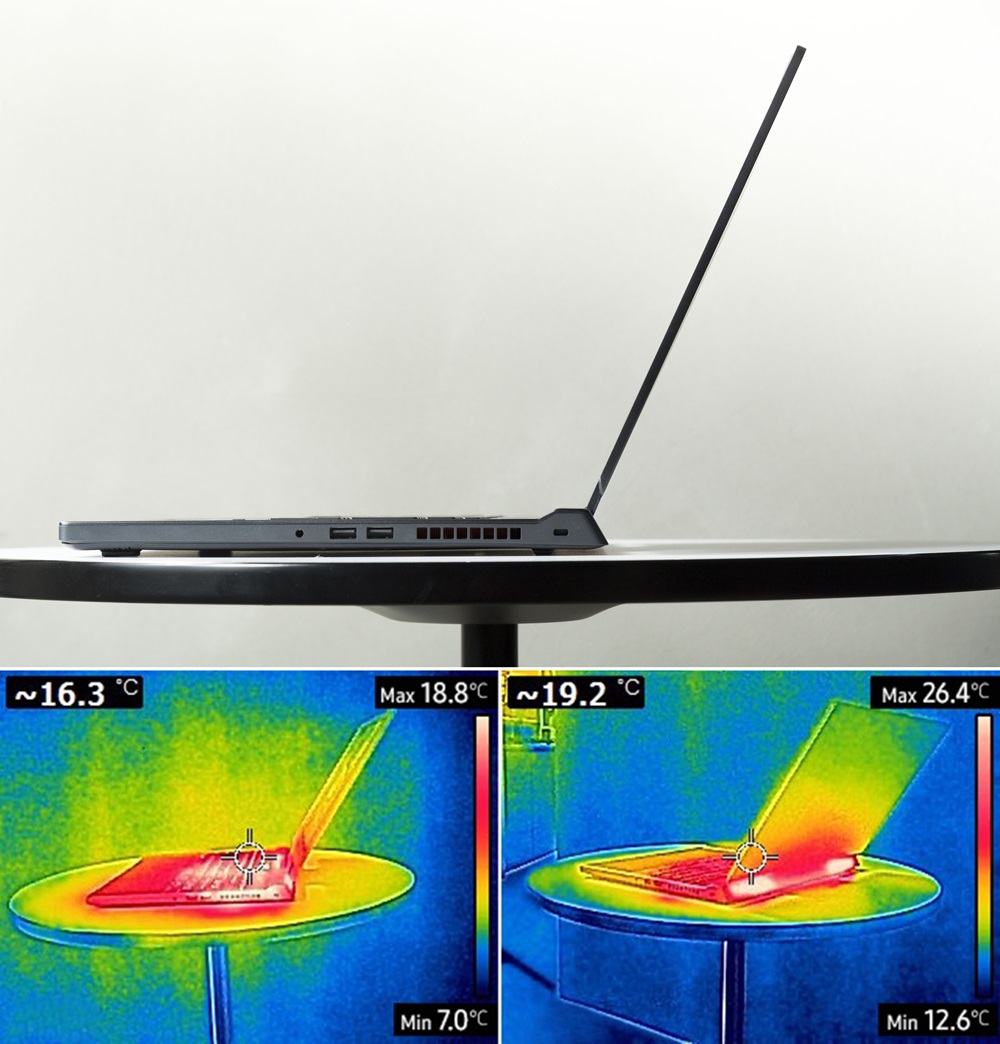 Another reason why users of the new Samsung Notebook Odyssey don’t feel the heat is because of the laptop’s unique ventilation system. The laptop is designed to draw cool air in from its bottom and the keyboard and then expel warm air through the back and sides, so that the heat doesn’t reach the touchpad or the user’s face. 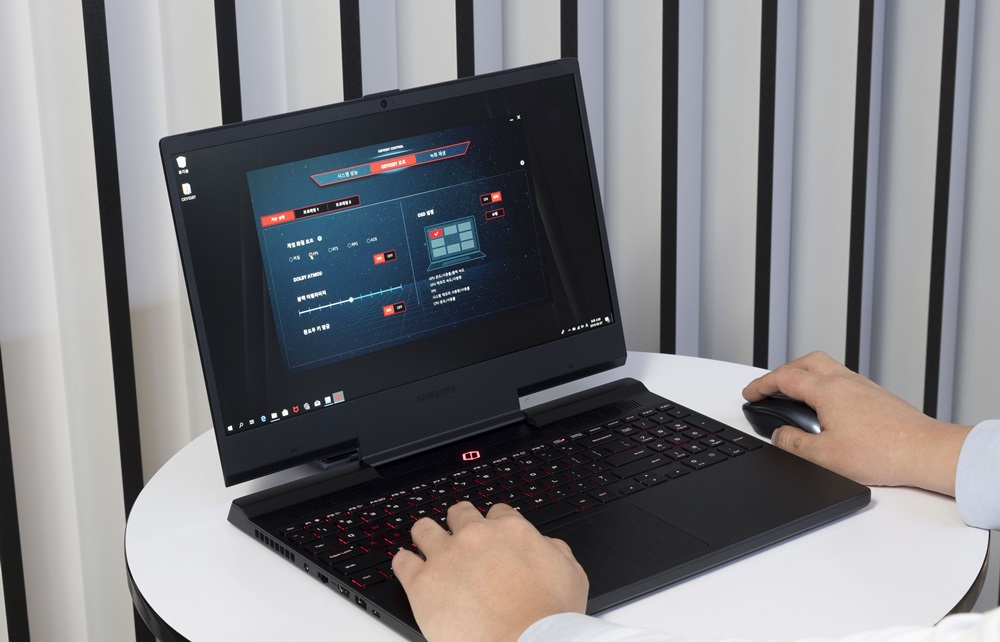 Another exclusive feature of the updated Notebook Odyssey is Odyssey Mode. Users can save settings presets in advance under different profiles for various types of games and press Fn and F11 simultaneously to launch Odyssey Mode. Users can also toggle a number of other features and options, including Beast Mode, Black Equalizer, Dolby Atmos, settings to optimize resolution for the game genre, and the Windows key and touchpad.

Beast Mode enhances the desktop-like performance of the NVIDIA® GeForce RTX™ 2060 graphics card. The FPS (refer to the upper right of the picture above) ranged 80 to 90 before starting Beast Mode. If a user enables Beast Mode in the middle of playing a game, they will notice an increase in FPS, making movements on the display seem livelier.

Black Equalizer allows users to control the black levels of the display from 0 to 100 percent. They can clearly see the differences between 20 percent (basic mode), 60 percent (profile 1) and 90 percent (profile 2). Users are able to adjust the shade and brightness to their comfort, helping them to uncover enemies hidden in the game. By modulating black levels according to the different backgrounds in the game – such as canyons, plains, sky – users might be able to improve their gameplay.

The new Samsung Notebook Odyssey is engineered to have formidable performance, an efficient cooling system, and exceptional gaming technologies. The product is optimal for carrying in a backpack as it has a 15.6” display and is 2.39kg in weight and 19.9mm thick. The New Notebook Odyssey is the natural choice for those who are looking for dynamic gaming gear.