In the world of the metaverse, there’s a mysterious planet that fills you with wonder, making you feel as if you are in a sci-fi movie. On this planet live aliens who love lemonade. These aliens work at the Samsung Station and conduct research on Samsung Electronics’ new products. This magical world exists in the realm of Space Tycoon. Samsung invites you to experience the exotic and fantastic world of the Samsung aliens.

This universe is called Samsung Space Tycoon, an experimental virtual space that Samsung recently launched on the popular metaverse platform, Roblox. Space Tycoon is a virtual space where users can build and customize real Samsung products themselves in the metaverse.

The idea for the space came from the joke “Samsung must’ve hired an alien,” a joke that people make whenever Samsung launches an innovative product. The designers imagined a world where ‘Samsung’s aliens’ would create a universe that they would also live in. This world would be an advanced environment with an abundance of resources, somewhere in the bright future that would allow aliens to research and create new products. In Space Tycoon, young consumers, including Generation (Gen) Z, can naturally interact with the Samsung brand and enjoy more personalized experiences inside the metaverse.

In order to learn the full story behind the development of this virtual space on Roblox, Samsung Newsroom met with Soojung Lee, Jaeik Lee, Yeonee Choi and Doeun Shin, the designers on Samsung’s Corporate Design Center who led the Space Tycoon Project. 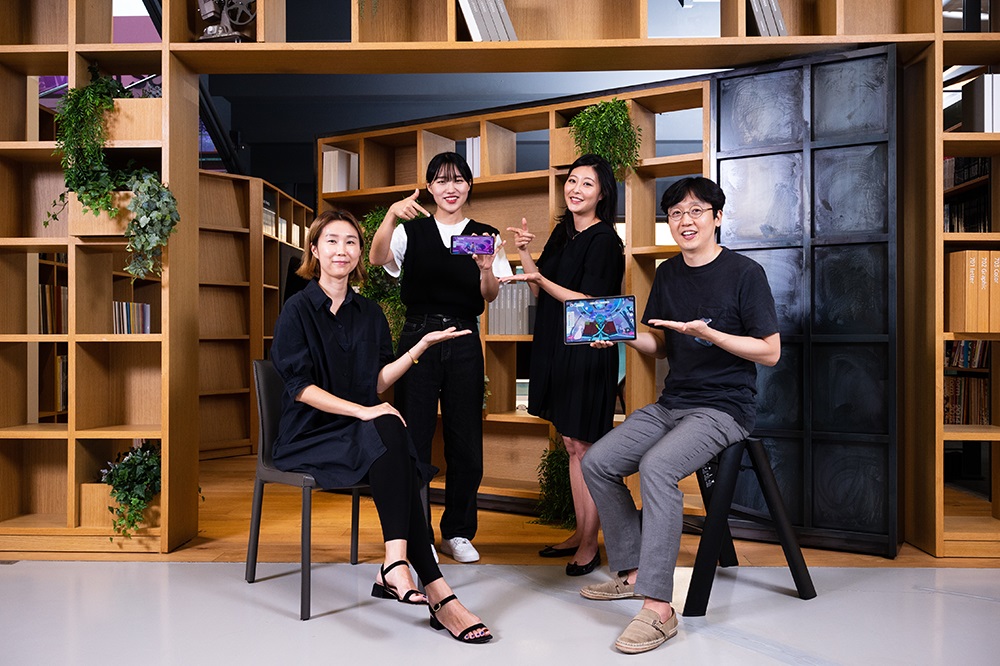 From Making Home Appliances to Decorating Your Lab With Aliens: How To Experience Samsung in Space Tycoon

When entering Space Tycoon, the game begins with a story task asking the user to create a virtual product with Samsung’s aliens. Users can extract minerals in order to make and manufacture Samsung products in the Lab. With the products they have made, users can collect coins, which can be used to purchase smartphones, vacuum cleaners and other products. In addition, users can buy a variety of avatar items to customize their characters, and there are various events and entertainment available in the space as well.

“We began this project with the hope that the younger generations all over the world would become closer to Samsung,” said Soojung Lee, the designer who directed this project.

“We wanted to create a familiarity with Samsung by letting young people become more accustomed to the brand and more importantly, have fun and experience the brand,” Lee continued. “We were looking for a platform where users get to directly experience things, rather than simply a space where we can promote our products. We’ve come to the conclusion that the metaverse platform called Roblox, which boasts the most global users, was the most appropriate.” 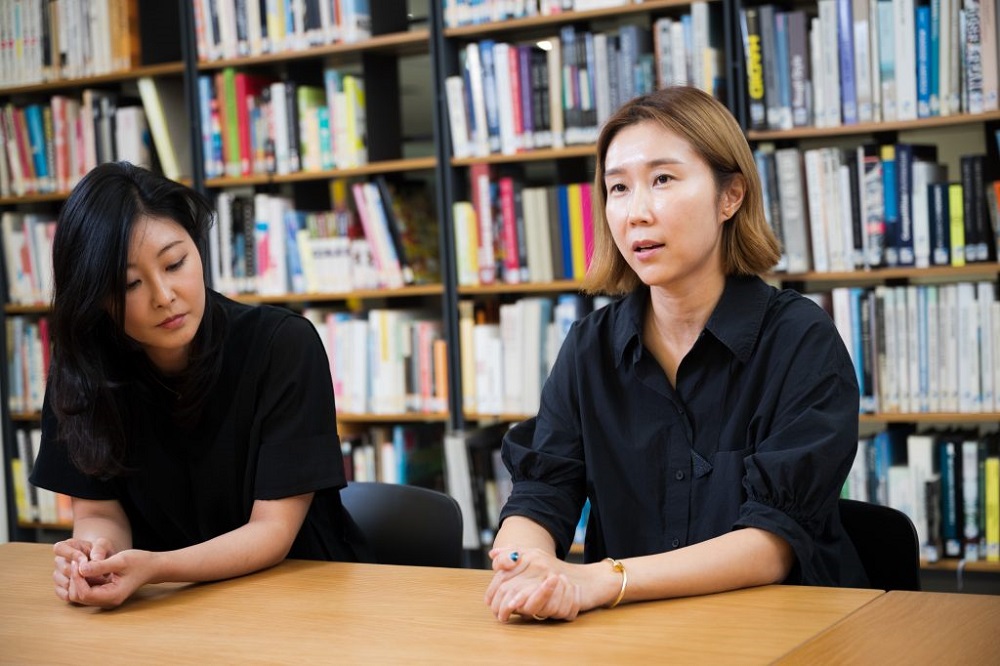 The reason Space Tycoon was made as a management simulation game is because the focus of the game is the user experience. “Rather than having a brand simply provide passive experiences, we wanted to provide a more active experience where consumers get to make the products themselves in the metaverse and go beyond experiences in reality. To accomplish that, this genre was the best for Space Tycoon,” explained Choi, who designed the UI and game scenarios.

Aside from simply building Samsung products in the game, these virtual, customizable products can be used for purposes that differ from their intended use, providing a unique brand experience to users. 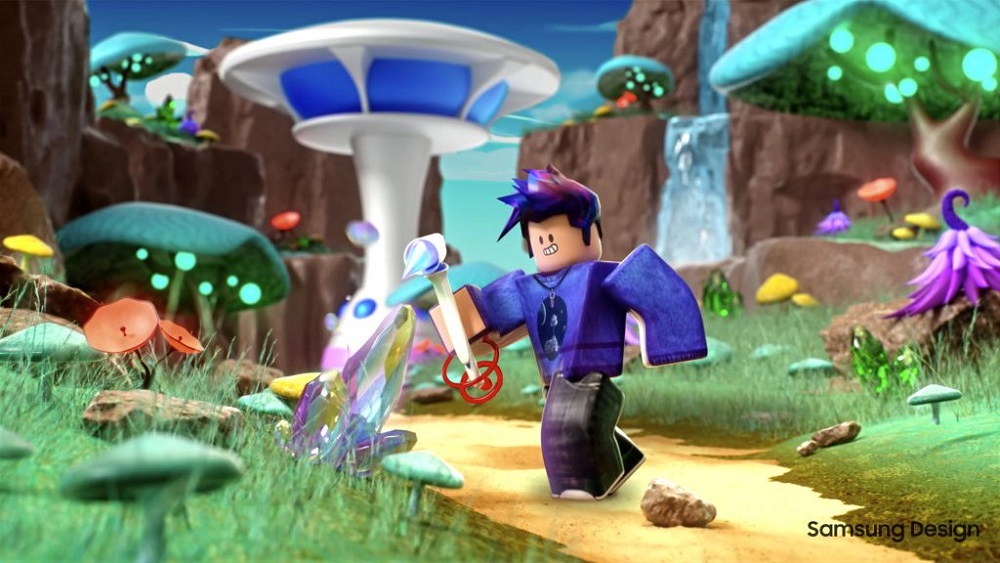 When explaining the background on how Samsung products are to be used in game, designer Shin emphasized the importance of providing a fun experience for younger users. “We prioritized Gen Z having fun while interacting with the Samsung brand and products by utilizing the features of the metaverse, rather than providing dull, technical information about product performance, such as battery capacity and camera resolution,” said Shin, who designed the visual interaction and visual concept graphical user interface (GUI) for Space Tycoon. 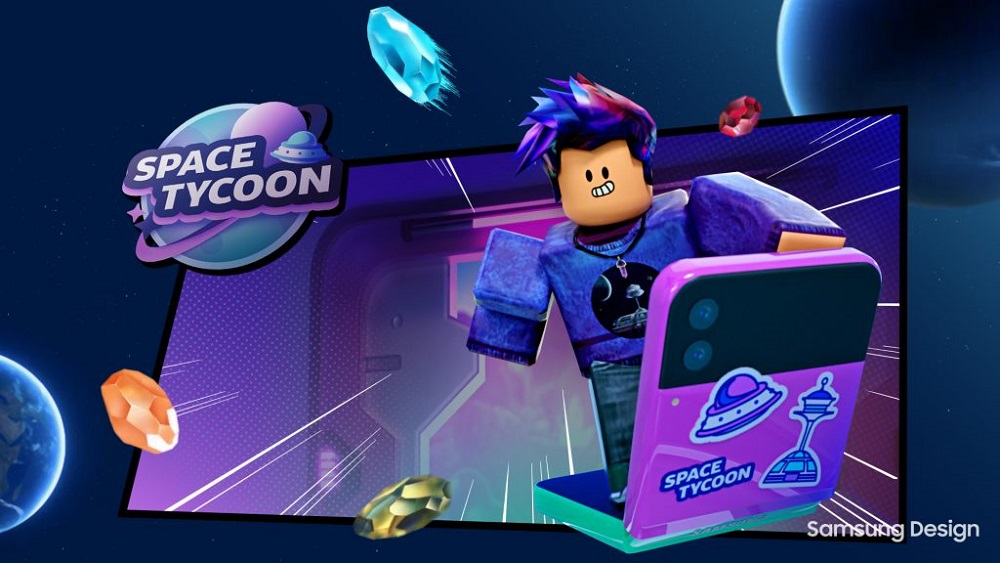 In Space Tycoon, Samsung’s foldable Galaxy Z Flip smartphone can be a scooter or a bag, The Sero TV becomes a single person helicopter and the Jet Bot robot vacuum cleaner becomes a hoverboard. “Using our imagination, we intentionally excluded the real-life special features of Samsung’s products and gave them new functions so that these products are used in completely different ways in the metaverse,” said Jaeik Lee. “We thought that this new, creative approach would help Gen Z think of Samsung as a friendly and innovative lifestyle brand, rather than simply viewing Samsung as a smartphone and home appliances company,” added Lee. 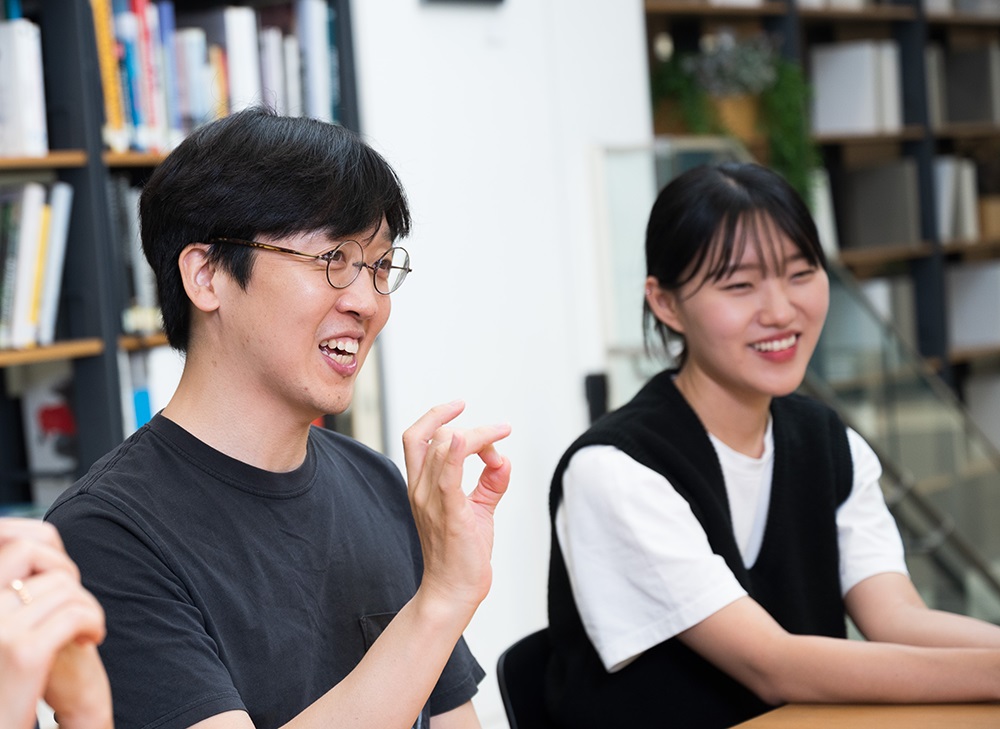 The environment of Space Tycoon is an advanced place in the bright future that is unique and abundant with resources, enabling aliens to research new products. Unlike the vast and silent image of space that is often thought of, the cheerful colors of Space Tycoon catch users’ attention. In order to craft an eye-catching environment in this virtual space, the designers needed to meticulously think through the details to create the concept of this new world. 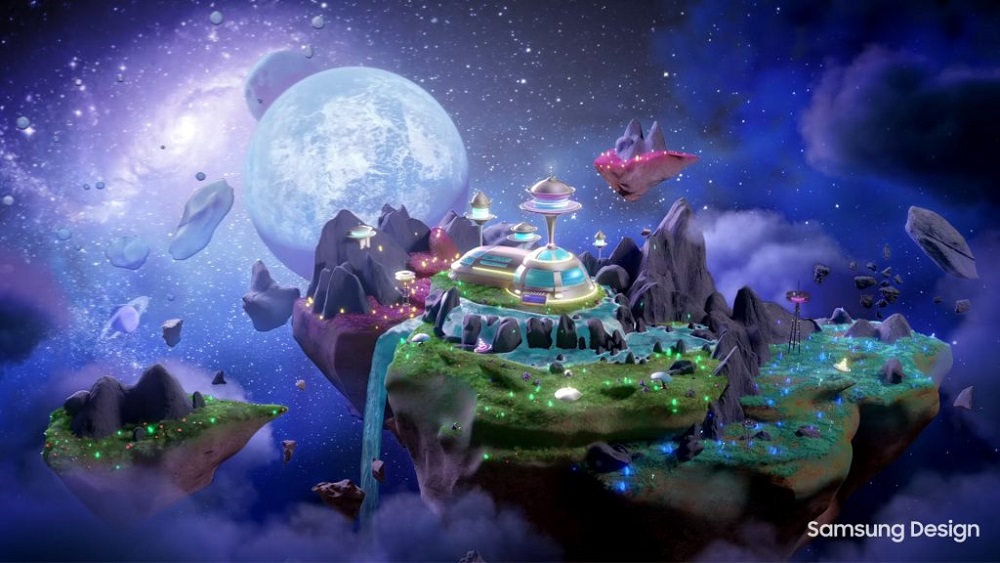 “Rather than using a dark, serious image of space, we wanted to create a mysterious place that is both bright and cheerful,” said Shin. “At the same time, we wanted to show a more advanced future when working on the design concept, so we referred to sci-fi pictures drawn by young kids. We were inspired by the concept of Atompunk as well, which showed how people in the 1960s envisioned the future. It’s a utopian place filled with big buildings, colorful spaceships, and it lives in harmony with beautiful nature. This concept is unrealistic yet full of elements that spark imagination.”

“The first goal was to make users feel that this is a different planet from Earth, and then we focused on designing a fantastical environment that catches users’ attention,” said Jaeik Lee. 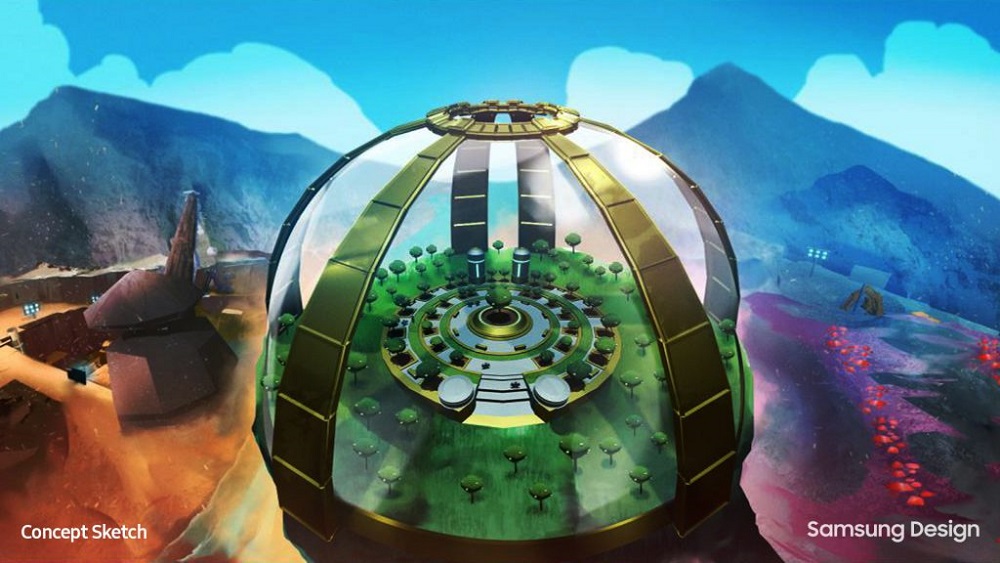 ▲ A bright and colorful world awaits you on Space Tycoon. 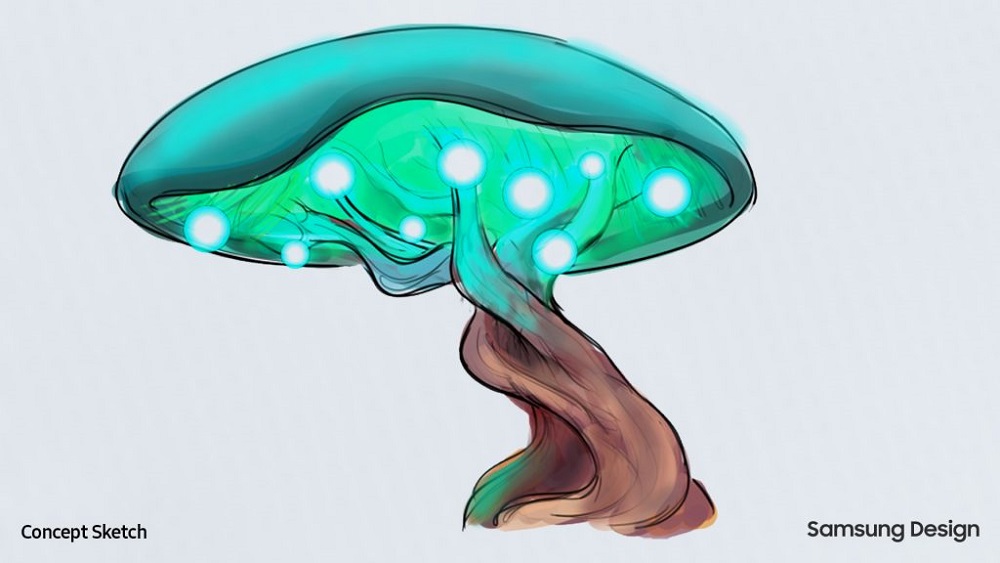 On Space Tycoon, the environment is filled with colors that are not naturally seen on Earth. Designer Jaeik Lee said he meticulously designed the virtual space and setting. “We kept familiar elements, such as ponds, plants and rocks, to let users know that these are indeed elements of nature, but we also tried to create an unfamiliar vibe as well by adding a touch of artificiality in texture and color,” said Lee. “For instance, we made the desert pink instead of a sandy color and made the forest more of a jade color. We also created metal cactuses as well as mushrooms and plants that emit neon lights.”

Within Space Tycoon, there are fun and unique elements as well. “When the aliens accidently landed on Earth, they fell in love with lemonade, so they took it with them on their way back home to space,” said Choi about the storyline of Space Tycoon. “You can find features that display the aliens’ love for lemonade within the world of Space Tycoon,” she added. Designer Jaeik Lee also offered a useful tip regarding the lemonade. “You can make Samsung products with the aliens,” said Lee. “Don’t forget to stop by the lemonade zone to win their hearts.”

Once Gen Z experiences Samsung in Space Tycoon, Samsung has future plans to continue connecting with users through the metaverse. 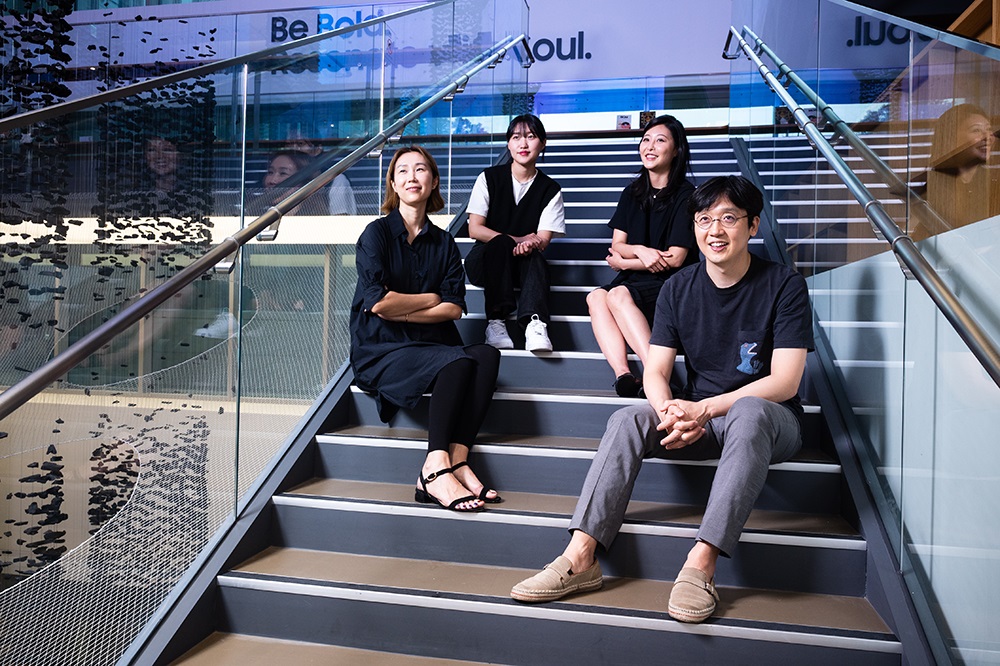 ▲ (From the left) Soojung Lee, Doeun Shin, Yeonee Choi and Jaeik Lee: the designers of Samsung’s Corporate Design Center who participated in the Space Tycoon Project

Shortly after the launch of Space Tycoon, many users flocked to the virtual space. “Just a few days after the launch of the service, the number of visits surpassed 5.9 million,” said Soojung Lee. “Roblox users on average play for about 5 minutes, but already there were heavy users that were on the game for more than 3 hours.” Designer Lee also explained Samsung’s plans to expand in-game content going forward. “Currently, about 20 Samsung products are available as in-game items, and these products are presented in various colors and designs,” said Lee. “We plan to continue expanding in-game content so that users can enjoy Space Tycoon for longer.”

“When we conducted a user survey during the course of development, one child from the U.S. commented that he experienced a new world through Space Tycoon,” said Choi. “It was very touching and exciting to hear that, and it made me feel a stronger sense of duty. Also, Space Tycoon is being advertised on a billboards in the Time Square in the U.S. and in Piccadilly Circus in the U.K., so we are proud that the design we’ve developed is out on the world’s stage. We’d like to continue making various content in Korea and collaborating to create pleasant experiences for users,” she added.

Space Tycoon is Samsung’s virtual reality universe that creates user-centered, new brand experiences by focusing on the preferences and lifestyles of future consumers. Through this universe, Samsung will continue to offer more innovative experiences that capture both the eyes and the hearts of users.