Fans of gaming and superheroes alike will be keen to get their hands on Samsung Electronics’ Galaxy S7 edge Injustice Edition, released to celebrate the third anniversary of popular mobile game Injustice: Gods Among Us. Samsung has developed the new edition of the device in collaboration with the game’s makers, Warner Bros. Interactive Entertainment and DC Entertainment.

The Galaxy S7 edge Injustice Edition comprises a package that includes a sleek, deep-black Galaxy S7 edge, accentuated by gold detailing and an iconic rear seal, inspired by Batman, one of the DC characters featured in the game. But what went into designing the Galaxy S7 edge Injustice Edition? Senior Designer Kwangmoon Kim, Senior Designer Junwon Lee and Assistant Designer Soohyun Kim in the Mobile business explained the ideas and concepts that went into the game-inspired design. 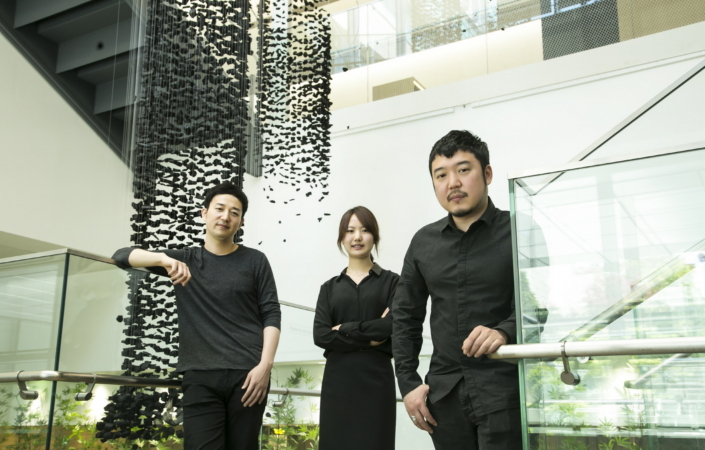 Q. What was the main concept and principle aim behind the Galaxy S7 edge Injustice Edition?

Junwon Lee: Our aim was to create a complete package that had a special meaning for Injustice: Gods Among Us game and Batman character fans. It includes a specially designed Galaxy S7 edge, a smartphone case and a Gear VR. The main color we used was black, and we also added a touch of gold.

Q. Why did you choose black and gold?

Junwon Lee: No matter if you are a fan or not, black and gold are the colors that most often come to mind when people think about Batman. The Batman character’s design has continued to change, but the black and gold themes used in Batman in 1990s’ still resonate with many people. We decided that these two colors best matched this edition, and our partner companies agreed.

Soohyun Kim: The logo – a black bat on yellow background – is very well-known. In the Batman movies and cartoons, the Bat-Signal, a yellow searchlight with a black bat emblem is projected onto the night sky as a means of calling Batman. Gold reminds people of the Bat-Signal and we believe the color can be attractive to both fans and non-fans alike.

Kwangmoon Kim: We thought about ways to add the gold-colored elements without altering the image of the new edition. As a result, the package presents a unique look as a whole, with each device piece imbued with a touch of gold. 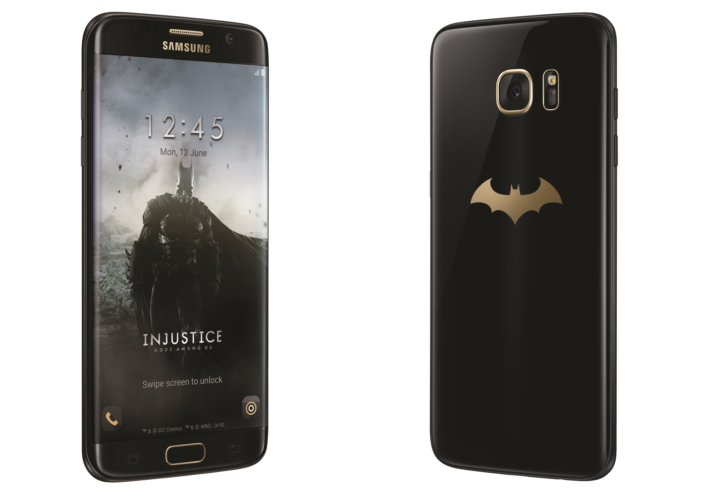 Q. What are the differences between the Galaxy S7 edge Injustice Edition and the S7 edge Black Onyx?

Junwon Lee: We wanted to find a unique black hue for the Injustice Edition. The handset mainly consists of two colors: black and gold. Black encompasses the whole body, including the metal frame, unlike the standard Black Onyx version of the S7 edge. This matt-finish black represents Batman’s suit. Gold, on the other hand, was applied on the logo, edge of the home button and rear camera to make them stand out. We examined a number of image samples for the Batman logo on the back, with consideration given to size and dimension, and, following discussions with our partner companies, eventually selected one.

Q. The special edition’s Gear VR and phone case are also unique. What were these items’ main design focus?

Junwon Lee: Our collaboration with the Injustice: Gods Among Us game also led to the creation of the special black version of the Gear VR with a matt finish. The phone case is a reinterpretation of Batman’s suit, and we made an effort to visualize this in a metaphorical sense, rather than make it too obvious. We chose a material that is both comfortable to grip and durable, but that also maximizes the matt texture. The case also needed to combine great looks and optimum protection. We had to make sure it did not compromise the simple beauty of the Galaxy S7 edge by adding too much detail.

Soohyun Kim: I had never really been interested in superheroes, so at first it was hard for me to understand a strong masculine character. However, I soon realized that Batman was not born with superpowers – he is an ordinary person who decided to make the effort to become a superhero. We wanted to showcase his wise and mysterious characteristics on the packaging. Batman uses a variety of gadgets to augment his powers, and we wanted the Injustice Edition package to match with this kind of equipment. 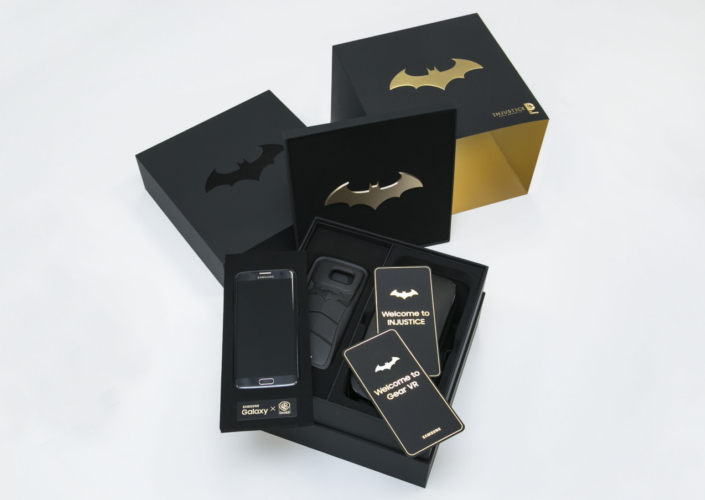 Q. What did you need to consider when you design a product based on a superhero?

Kwangmoon Kim: When we started this project, I was excited about designing the Galaxy S7 edge Injustice Edition as I enjoyed playing the Injustice game recently, especially with the Batman character in it. We came up with an impression of Batman – a matt-black and solid image – from his characteristics. To turn this idea into a product, though, we needed to bear in mind several considerations. Existing Galaxy S7 edge models had their own shape and a glossy look, and our partner companies have guidelines concerning the use of their superhero characters. We truly examined every elements from every kind of angle to blend them into special, but well balanced.

Junwon Lee: We focused on reflecting the character’s nature and meeting the needs of Batman and Injustice: Gods Among Us game fans. Fans might buy this package edition not just to use its devices, but also so as to own products dedicated to their favorite DC Comics hero. We examined and selected each component of the package from a fan’s perspective and also made proactive suggestions to our partners. The first thing you will see when you open the packaging is a Batman logo badge, which emphasizes the fact that this is a special edition. It is carefully crafted and designed in terms of its size, color and texture. We do not think of this package simply as a way to increase sales. We hope more people will come to appreciate the Samsung and Galaxy brand through our fresh approach and this special edition’s emotional appeal.

Q. Do you recall any stand-out episodes you experienced during the design development?

Kwangmoon Kim: In order to realize the black design for the Galaxy S7 Injustice Edition, we had to work hard and cooperate with other teams. For instance, we had to secure specific set of equipment from existing manufacturing facilities to produce the black metal frame for the special edition. We also had to make numerous attempts to adjust the color and texture to fit with the design. In order to create a totally black look, we even made the slit on the metal frame that provides better antenna performance in black.

Soohyun Kim: I was at a library one day when a book about the history of superhero stories caught my attention, even though I had never really been interested in the subject. I read the book attentively. A few days later, I ended up getting involved in this project – an amazing coincidence. During the production phase, I also learned a lot of things that as a designer I had previously not known about. At the production facility, I could see how important it is be precise and accurate when you are making a quality product. Even a small scratch on the box, a minute color difference or a tiny error in the size of the tray inside the packaging is unacceptable. I learned that great design quality comes from cooperation between different departments, not just from designers themselves. 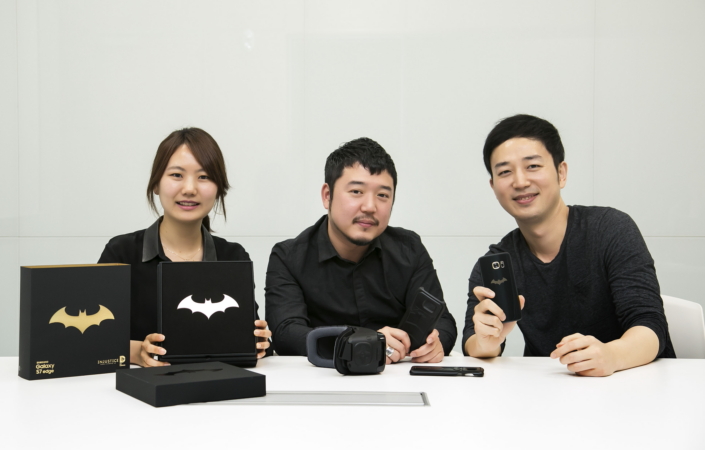