When you see all the latest mobile devices and TVs together in one place like at the Samsung booth at IFA 2014, it is extremely difficult to not think about how awesome it would be to play some games on these devices. However, you wouldn’t expect to see any gaming going on at a place like Samsung booth, right? Well, if you actually walk around the booth, you’ll notice that Samsung is much more into gaming than you think.

At IFA 2014, Samsung set up a booth to demonstrate S Console, its game service that enables users to play console-like games on their Galaxy devices using a game pad like Samsung Smartphone GamePad.

Don’t get us wrong. Playing games on your smartphone is definitely a lot of fun, but it still is difficult to beat the sense of control of a gaming console. Therefore, we at Samsung Tomorrow had to sit down and tried it out.

The greatest perk that comes with the S Console is that you can literally enjoy the console game experience anywhere – bus or subway – as long as you have a game pad paired with the smartphone.

Here we tried out a fighting game to see what it was like. As you know the sensation of pressing button is pretty important, especially when it comes to fighting game. Moreover, the game pad was compact and light, but big enough to give you that sense of grip.

There are actually more than 100 curated game pad compatible titles on S Console, and more games are expected to come.

Furthermore, it is compatible with other game pads, such as Moga Pro Power, SteelSeries Free, Amazon Fire Game Controller, and Nyko PlayPad Pro, which were introduced at IFA 2014. When you enjoy games with other game pads, you can play your game by controlling buttons in a similar way as you do with the Samsung Smartphone Gamepad.

However, as you might have guessed from the photo, you can also pair your smartphone to a Smart TV, so you can play your game on a bigger screen. This brings us to, Multi-screen Game. 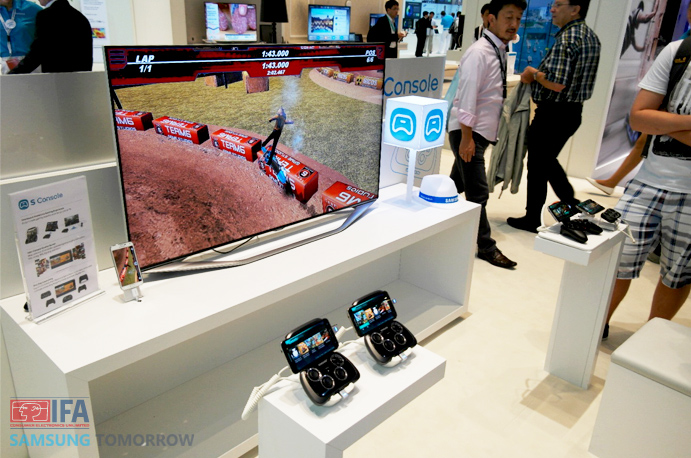 Now, Multi-screen Game is Samsung’s new game service that integrates TV and mobile. After you download a game from Samsung Apps on Samsung Smart TV and Galaxy smartphone, it automatically pairs the devices using Wi-Fi, and users can start playing with their family and friends. Up to six users can play games at the same time in the living room. 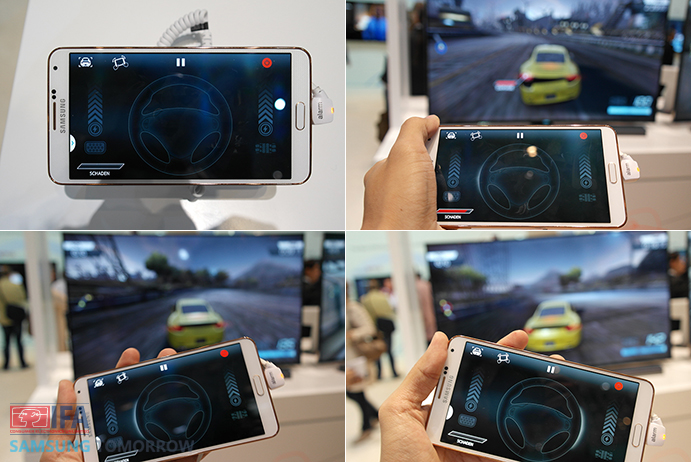 At the Samsung booth, the Multi-screen game is on full display. Here we were able to see that you can not only use a gaming console to play the game, you can also use your smartphone and or your Smart TV Remote control as a console! But there is more.

With the Smart TV, you can use your body as a gaming console as well, because the Smart TV can recognize your body movements. For example, the people at the booth have been inviting people over to experience a game of ‘Just Dance’. This dancing game recognizes your movement with the camera on the TV then rates your dance moves.

If you watch the faces of the people who are trying out the game, you can totally tell they are all about the experience. We actually wanted to try it out, but the people who played before us played so well, we didn’t want to get schooled.

If you are one of those people who like to play game, but was hesitant to get the latest gaming device or console, S Console or Multi-screen game is something you might want to consider. At IFA 2014, Samsung is showing that you can enjoy high quality gaming experience with the mobile device you already have. Instead of thinking about which gaming console you should get, you can start thinking about which game you want to play. It is game time.