Learning Curve: The Design Story Behind the SE790C Curved Monitor 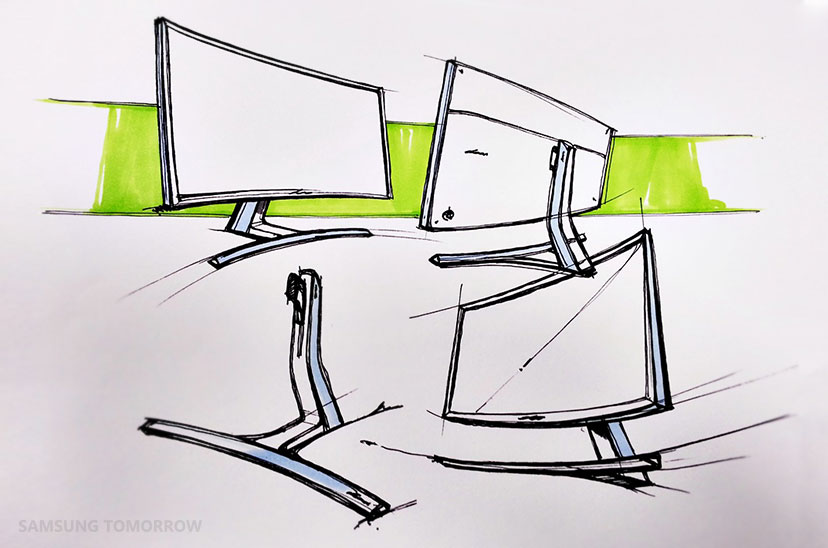 When Samsung engineers set about creating a new generation of computer monitors, they aimed to bring comfort to the daily lives of users. In the process, they built the “best monitor that is easy on the eyes,” also known as the SE790C curved monitor.

Over the last few decades, computer monitors have taken a few different shapes. First there was the Cathode ray tube monitor with a rounded screen. The next incarnation was the flat-screen monitor, which reduced the display distortion caused by the rounded screen of the previous type. After that, slim and lightweight LCD monitors were developed.

In the end, LED monitors succeeded LCD monitors. Although monitors bigger than 24 inches have gained in popularity, such models have one significant problem: the greater the distance between the center and the edges of the screen, the more fatigued viewers’ eyes will get.

To tackle such a drawback and bring more comfort to users, a group of developers devoted themselves to creating curved monitors. The development of curved monitors was inspired by the structure of the eye, and it gives users a comfortable viewing experience by reducing eye fatigue and display distortion.

Samsung Tomorrow met the team that worked on Samsung curved display monitors to learn more about how the SE790C curved monitor came to be. 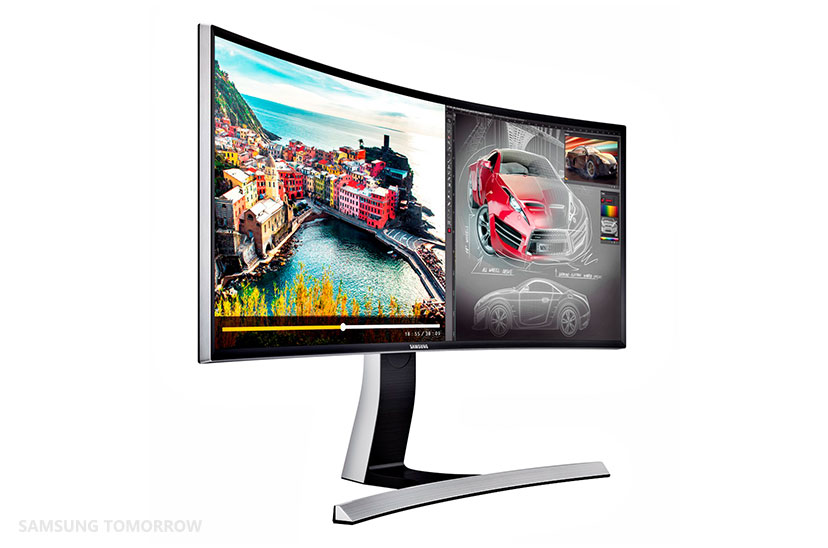 “Following the creation of design mock-up in 2012, we made the working mock-ups of the SD590C (27″), the first commercial model, and conducted evaluations with hundreds of people in the United States and Germany in 2013. The result was astonishing. It broke the record high among all concept evaluations for previous models with a remarkable score.” said Hyung-Gi Pak, Enterprise Business Team at Visual Display Business.

Accordingly, Samsung launched the world’s first curved monitor with a 27″ screen in 2014 and then announced a 34-inch model with 21:9 screen ratio in the same year. This year, Samsung added 23.6″, 27″, 29″ and 31.5” models into the curved monitor line-up, expanding the choice for consumers with a variety of screen sizes and monitor specifications.

“The SE790C model was recognized for its technologies and performance by a number of prestigious organizations as well as by winning a CES 2015 Innovation Award,” said Jun-Ho Song, Enterprise Business Team at Visual Display Business “By focusing on the fact that the monitor delivers the most comfortable image quality in accordance with user behavior, we have staged dynamic marketing and PR campaigns around the world. The current response has exceeded our expectations.” 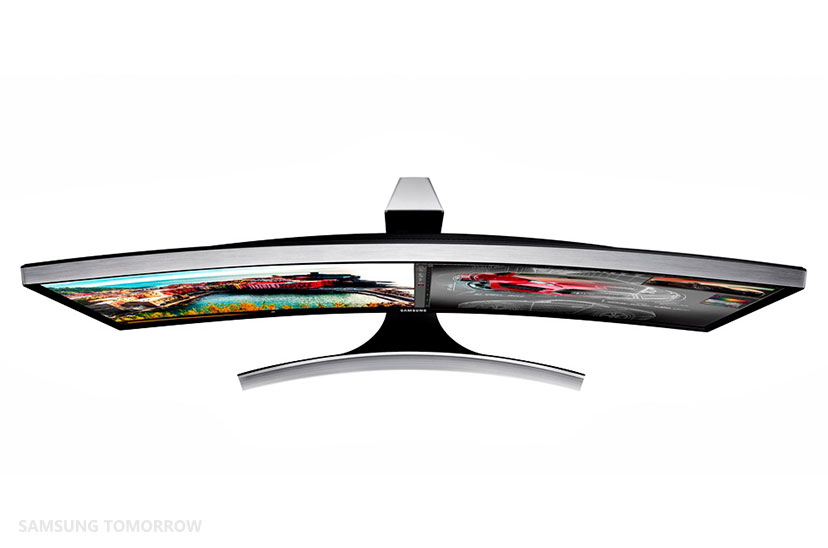 When the SE790C debuted on the global stage, its major features showed how important the image quality is for a monitor. In addition, the model provides as many additional functions as possible in a bid to raise work efficiency by adopting an ergonomic mechanic mechanism. Specifically, the monitor has a high-resolution ultra WQHD (3440*1440). Its color range covers 100% of sRGB, and it has a 3000:1 static contrast ratio and wide viewing angle. Most of all, with Flicker Free technology, it realizes a quality display that is comfortable for the eyes.

The monitor is equipped with various additional features befitting its premium quality. With differentiated technologies developed by Samsung, such as PBP and PIP 2.0, the monitor can show pictures from two different input sources on its wide screen. The monitor also boasts USB 3.0, USB Super Charging, and 7-Watt, 2-channel speakers.

As for connectivity, the monitor supports a display port to provide high resolution; two HDMI ports to connect various AV devices, such as game consoles and STB; and four USB 3.0 ports. These ensure that users can connect and use peripheral devices conveniently.

With these strengths, the monitor has been well received by users who have used other curved monitors, many of whom say that it stands out from the rest.

“Before we launched the product, we offered an opportunity for some of our employees and professional gamers to experience using it,” said Sungkyu Lee, Enterprise Business Team at Visual Display Business. “At the time, many of them thought that all monitors are the same, but such perceptions were changed when they experienced the SE790C firsthand. Some professional gamers said that it was a must-have monitor because they spend a lot of time in front of a monitor. A lot of them asked if they could keep them a little longer.” 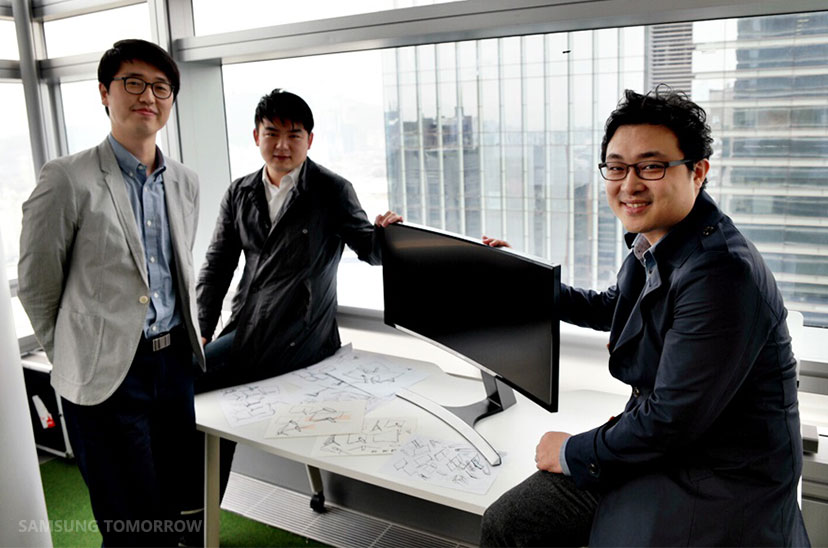 A Sleek Aesthetic in Front and Back

The design team also considered the fact that people watch and use monitors from a much closer distance than they do with TVs. As such, ease of use and appearance were also key considerations.

Samsung applied the concept of an edge bezel to the monitor design to help the curved screen keep users’ eyes comfortable. The simple design allows users to concentrate on the content being shown. As the open office concept has become more common, the design of the back of the monitor was also an area of key importance. 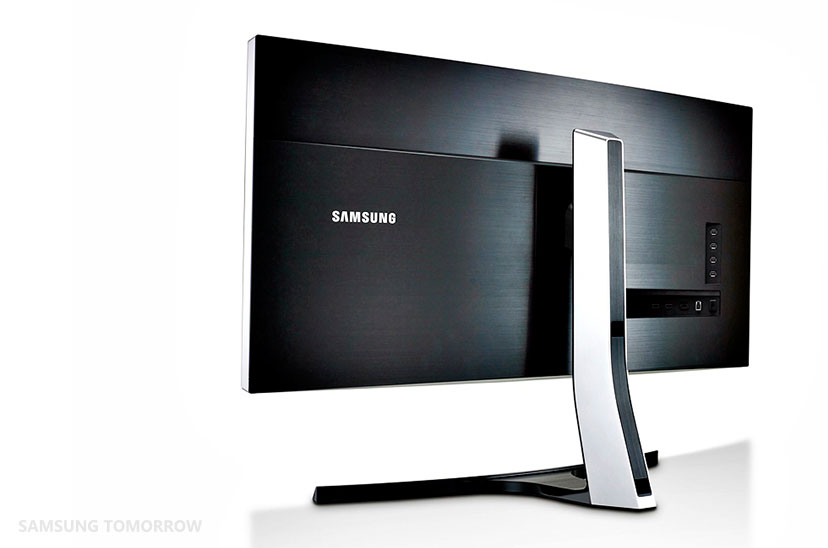 “When the design process of the curved monitor started, I asked myself what could make the curved shape noticeable,” said TY Won, Principal Designer of Design Team at Visual Display Business. “I tried to make the curved lines prominent by applying a metal material to its side to complete its shape. This design emphasized the curves by using linear elements in the stand base. So far, we have been putting in a great amount of effort to create the unique identity of Samsung monitor design. The product is also in line with this identity. Using the edge bezel, we wanted to have users immersed in the monitor to the maximum degree. At the same time, I intended to create a curved stand bar to express it as a sharp and compact product.”

People use monitors in various positions, unlike TVs, which stand in a single position. For this reason, Samsung created an ergonomic design that enables users to control the height and the angle of the monitor. For users who use a monitor arm, we even equipped the monitor with a VESA wall mount. 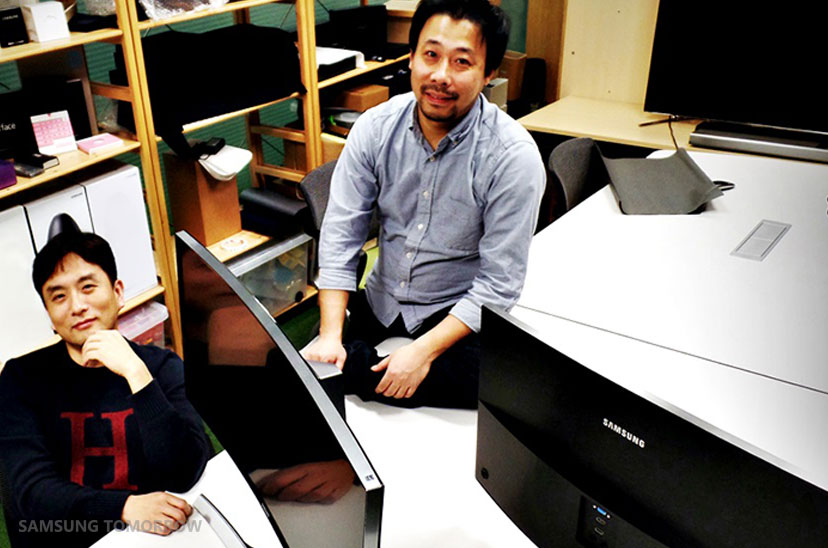 “As we wanted to develop and create a perfect product, we had to have a lot of discussions and make a lot of decisions,” said Yongjoo Lee, Senior Designer of Design Team at Visual Display Business. “I think that all this effort felt worthwhile on the debut of the SE790C. I hope that our monitors will take root firmly in the market whilst having a beneficial effect on others, because our monitors are at the center of change.”

It is expected that curved monitors will become mainstream soon. The launch of Samsung’s line of curved monitors is significant because they are armed with advanced technologies. These monitors are ushering in a new era with the unique identity of the company.