*This article has been updated.

If you are here because you missed Samsung’s press conference at IFA 2014, you came to the right place. Samsung Tomorrow was at the scene taking legible notes (and photos) during the press conference in Berlin to bring you the essentials as quickly as possible. Here are the main topics, newly announced products and some notable details from the Samsung Press Conference at IFA 2014.
[new_royalslider id=128]
Topic: Ultra-High Definition
Samsung had predicted the television market would go Ultra-high definition, Smart, and Connected. Now, Samsung is the market leader with a share of more than 60%. Samsung has also established Curved TV as a new television category and expects to go mainstream, mainly because of the superior TV experience. Samsung expects its ‘curved’ and ‘UHD’ to extend its market leadership.
During the past few months, Samsung tripled its line-up of Curved Televisions – not least in the European market. And today, about half of the UHD TVs Samsung sells in Europe are Curved UHD TVs.
Product Announcements: 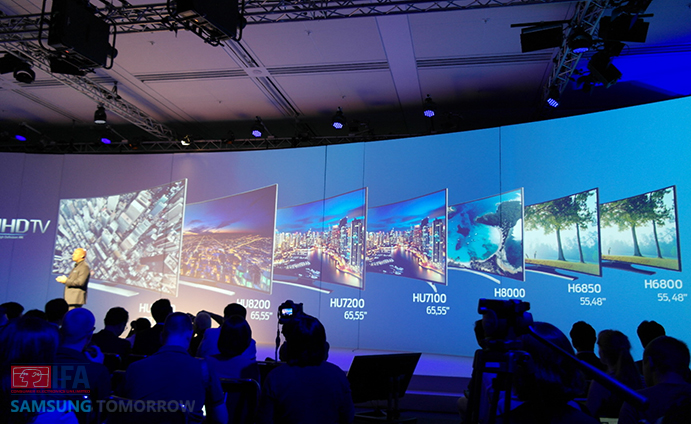 1. Samsung 105-inch Curved UHD TV
– Samsung announced the world’s largest Curved Television the Samsung 105” S9W, the latest addition to its line-up of Curved UHD TVs, which is now available across Europe and the world.
– The Samsung 105-inch Curved UHD TV boasts a 5120 by 2160 screen resolution, and a total of 11 million pixels, delivering five times the resolution of Full HD.
– The S9W comes with the Quad Core Smart TV platform, which has voice and gesture control, our Multi screen experience, and more. 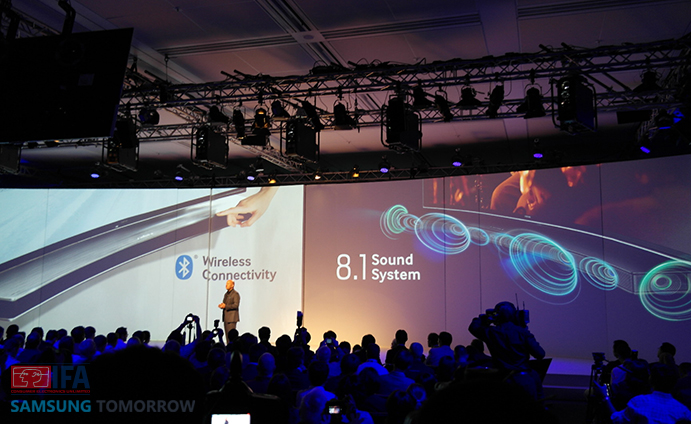 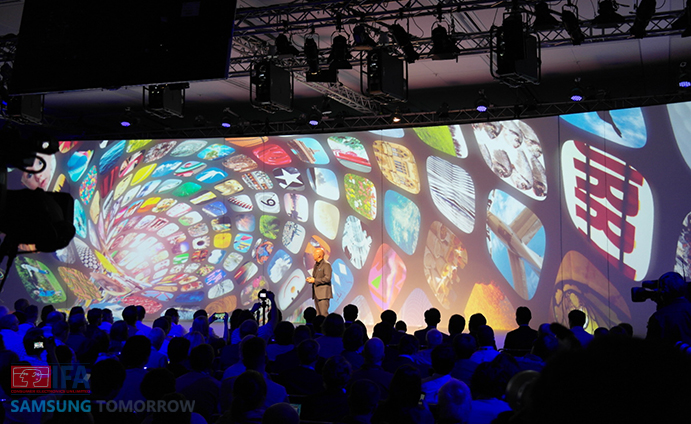 * Bendable TV is the biggest leap yet in TV technology. At the touch of a button it can transform from flat-panel UHD TV into a Curved UHD TV, or vice versa.
* At one point of the presentation, Dr. Oshin Vartanian said that scientists have found an area of the brain that’s activated when people view rounded objects and people find curved objects more beautiful and pleasant to look at than those with sharp angles.
* There were many special appearances, such as Christian Ferreol, Ernst Schmid, Michael Bay, and Mario Gotze, to highlight some of the advance features of the Curved TV.
* Miguel Chevalier said Curved TV can bring artistic quality and beauty and it inspired him to install a digital art piece at IFA 2014 called “Origin of the Curve.”
* Samsung also announced its plans to further expand its UHD ecosystem by working with global content partners, such as Netflix, maxdome, Wuaki.tv, and CHILI, to help accelerate consumer adoption and access to UHD content.
* 500 gigabyte Samsung UHD Video pack will give consumers easy access to some outstanding UHD content, and movies from Fox are of course part of the package and will help jumpstart the ecosystem.
* Samsung said the real reason UHD is about to take off is streaming content and secure downloads and as emphasized that UHD streaming is powered by Samsung Smart TVs.
* For better UHD service, Digital Europe is launching the Ultra HD logo to certify manufacturers, which actually delivers deliver images that are indeed four times richer than traditional Full HD televisions.
Topic: Samsung Wireless Audio Multi-room Speakers
In Europe, the home entertainment market will nearly double this year, according to Futuresource. Samsung Multiroom is considered the most integrated system and the speakers can connect wirelessly with all 2014 Smart TVs.
Product Announcement: 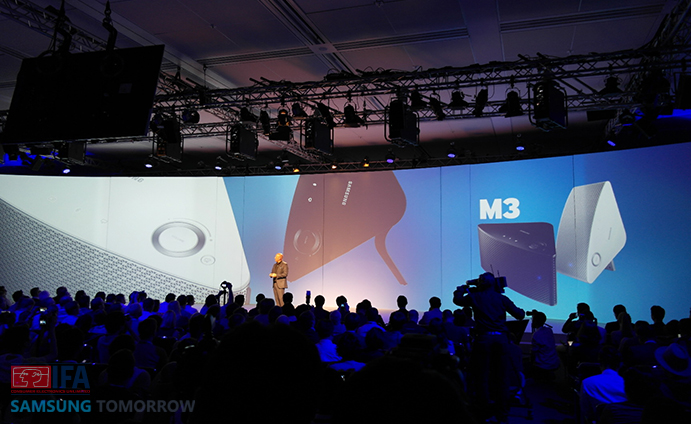 3. M3 Multi-room speaker
– Samsung announced M3, a more compacted version of the M5 and M7, which earned a prestigious EISA Award for Best European Multi-room System.
– It is a highly affordable model, which offers two-way speaker functionality and is controllable via one smart device, or whatever the source of your music. 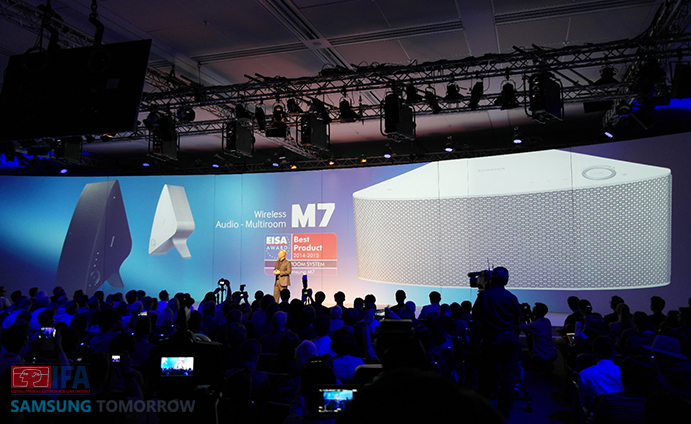 Notable Details…
* Samsung is partnering up with Spotify to provide a better multiroom audio experience in the home. For the first time, Spotify stream is no longer limited to just one speaker, as users of Spotify Connect can now play music on two Samsung Wireless Audio Multiroom units at once.
Topic: Digital Appliances
During the first half of 2014, Samsung grew its home appliance business in Europe by 31% compared to the same period last year. Focusing on design and technology, especially at the premium end, Samsung has won awards from major consumer magazines in 8 European countries. Last year, Samsung launched the Club des Chefs, which eventually led to Chef Collection.
Product Announcement: 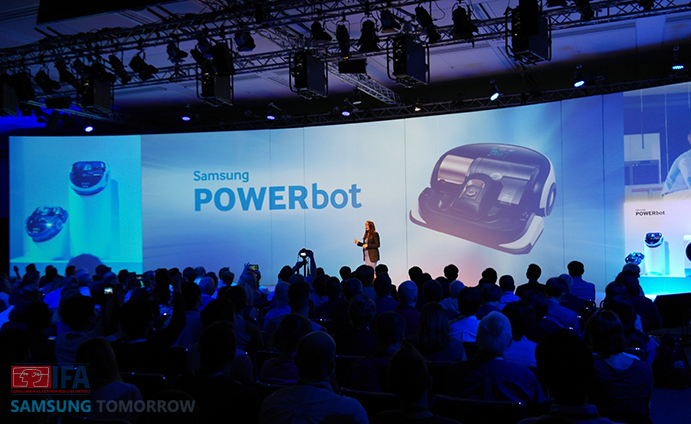 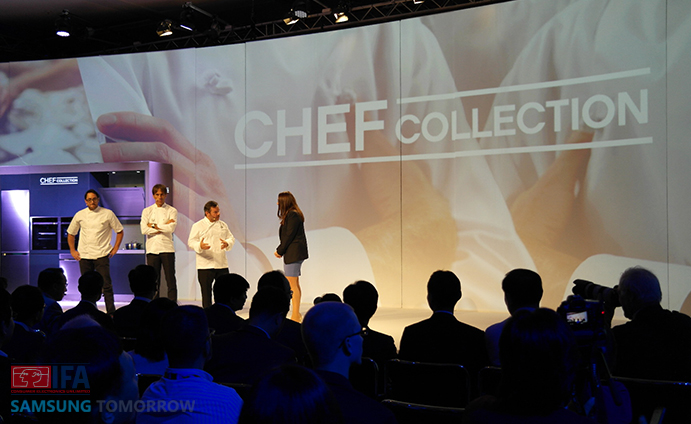 * Chef Collection features the ‘Chef Zone’, a special storage area that keeps meat or fish at exactly Minus 1 Celsius. This allows temperature fluctuations to be minimized for ideal freshness. It consists of 370 liters of space, which is the world’s largest capacity for this category.
* Chef Collection Cooktop features Virtual Safety Flame for induction cooktops. These embedded LED lights visualize heat, which helps you to set the right intensity. It prevents overcooking and food being burnt.
* Chef Collection OVEN features Vapor Technology, which injects super-heated vapor air. The vapor controls temperature more precisely and keeps the food perfectly tender and moist, while achieving the right taste and texture.
* Chef Collection DISHWASHER features a WaterWall technology, which reaches every corner – unlike conventional dishwashers.
* WW9000, Samsung’s newest washing machine, features a Crystal blue door, which stands out in any home. The door of the WW9000 is much larger, by a noticeable 16% and we’ve placed the tub substantially higher, which measured out to take 30% less effort in loading and emptying the machine.
Topic: B2B
In today’s world, it’s not so much about achieving a work-life balance, but a good work-life blend, which Samsung calls the Second Phase of the Consumerization of IT. Samsung recognizes that technology choices directly impact many enterprises’ business model and they want to bring greater productivity at a reduced cost. Samsung strongly believes that it is a natural leader in B2B.
There are six key areas within which Samsung is focused for B2B: Hospitality, Retail and Education, Healthcare, Finance, and Logistics and Transportation. Samsung’s vertical solution for each area is full-service, integrated, and scalable.
Product Announcement: 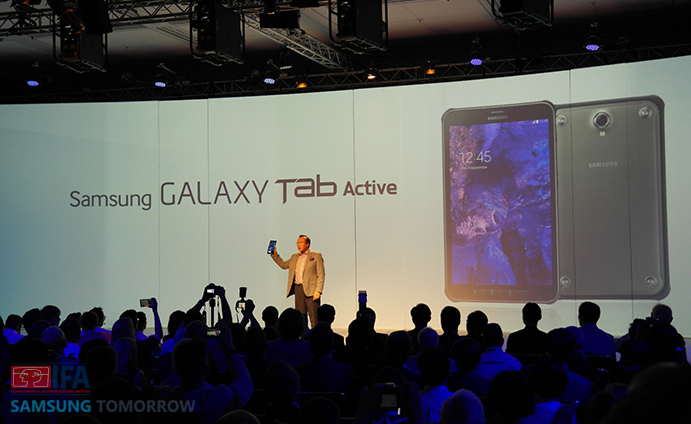 5. Galaxy Tab Active
– Samsung has developed the Galaxy Tab Active, the world’s thinnest, lightest, and most rugged tablet.
– It combines anti-shock features with water and dust resistance, and is equipped with a detachable battery, allowing non-stop business operation up to 10 hours.
– Its integrated C-Pen let’s people use the tablet even if they’re wearing protective gloves. It also has hot keys. With one press, workers can launch any application, whether it’s a panel for customer signatures, or a point-of-sales application.
– The Tab Active has in-built NFC and an AF Camera for barcode scanning, and KNOX for enhanced security.
– Samsung worked with several Fortune 500 companies like DHL, Pepsico and SAP to specifically design the Galaxy Tab 4 Active for enterprise customers.
Notable Details… 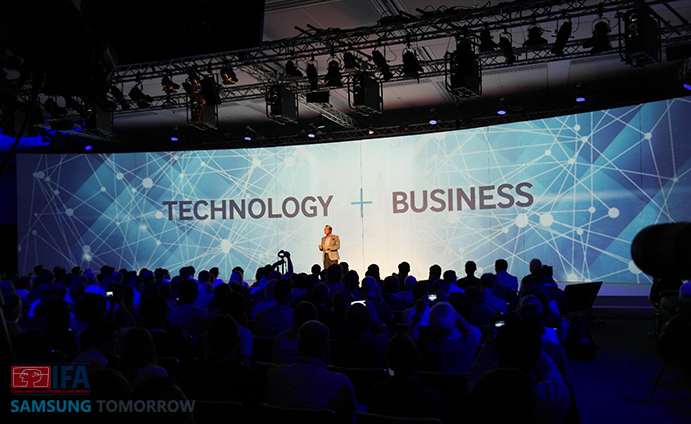 *Samsung has established various B2B partnerships and has been providing solutions to businesses, such as Nike, Deutsche Bahn, the world’s second largest railway, Pantheon-Assas University in France, UK’s Northwick Park hospital and more.
* Samsung also focuses its printing solutions for B2B to make enterprise technology more intuitive and productive, which is why Samsung’s latest multi-function printers have various key features specifically for enterprise mobility.
*As Samsung have led the way with its NFC-powered Mobile Printing app, Samsung printers are now truly stand-alone devices, thanks to the SMART UX Center; a touchscreen interface built on Android.
You will be able to search the Web without being connected to a PC; you can print images and documents stored anywhere online with ease.
* Samsung is driving an industry revolution with Digital Signage. Samsung expects the market to grow nearly two-fold to over $7 billion – by 2018. Two years ago, Samsung launched the Samsung Smart Signage Platform. It made digital signage both affordable and intuitive to use. Companies everywhere deploy digital signage:  in transportation and fast-food restaurants, in hotels and cinemas and in many other places.
* SSSP is an elegant, open-platform solution that integrates a media player with a large-format display, powered by a system-on-a-chip that reduces cost, and makes it easy to install and manage.
Samsung’s second generation SSSP has double the processor power, and is even easier to use, thanks  to built-in Wi-Fi, and expandable memory. Content can be uploaded, scheduled and managed – easily, instantly, and even remotely.
Through SSSP, businesses can see a total cost savings of around 24 to 31%over three years – compared to conventional digital signage.