Look At Me: How to and Review

Previously, we’ve went over how the “Look At Me” app came to be and its possibilities. Now it is time to check out the details. 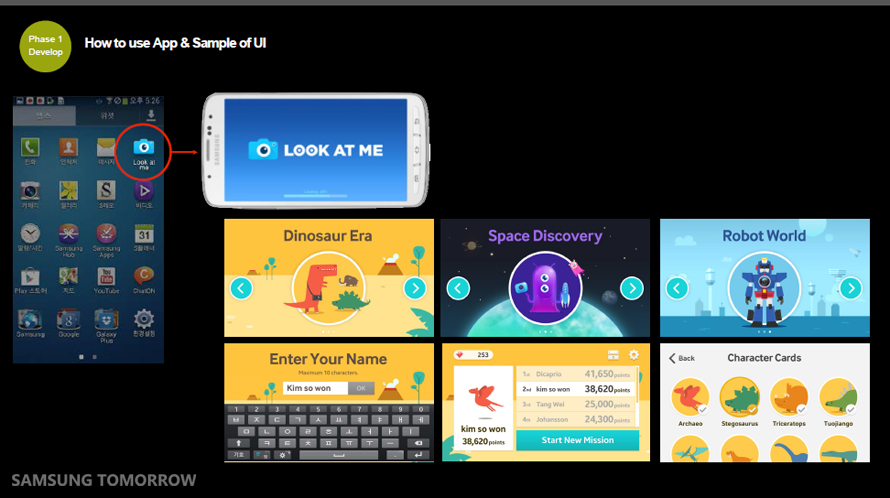 As mentioned before, the app consists of seven missions. Here are more tips and details of each mission.

Once this mission starts, a white facial contour will appear and ask the child to take a photo of his/her own face or another person’s face (i.e. parents’ face) within the contour. After aligning the face correctly, the child can take the photo and submit it. If it is difficult to take a selfie of the other person, the child can use a saved photo.

As soon as the child looks at either ‘selfie’ of the displayed photo on the next screen for 3 seconds, small photos of a face will appear near the eye area. On the next screen, the child will be required to identify which photo they just saw near the eye area. There are 18 levels and a larger selection of faces will be displayed as the level progresses.

Through this mission, the child will be able to pay attention to the area around the eyes, enabling him/her to make eye contact with the person he or she is talking to.

*Tip- The child should be aware that small photos will appear after 3 seconds and should focus on the original photo.

In this mission, the child must first focus on the plus sign in the center of the screen. Then, two groups of nine different faces are given on the left and right sides of the screen for a short period. Some of the faces in each group display a given emotion and some do not.

Then, the child is asked to decide which group has more faces expressing a specific emotion such as happiness, sadness, anger, fear, disgust, and surprise. There are 10 levels, and each question is worth 40 points to make up a total of 400 points. The facial expressions become more diverse as the level progresses.

As the child completes this mission, he/she will be able to actually read the mood of many people and eventually assimilate with the crowd, to reduce the feeling and impression of being an outsider.

*Tip- Make sure the child looks at the ‘plus’ sign as otherwise the mission cannot be completed accurately.

This is the first mission the child will complete. In this mission, he/she will line up 4 facial expression changes, in sequence.

There are 4 stages: two stages require him/her to take photos of his/her face 4 times in a row for two seconds, starting with a blank expression and then gradually forming the “Expression of the Day,” and line them up in order taken; the other two stages involve arranging saved photos and placing them in order.

Through this mission, the child will be trained to recognize minimal changes in facial expressions and express his/her feelings. Understanding his/her expressions will allow the user to feel others’ moods and expressions in the end.

*Tip- The child must take a photo of the face only, not including other features.

This mission requires the user to take photos of another person, (i.e. the parent).

Once the mission starts, white contour lines of the facial features will appear on the screen. Within the lines, the child will place his /her parent’s face, and when aligned correctly, the lines will turn red, and a picture will be taken.

Two seconds later, a new white contour will show up but in a different place. The child would have to realign his/her face within the shifted contour lines again. This mission has five stages, and as the level progresses, the contour lines may be replaced by only the facial features. Each stage the child can earn 80 points, leading to 400 points in the end

By accomplishing this mission, the child will learn the relative positions of his/her eyes, nose, mouth, and ears, and pay special attention to the area around the eyes. As a result, the child will be able to look at his/her parents’ faces directly, increasing the bond between the parent and the child.

*Tip: Keep the camera still for two seconds when the contour lines turns red as the photo will not be taken even if there is a slight movement.

In this mission, a particular situation is given in a picture and the user is required to make the appropriate facial expression for that given situation. For instance, if the picture shows a child saying, “I’m on my favorite ride,” then the user would have to smile. Once the user aligns his/her face within the blank face section, he/she should take a photo of him/herself. This mission is also worth 400 points.

By completing this mission, the child will be able to make the right expressions in the right situations, breaking down communication barriers with others.

*Tip: Ignore the sample facial expression when it appears as it is only used as a reference.

In this mission, the user will be asked to imitate the poses in the picture and take photos of both him/herself and parents. Then he/she will compare the photos and decide who imitated the pose most similar to the given pose.

Through this mission, the child will learn how to copy other people’s actions, cultivating sociability and adapting to the group in the long run.

*Tip: Make sure to stand 3 meters away to ensure that the whole body appears in the photo.

This is the last mission where an expression or pose is posted on the screen, and the child and parent have to copy it and take a photo together. This mission is optional so it doesn’t influence the results of other missions.

Review of the Look at Me app

During the development of the Look At Me app, a clinical test was conducted with a group of 9 children for 8 weeks. The children took various tests, including an eye-tracking test. Jonghyun Kim, 11, was one of the children who participated. We recently met with his mother and asked about the effect of using the app and the change in the relationship between her son and herself. 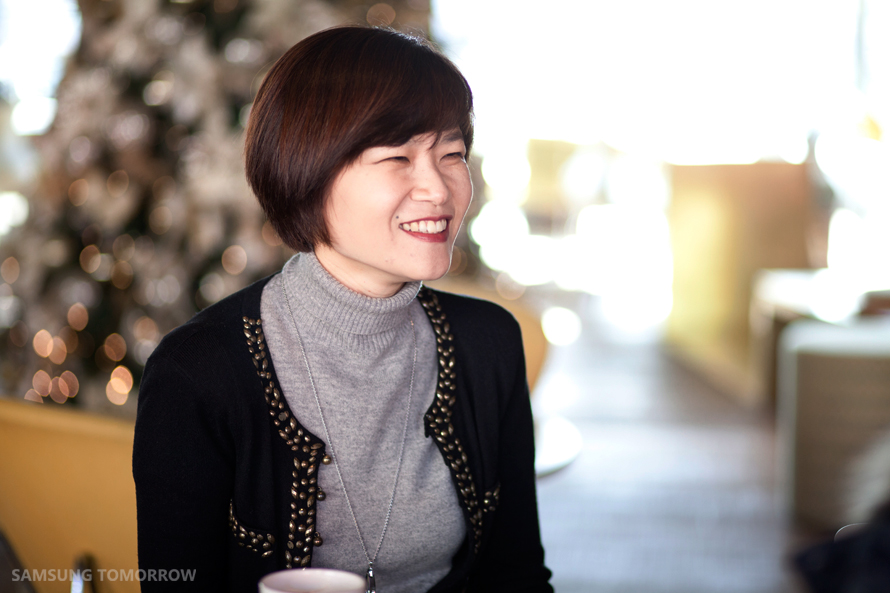 Samsung Tomorrow (ST): Before Jonghyun participated in the program, what was he like?

Mother: Jonghyun had his own world. He didn’t really pay any attention to his surroundings. Also, he didn’t express his feelings that well. Most of the time, he was quite gloomy. Although he and I talked sometimes, it wasn’t really a dialogue. It was merely me asking questions and him giving short answers.

ST: Did Jonghyun change during the program?

Mother: Yes, he did. He started to pay attention to others. Once I was talking to his aunt and asking about the well-being of his cousins on the phone. Jonghyun suddenly came to me and asked, “So is my cousin doing well at school?” I was so surprised when he said that because it was actually the first time he asked about another person. Also, he has become much brighter than before. He began to make jokes and ask more than one question at a time. It seemed to me that my son enjoyed spending time with me. I believe we have become much closer than before.

ST: Would you recommend this app to parents who have children with autism?

Mother: Yes, I would. In fact, I am already promoting this app to my acquaintances. They said they would use it immediately and help their children make eye contact with them and improve their communication skills.

** All functionality, features, specifications and other product information provided in this document including, but not limited to, the benefits, design, pricing, components, performance, availability, and capabilities of the product are subject to change without notice or obligation.