Whenever new mobile products are introduced, like the new Galaxy TabPRO and Galaxy NotePRO at CES 2014, we assume they’ll be stronger, more efficient and equipped with better displays. To some extent, we take these improved results for granted. To be honest, we know it’s not so typical for many people to analyze the elements that make a gadget better than before, such as the technologies behind the application processor of Samsung’s new tablets. or smartphones or smart cameras or… well, mobile devices in general.

However, if you are one of those people who feel compelled to find out, keep calm and read on. We stopped by at the Samsung LSI exhibition for CES 2014 to bring you an easy guide to one of Samsung’s many exclusive technologies, the Exynos 5 Octa Processor. 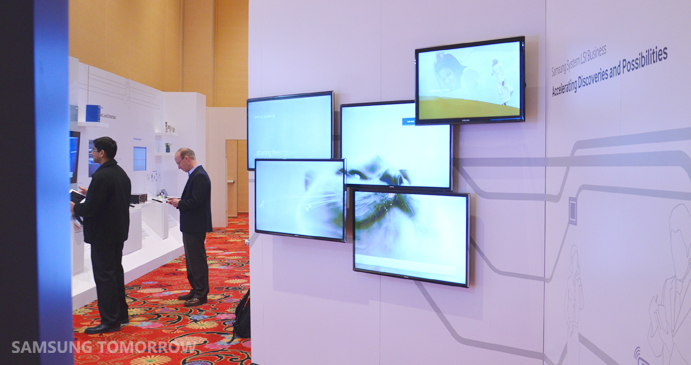 Basically a processor is the piece that is responsible for executing the task you desire to perform on your device. Exynos 5 Octa is an application processor that features eight CPU cores: 4 big cores called Cortex™-A15 and 4 little cores called Cortex™-A7. This Exynos 5 Octa processor with 8 cores takes care of tasks such as web browsing, social messaging, mobile gaming and more based on the computational intensity of a given task.

Why it is More Powerful and Efficient (big.LITTLE™ Technology and HMP)

The word ‘Octa’ in the Exynos 5 Octa processor represents its 8 cores. There are four big (Cortex™-A15) cores for heavy tasks, such as graphic oriented mobile gaming or HD movie playback. The four little (Cortex™-A7) cores are for light tasks, such as web browsing or social messaging. Having two different kinds of cores, performance oriented cores and power efficiency oriented cores, is the processing technology called the ‘big.LITTLE™ Technology.’

However, big.LITTLE™ technology has been implemented by some other companies too. What differentiates the Exynos 5 Octa processor is its Heterogeneous Multi-Processing (HMP) capability. HMP is the most powerful used model for ARM®   big.LITTLE™ technology, as it enables the use of all physical cores at the same time by assigning tasks to appropriate cores according to the their characteristics.

For a better understanding of this technology, let’s compare the conventional big.LITTLE™, or the ‘Cluster Migration’ solution, to Exynos 5 Octa’s ‘Heterogeneous Multi Processing’ big.LTTLE™ technology. Let’s just say the group of 4 big cores is called the big cluster and group of 4 little cores is called the little cluster. Conventional big.LITTLE™ architecture would assign all tasks to one cluster even if the power and performance requirement of all tasks is not the same, which results in the limitation in the flexibility, power consumption and performance efficiency of the device.

HMP takes this ‘limitation’ out of the conventional big.LITTLE™ architecture. Because HMP uses all 8 cores at the same time, the processor is able to assess the individual tasks’ characteristics, and assign each task to the right core. Therefore all of the cores are able to work independently instead of the whole cluster being activated at a time, which maximizes performance.

For a tablet to have awesome performance, it needs a high performance CPU, which we just talked about, and high memory bandwidth for fast processing and low power consumption for long battery life. Samsung’s answer to that is its exclusive Widcon technology of Exynos 5 Octa.

Widcon technology’s widest memory bandwidth and lower power consumption are harder to explain because this actually has to do with the configuration/structure of the Exynos 5 Octa itself. Here is a very simplified explanation.

For conventional AP solution, data between the DRAM and mobile processor must travel through wires between each other. Widcon Technology redesigned this process so that the data can travel directly, thus efficiently, to where it needs go; instead of having to go around and through the circuit board. As you can see on the image above, Samsung’s innovative TSV (Through Silicon Via) technology (indicated between the DRAM and mobile processor) is the key to this technology. This results in an increased memory bandwidth of up to 17 GB/s – a 2.1 GB/s gain over previous systems.

Consequently, the higher bandwidth allows the application processor to perform at maximum levels with low clock speed, resulting in up to 20 percent lower power consumption (in comparison to Exynos 5 Octa(5420) with LPDDR3 12.8GB/s memory bandwidth.)

With the release of the 12.2” inch Galaxy NotePRO and Galaxy TabPRO, we have seen that people are interested in portable large size tablets. Naturally, they want great quality display on their big screen.

What also makes Exynos 5 Octa special is its general purpose graphics processing unit, GPGPU. Essentially, GPU is the unit that facilitates the process of memory becoming an image. Therefore, traditionally, GPU mainly computes graphics; even though it could be more effective than the CPU when processing certain type of data. However, Exynos 5 Octa’s GPGPU, also known as GPU compute technology, can boost the performance of the main processor (CPU) for certain applications where the GPU’s ability can be more effective.

ARM®  experts who developed the GPGPU of the Exynos 5 Octa said, “The result is improved performance and energy-efficiency and a more efficient use of the system as a whole, making computational photography, computer vision, advanced imaging, point-of-interest extraction and augmented reality possible because of the extended processing capacity.”

Therefore, the GPGPU can handle workload more efficiently, which results in increase of performance and energy efficiency of the Exynos 5 Octa, especially when it comes to graphics. For example, in comparison its previous version, Exynos 5 Octa’s GPU is 2.3 times faster in 3D graphic processing.

So there you have it – big.LITTLE HMP, Widcon and GPGPU – the behind the scenes look at some of the technology that makes your new tech gadgets even faster and more efficient. So, whenever someone asks you why your new Galaxy TabPRO or Galaxy NotePRO is better, just tell them the four secret words, Exynos 5 Octa Processor.

<Pictures of the System LSI Samsung Booth at CES 2014> 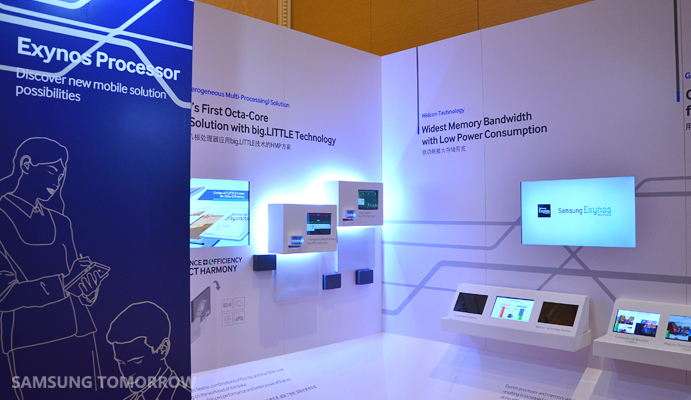 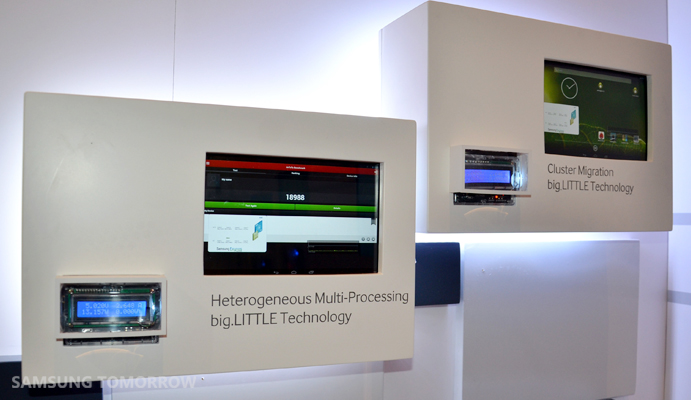 For more information, check out the links below:

* Disclaimer: All functionality, features, specifications and other product information provided in this document including, but not limited to, the benefits, design, pricing, components, performance, availability, and capabilities of the product are subject to change without notice or obligation.

Also, the mentioning of Galaxy products in this article doesn’t mean that all Galaxy devices use the component(s) mentioned above. It doesn’t imply that Exynos products are only available on Samsung devices. For more information on products with Exynos chips, please refer to the following page: http://www.samsung.com/global/business/semiconductor/minisite/Exynos/showcase.html