Making the Invisible Visible – The All New Virtual Flame Technology

Samsung has once again wowed the crowd with its groundbreaking technology and products, including 36 CES Innovation Awards recipients, at CES 2015. Among them is Samsung Chef Collection Slide-In Range with Virtual Flame Technology TM.

People, this is a cooking top attracting people’s attention at an electronics show – a STOVE. Of course we need to talk about it. So, we got together with the engineers behind this genius idea. So, how did the latest innovation in flames come to be?

When using an induction cooktop, many users find it difficult to ‘see’ if it is heating properly. This has been more of a disadvantage than a feature. Users can press the buttons on the stove to control the heat level, which is convenient, but it is not really possible to actually observe or feel it. Samsung’s response to this consumer insight is the Virtual Flame Technology, which mimics the visual feedback of gas stove flames to offer an intuitive display of the level of heat.

Virtual Flame Technology TM reveals its presence by casting flame-like glows onto pots and pans when in use. As the heat level goes up, the image of flames gradually grow bigger and brighter, giving the feeling of using the familiar gas stove. Simply put, the virtual flames are a reflection, on the side of the pot or pan, of an LED (light emitting diode) lighting embedded in the cooktop’s surface. Sounds simple, right? Well, not really.

As easy as it may seem, this is actually a completely new concept of ‘flames’. Engineers had to overcome numerous technical challenges; applying LEDs to surfaces that heat up to very high temperatures, adjusting the angle of reflection for the lights and to make them look real, just to name a few. 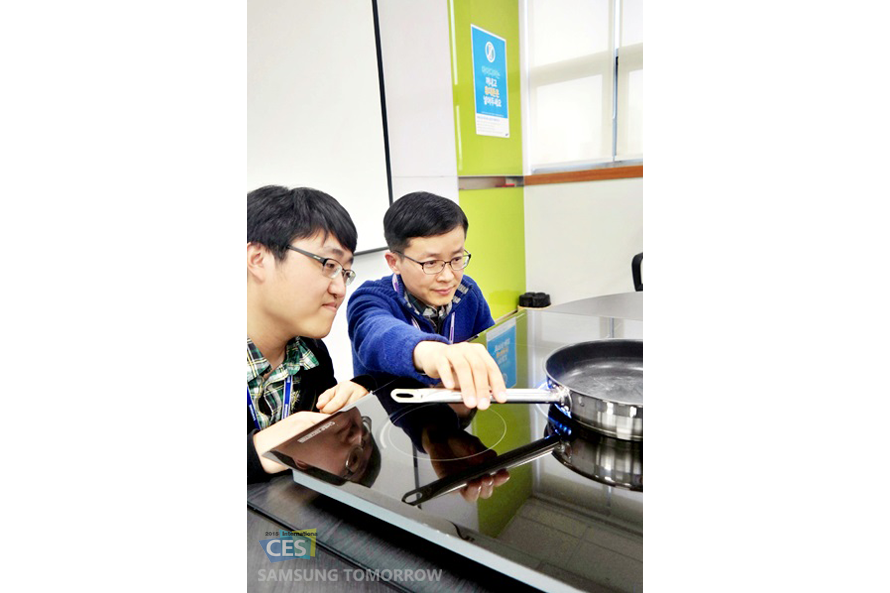 The first challenge was putting the lights in. Engineers first decided to reach out to colleagues with experience in the field. By cooperating with the colleagues that have worked on products with hot surfaces, they first listed out candidate materials with excellent heat resistance and heat generation characteristics. Then they selected the LED that can display the optimal colors of the flame. Numerous tests followed, with as many circumstances considered as possible. (Remember, Thomas Edison “just found 10 thousand ways that won’t work” before finding the right design for his light bulb.)

Now with the players in place, they needed to make the play work. And so came another series of ‘numerous’ tests. The Virtual Flame’s display differs depending on the characteristics of the stainless steel pots and pans used. This is because the flame is just a reflection of lights.

So, to make sure it provides helpful visual to its users, engineers optimized Virtual Flame TechnologyTM by testing it on actual stainless steel pots and pans. Considering the fact that the first products featuring this new Virtual Flame TechnologyTM would be released in the U.S., engineers had the most popular and commonly-used stainless steel items from the States flown in to the labs in Suwon – more than 30 of them.

Thanks to all the effort, Virtual Flame Technology proved to be one of the most distinctive features of the new Samsung Chef Collection Slide-In Range; despite it having nothing to do with heating the top, keeping the temperature consistent or anything like that. Developing its display gradually over 15 different stages, engineers finally had the flames as if it was the real thing – the flame even flickers when its on its 15th stage.

Induction cooktop ranges already had been increasingly popular with their existing advantages: they’re energy-efficient; they do not burn oxygen; and they do not generate harmful substances when cooking. Now, thanks to these men and their god-knows-how-many discoveries of things that don’t work, we can now ‘see’ how hot it is, too.

* All functionality features, specifications and other product information provided in this article including, but not limited to, the benefits, design, pricing, components, performance, availability, and capabilities of the product may differ by region and are subject to change without notice or obligation.

** Sunyoung Ji and Jisoo Lee contributed to this article. Pictures by Sunyoung Ji.