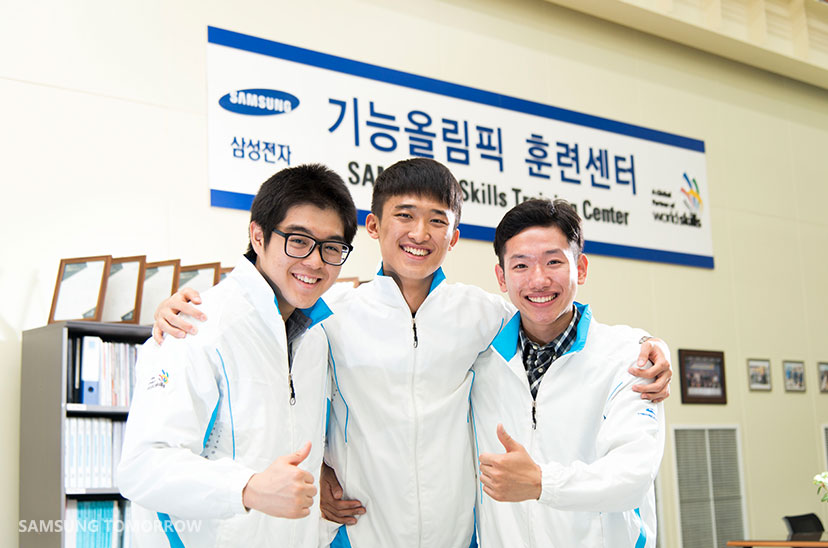 The event was created to serve as a global contest where young professionals with top tier talent compete together. The WSC also hopes to motivate and encourage the future talent of skilled professionals. In addition, the event raises global awareness of the importance of skills training and job creation by promoting international cooperation between governments and businesses.

Samsung Electronics has been training competitors to compete since WorldSkills Linz 1983, in Austria. This year, Samsung sent nine competitors, who competed in seven skills categories, winning five gold medals in Mechatronics, Mobile Robotics, Plastic Die Engineering, CNC Milling and IT Network Systems Administration, as well as a silver medal in IT Software Solutions for Business.

Since they were young, Minwoo Choi, Sanghoon Yoo and Seongje Park all had a keen interest in their respective fields. After joining skills training clubs in high school, they started their journeys to prepare for the National Skills Competition, their careers as technicians and the challenges of competing at the WorldSkills Competition.

To participate in the WSC, they not only had to prove themselves in the National Skills Competition, but also had to pass the selection process to join Team Korea. Their determination and hard work paid off; each scored medals in the national event, winning their tickets to the WSC. In addition, they were offered jobs at Samsung, which gave them the opportunity to prepare for the competition.

All three agreed that Samsung spared no effort to provide equipment and facilities for the WorldSkills competitors, which was invaluable. “I was even more pleased to get practical advice from our seniors who have professional experience,” said Yoo.

Though overwhelmed by the sheer scale of the venue at the WSC site in Brazil, the whole Samsung Team supported each other and cheered for the others to boost morale and confidence as competitors.

During the four-day long event, each competitor must finish four to six tasks within a given time limit. Park faced additional challenges during the contest; the interface system for his stations and software device did not function properly. Realizing that his equipment was faulty, he made a request to the expert, but it was not accepted. Instead of giving up, he skipped lunch with his partner to find the faulty part, finally fixing the problem.

Choi credits his success to hard-earned expertise through diverse training programs, provided by Samsung. Though Yoo initially found it difficult to adjust to his new environment on his first day, he soon overcame this challenge and was able to focus on the competition.

Because of age requirements and a one-time entry into the competition, winning a medal at the WSC is a once-in-a-lifetime opportunity. Each could feel the special triumph that was “truly beyond descriptions” at the moment of victory.

When asked the secret behind Team Samsung’s success, all three agreed it was due to “hard work and passion.”

“Some of my training coaches are champions of WSC, and their tips and know-how helped me a lot,” said Yoo. The three medalists also expressed their belief that Samsung’s dedicated support served as a driving force of the team’s success.

The young men were also eager to express their thanks to the support staff. “The entire staff, including experts, training coaches and volunteer translators, really assisted us in many ways, enabling us to concentrate solely on the competition. Throughout the event, we were really grateful to have such great people supporting us,” said Yoo, on behalf of his teammates.

With world-class expertise, good manners and attitudes, these young men truly deserve to be called among the world’s best.

Having achieved their goals, Samsung Tomorrow asked the young men about what’s next. “I’ve concentrated on the practice so far, so I plan to study the theories more to be a truly skilled technician. My motto is ‘review the old to learn the new’. I will continue to study IT technologies to join the leaders of IT security,” said Choi.

Expressing his hope for the future, Yoo said “Going forward, my wish is that more people will give their attention to skills competitions and support young professionals.”

“My ambition is to be the first master engineer in mechatronics in Korea,” said Park. “I was thrilled to experience the cutting-edge automated facilities at Samsung with my own eyes. In the future, I want to design an automated production line of my own.”

Advice for the Future

The three young medalists shared their advice for young people with Samsung Tomorrow. “Don’t get distracted by what others say, but go all the way and do your best to achieve your goals,” said Yoo. “Always be positive and grateful,” added Choi.

Park’s last message reflects the spirit of the WSC. “Be proud of your own expertise, and never give up anything before you really try it.”