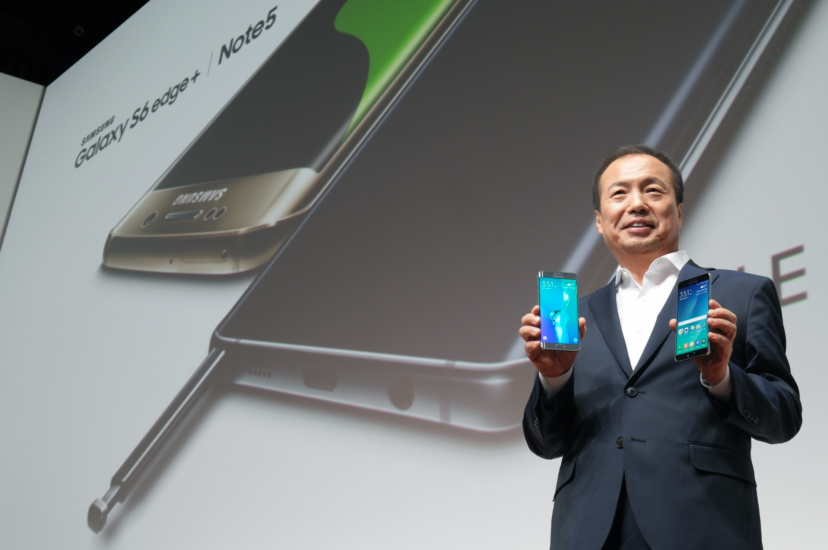 JK Shin, CEO and President of IT & Mobile Division, Samsung Electronics, opened the Samsung Galaxy Unpacked 2015 event on Thursday morning by announcing the release of the two newest Galaxy smart devices, the Galaxy S6 edge+ and the Galaxy Note 5.

Speaking in front of a packed audience at Alice Tully Hall at the Lincoln Center in New York City, Shin emphasized the core vision behind all of Samsung’s innovations, always pushing forward based on listening to consumers.

“We have a simple philosophy. We serve you, by listening to you,” Shin said. “We trust you. And we like to gain your trust the old-fashioned way, by offering better products and by offering new products first.”

Shin acknowledged that this approach requires more than just persistence, but courage. “When Samsung released its first Galaxy Note, some said we were crazy.” Samsung understood that customers wanted a device that helped them get things done, and also offered great viewing experience. As a result of relentless innovation, the Galaxy Note didn’t just succeed. “It created a category,” said Shin.

Shin continued his speech with the concept of flexible screen technology that Samsung revealed two years ago at CES. Shin says Samsung truly believed in that concept. “So we bet big,” he affirmed. “We listen, we learn and we take risks. We push ourselves to be first and others join us.” And that is how technology spreads and changes the way the world lives. Developing better cameras, higher-resolution screens, faster battery charging technology, all of these propel the entire industry.

“Today, the journey continues in the large screen category that Samsung created,” Shin announced. “And we are still betting big.” Samsung is revolutionizing the way people access information. Bigger screens are not only better for media and entertainment, but also for organizing and multi-tasking.

As Shin unveiled the two new devices, he said, “Look at these two beautiful smartphones. Both devices offer an immersive viewing experience, but they fit right in the palm of your hand. The screens are bigger, but the phones are actually smaller.”

Lastly, Shin announced that Samsung Pay, Samsung’s mobile payment service, was close to making its debut, in Korea and the United States first, followed by other major territories. The Galaxy S6 edge+ and the Galaxy Note 5 will both support Samsung Pay out-of-the-box. “It will be accepted almost everywhere, on day one,” said Shin.

Samsung has introduced cutting-edge technology and beautifully designed mobile devices through its Unpacked events since 2009. Samsung proactively continues to think about how the technology and design of its products help improve the daily lives of users everywhere. It’s through this understanding that Samsung will continue to stay ahead of the curve and lead mobile technology in the future.