Affordable 3D-printed microscopes for grade-school biology classes; a motorcycle helmet with an integrated camera and safety lights; a virtual 3D-preview clothing fitting app – these were some of the proposals from a hackathon that involved about 100 young creators from Belgium and Morocco. 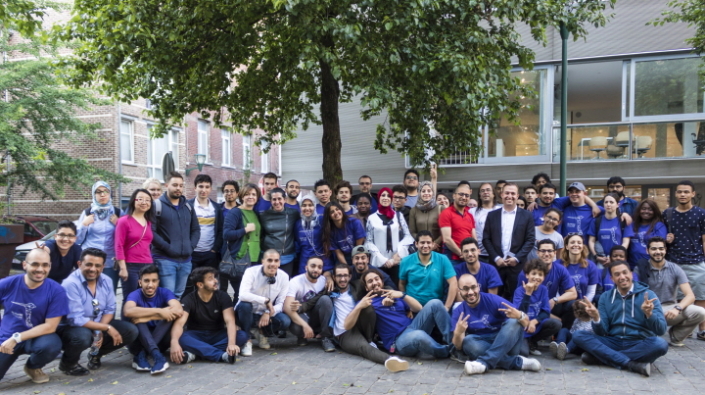 About two weeks ago, June 22 through 24, the BeMor(e) Start-Up Camp took place at MolenGeek, a unique workspace for young entrepreneurs. With the objective of mashing ideas and technology to build prototypes and set up tech start-ups, the event resulted in 11 projects being presented before the jury at the end of the hackathon weekend. Some of these projects will be continued at MolenGeek; some will be followed up in Morocco. 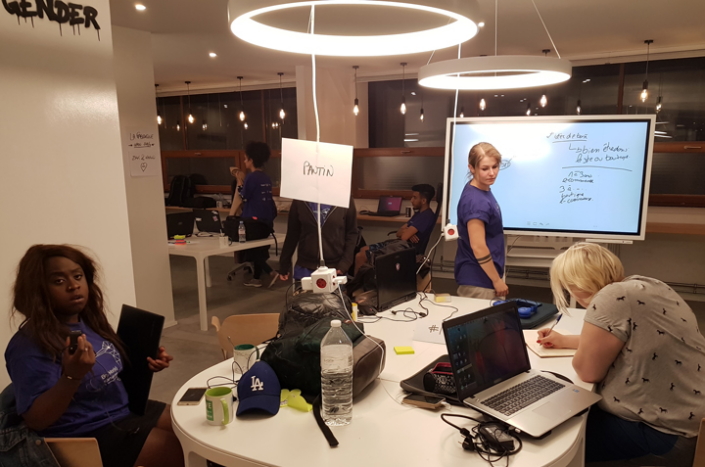 Team Pantin, who came up with a digital shopping app including a virtual fashion preview solution, discusses their project during the BeMor(e) hackathon

Geekoscope was the winner of this hackathon. Led by a young biology teacher under a strict budget, the team devised a smart, affordable, 3D-printed microscope. Knowing that ‘real’ microscopes can be expensive, they came up with a cost-efficient alternative substituting the various lenses and moving parts of a microscope with a now-ubiquitous smartphone. The microscope is also to be environmentally sustainable, using 3D-printed, recycled plastic. 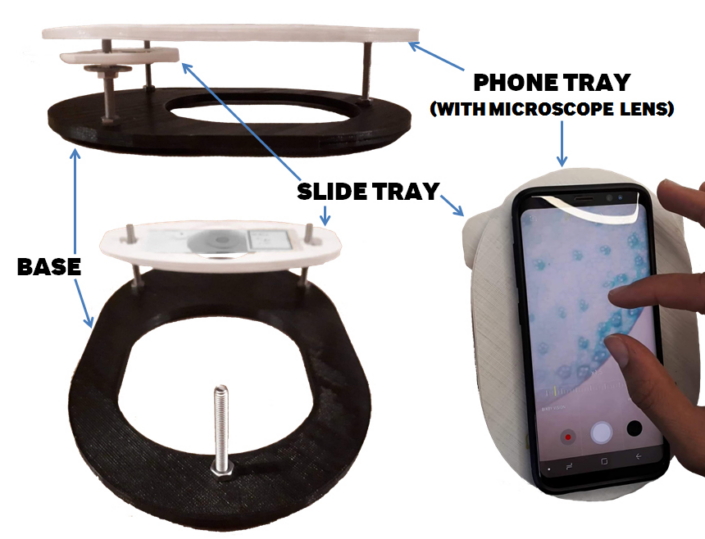 Geekoscope, using a smartphone as the core enabler, can be controlled through the camera app

Eyelight came in second with an idea for a safety enhancing add-on for motorcycle helmets with smarter safety features. The device is to latch on to motorcycle helmets like an octopus and to feature an integrated camera to function as a dash-cam for the rider as well as fluorescent lights to function as brake- and turn-signals. 3rd-placed Pantin focused on creating an online fashion shop based on an app. This app, allows you to insert your body measurements, which allows the app to provide a 3D preview and suggest items that fits best. 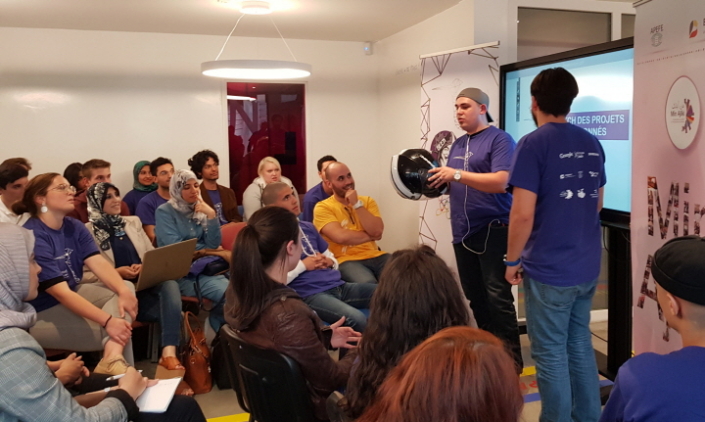 EyeLight presents their solution at the BeMor(e) Start-Up Camp

The majority of the projects proposed at BeMor(e) will continue development at the MolenGeek workspace. After further development, some of these projects will form the Belgian delegation of the MolenGeek and BeMor(e) Startup Camp that will travel to Morocco in December to continue their journeys.

BeMor(e) Start-Up Camp was supported by various players in the tech field including Samsung Electronics and the Belgian Government. Start Up Maroc, an organization that promotes startups in Morocco, and MinAjliki, a Moroccan organization promoting young female entrepreneurs, also partnered in the event as many people in Molenbeek trace their roots to Morocco.

MolenGeek has turned into a beacon of hope for young adults in a neighborhood once tied to terrorism. Sint-Jans-Molenbeek, a municipality located west of the City of Brussels, is being transformed into a seedbed of innovation thanks to the collective efforts from the local government, tech companies like Samsung Electronics and, most importantly, its energetic young citizens of all ethnic backgrounds, genders and religions.

In September, 2017 the initiative was presented as a best practice case study in the contribution of a public-private partnership to achieving United Nations’ Sustainable Development Goals (SDGs).

MolenGeek continues to engage young innovators through its workspace, start-up incubation programs, hackathons and education programs like its monthly Coding Week events. Since its opening in January, 2017, MolenGeek has engaged more than a thousand young adults.*

“We support MolenGeek and joint-events like the BeMor(e) Start-Up Camp because we want to foster entrepreneurship among young people,” said Aron Wils, Samsung Electronics Benelux. “They are the future of our society and we’re very glad to see the human-centric technologies they’d like to bring to make people’s lives better.” 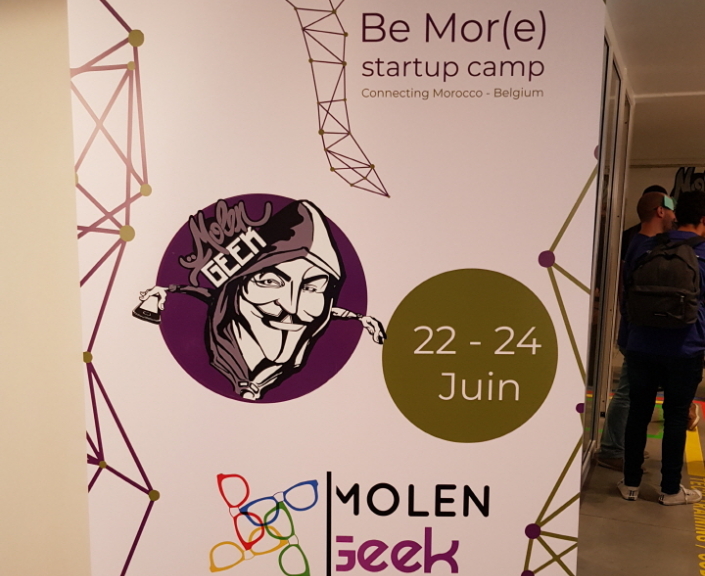 Team Geekoscope discuss the design of their smartphone-powered, 3D-printed microscope for biology classrooms 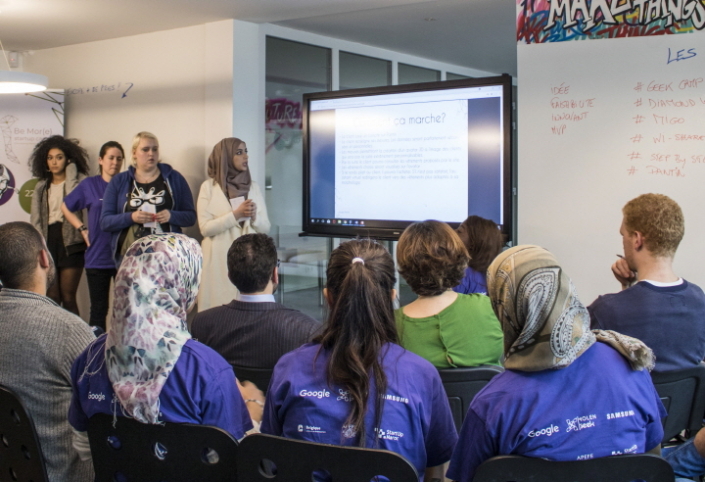