10 months. That is how long it has been since Samsung introduced its very first wearable device, Galaxy Gear. Now, 10 months later in the present, Samsung has a total of 4 wearable devices under its belt. And we know that number is going to change. 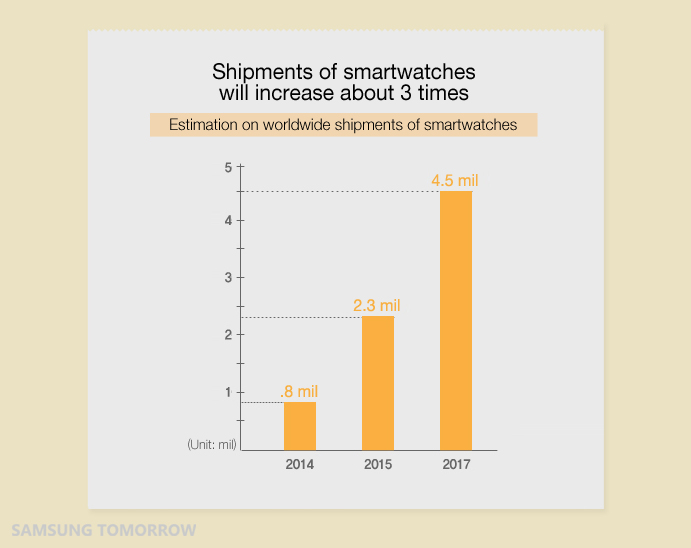 Canalys News projects** the smartwatch market will grow 500%, while shipments of smartwatches will increase about 3 times (2.3 mil to 4.5 mil) compared to last year. As some of you may know, it is quite unorthodox for Samsung to talk about its on-going projects, so the recent announcement concerning the on-going wearable project, SIMBAND, may have come as a surprise. However, it is pretty much a confirmation that Samsung will continue its effort on wearable devices. 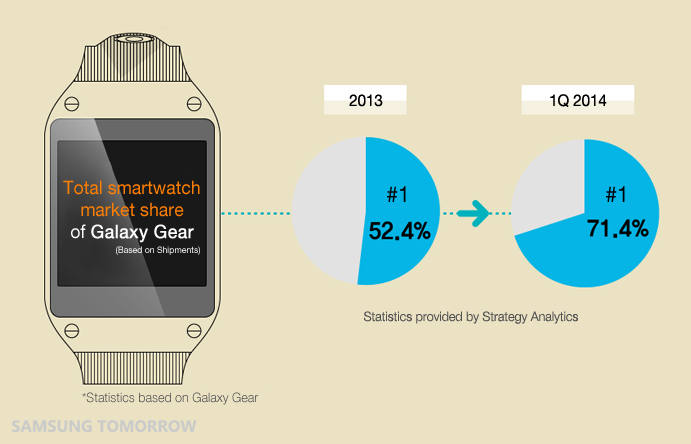 OK, ‘effort’ is a vague word, so let’s dig in a bit deeper. For example, Samsung Galaxy Gear is an interesting device, because, when it was first introduced, there weren’t many smartphone compatible wearable devices that could offer calling, messaging options, photo and video recording and more. It was basically the first of its kind.

The importance of this is that it gave Samsung a head start in developing better wearable device of its kind. As continuous improvements technologically being a given considering their effort in R&D, the real advantage is the fact that it has been able to gather more feedbacks from its users to improve the UX and design they want.

This was also result of the VOC (voice of customers). Although people were excited about Galaxy Gear’s ability to take pictures and support voice features, many wanted those supporting components to be on the main body. Samsung made that change.

Water and dust resistance. This doesn’t need much explanation. Since the wearable device is worn on the wrist, they wanted it to be more compatible with daily activities. Although water and dust resistance are almost taken for granted with the new Samsung mobile devices, according to some of the senior developers at Samsung, this required a significant amount of time and effort in research and trial and error.

No one can deny the trend of health consciousness. As Gartner, an IT research institute, predicts, smartawtches are expected to be the device for personal healthcare.  As the importance and awareness of health rises among people, it has become very significant for IT devices to support peoples’ desire to stay fit. Gear 2 devices and Gear Fit feature the heart rate sensor, which allows various types of health/fitness functions and apps.

It is surely great news for Samsung that it only took 10 months to lead the smartwatch market as the market is estimated to grow significantly; once again, for Samsung. For users like us, all we want is better product. Not so coincidently, Samsung has marked itself as the leader in the smartwatch market by improving its product based on what users want. Therefore, as long as we want better wearable device, you can surely count on Samsung’s next wearable device; which we may get sooner than later.

*Statistics provided by Strategy Analytics. Numbers based on shipments

** Statistics provided by NPD. Numbers based on sales.

*****All functionality features, specifications and other product information provided in this document including, but not limited to, the benefits, design, pricing, components, performance, availability, and capabilities of the product are subject to change without notice or obligation.