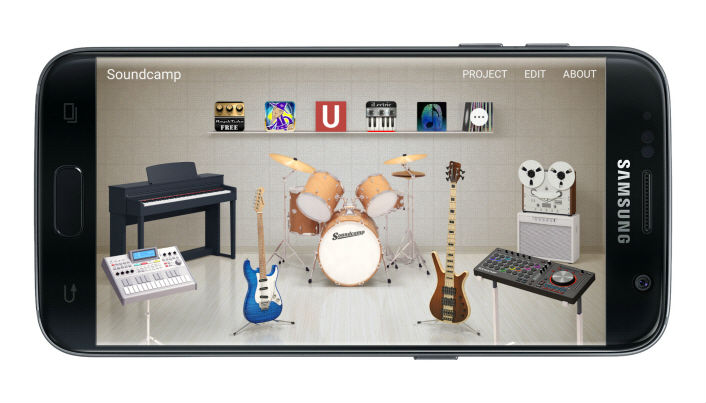 Samsung Soundcamp, a mobile DAW (Digital Audio Workstation) and MIDI (Musical Instrument Digital Interface) sequencer application, functions as an easy-to-use studio recording system that gives musicians access to an ensemble of virtual instruments, as well as an audio recorder. In the latest version, Soundcamp offers artists even better tools, including its new launcher design, to fine-tune their skills and produce creative tracks.

Upon opening the app, you can find what looks like a real life rehearsal room. On the floor of the studio, there are basic, preset musical instruments that users can access and play with a simple tap. The app’s plug-in style, open-concept structure also gives users the option to connect to and record with various third-party music apps, which are located on the shelf above the instrument icons.

Among the instruments that come pre-equipped on Soundcamp include an upgraded guitar and bass.

Users can play the guitar in either Chords Mode by strumming the on-screen strings in the same way they would play a normal guitar, or in Notes Mode by selecting notes on the guitar fretboard. Other basic techniques such as string muting, string bending, hammer-ons, pull-offs and slide guitar can also be performed to create a richer, more realistic sound. There are also both electric and acoustic timbres available, and others can be downloaded.

The bass can be played in Notes Mode, and the previously mentioned techniques can also be applied. The option to play the bass in fingered and picked timbres allows for an even more customized melody. 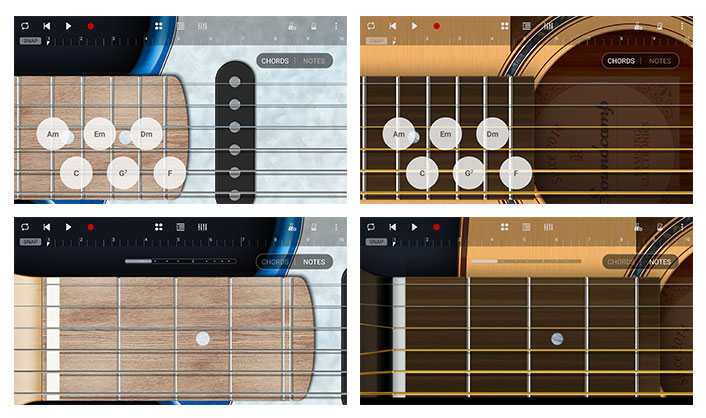 In addition to improving the app’s instruments, Samsung updated the Looper feature to help musicians to more easily produce the sound they want.

Looper allows users to play live by manipulating the elements of sample loops, short sections of tracks that have been edited to repeat seamlessly. The technique is commonly used in contemporary musical genres like hip hop, trip hop, techno and contemporary dub.

In the newest version of Soundcamp, Samsung kept this easy-to-use function for beginners and named it Pattern Mode, as it mixes 256 pre-made patterns from Loopmasters, the world’s leading producer of sample libraries. But it also expanded Looper by adding a more advanced Song Mode, which now gives more experienced musicians greater freedom to express themselves.

This new mode allows users to follow a professional musician’s performance using up to 64 samples, instead of the 32 offered in Pattern Mode. It also allows the user to play multiple cells at once in a group unit rather than one cell per vertical line at a time.

Song Mode also allows for a more detailed beat synchronization so users can ensure tracks are precisely what they want, while sound reactive lights move and change with the music, producing an eye-catching effect.

While Song Mode was designed specifically for experts, it also enables users to learn how to write or practice their own music by following along with songs written by well-known professionals. (Some songs are embedded in the app and can be downloaded, and more tracks will be available in the future.) By providing previews (auto play) and finger performance videos, the app demonstrates the process in the same way that popular rhythm games do. 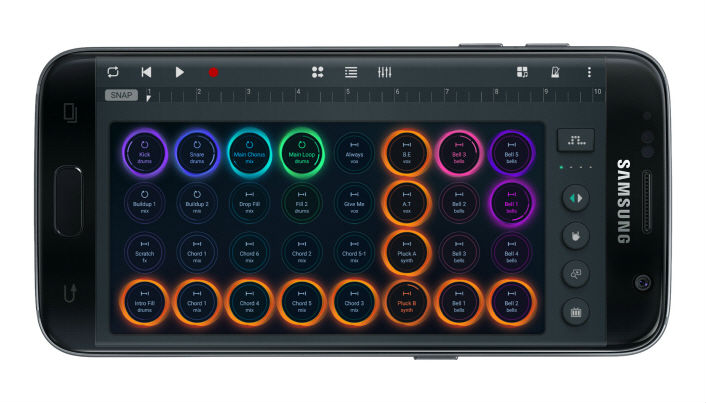 To celebrate the launch of the new version of Soundcamp, Samsung, along with JYP Entertainment—one of South Korea’s biggest entertainment companies—will host the Remix Contest from April 18. At the event, participants will compete to produce the best remix of “Still Alive,” a track recently released by Korean recording artist JY.Park.

Soundcamp offers all the tools artists need to unleash their creativity and create unconventional tracks that go above and beyond listeners’ expectations. And, with the newest additions to the upgraded version of the app, users can create unique tracks in a variety of styles, or incorporate and mix their own sources, more efficiently and precisely than ever.

Download Soundcamp in Galaxy Apps or the Google Play store.