Samsung Electronics opened key interactive Galaxy experiences at the Samsung booth, CES 2014. As mobile technology takes center stage at this year’s show, Samsung is taking its position as an industry leader to new heights with a series of interactive partner showcase displays at the booth. Galaxy mobile device partnerships with BMW, Trek Bikes, Kidrobot and 3D Systems will be on display at the Samsung booth #12004 in the Central Hall of the Las Vegas Convention Center, January 7th – 10th.

The BMW i3, the world’s first fully connected electrically-powered car, features an integrated SIM card, giving drivers access to the vehicle from anywhere at any time. By utilizing the BMW i Remote Application, drivers can share information with the vehicle directly through their mobile device to perform useful functions from being able to access the battery life and driving range to checking to see if the windows are shut or adjusting the car’s climate remotely. 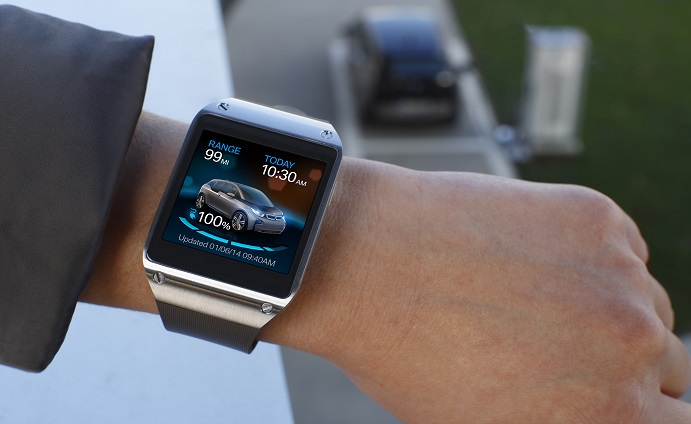 Samsung and BMW have collaborated to create a Samsung Galaxy Gear showcase specifically designed for the BMW i Remote application. The Samsung Galaxy Gear extends the smartphone experience to the user’s wrist giving real time updates and convenient access to their car. Users can view important information on the Galaxy Gear without having to take their smartphone out of their pocket or unlock a screen.

In the showcase, the Galaxy Gear with BMW i Remote functionality provides users with important information about charging and vehicle status, including: 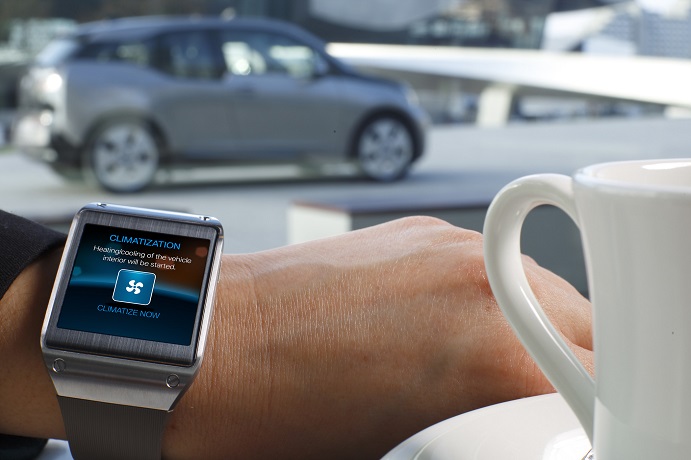 Aside from status updates, users can also remotely regulate the temperature of their BMW i3’s interior before getting in the car with either the touch based UI or Samsung’s S-Voice speech command on their Galaxy device. In addition, drivers can activate the “Send to car” function with their Galaxy device’s S Voice feature to send an address directly to their BMW i3’s navigation panel, instantly making their car ready to go as soon as they are.

The BMW i3 will be on display at the Samsung booth with staff on hand to demonstrate the BMW i Remote Application by utilizing both Samsung Galaxy Note 3 and Galaxy Gear devices.

Trek Bikes – Taking the Connected Lifestyle to the Next Level

Samsung and Trek Bikes, manufacturers of one of the world’s highest performing bicycles and cycling equipment, have teamed up to enhance the cycling experience with powerful smartphone technology.

·         While pedaling, the bike can charge the Galaxy Note 3. This enables users to enjoy long bike rides without worrying about their smartphone battery running low, even with GPS, mapping and other applications running.

·         Through the Galaxy Note 3 seamlessly mounted into the handlebar or from a Galaxy Gear on their wrist, cyclists can wirelessly connect to the bike frame-integrated sensor and track vital statistics, such as speed, cadence and distance.

Two Samsung Galaxy –Trek Bikes will be on display at the Samsung booth alongside a number of Samsung Galaxy Note 3 and Galaxy Gear devices. Visitors can ride the bikes to experience the new conceptual integration.

Samsung and Kidrobot, the world’s premier creator and dealer of limited edition art toys, signature apparel and lifestyle accessories, have collaborated to design unique, custom figurines inspired by the power of Samsung Galaxy mobile devices. An increasingly important platform for self-expression, mobile technology connects with users through mobile accessories, creative applications, or digital design within the device itself. Capturing Kidrobot’s inspired design on both the Galaxy accessories as well as in the devices themselves creates multiple new touch points for artistic expression.

The Kidrobot Installation at the Samsung booth will introduce the original Samsung Galaxy-inspired figurine from Kidrobot. Three large imaginative Sculptures and 500 mini-figurines will be featured alongside Samsung Galaxy devices and accessories at the Samsung booth. Users will have multiple touch-points with which to engage with these creative designs, letting them enjoy the expressive, powerful, and fun artwork from Kidrobot’s world of popular artists in a variety of connected ways.

World-renowned artists will also be on hand at the Samsung booth and live painting the five-foot Kidrobot X Samsung figurines, one for each of the first three days of CES 2014.

3D Systems – Bridging the Gap Between 3D Printing and Consumers

In addition to these innovative and creative collaborative partnerships, Samsung will also be partnering with 3D Systems, a leading provider of 3D content-to-print solutions, to showcase the possibilities of 3D printing for consumers.

Samsung’s Galaxy Note devices are built for simplifying design and creation and in hands of millions of consumers around the world. By partnering with 3D Systems, Samsung is able to show in a live demonstration how easy it might be for consumers to take their creative process one step further and render their designs in 3D, opening up a whole new world of design possibilities. 3D Systems has developed an application that will allow Samsung Galaxy Note users to design and create special 3D printed coins which can then be inserted into specially design Galaxy Note cases. Visitors to the booth will also get the chance to create various objects on Galaxy Note devices and send them off to be professionally printed in 3D.