Pink Galaxy S5 is only available in Japan, Here is why

Unfortunately, I’m not Japanese, but it seems like pink is very popular there – it’s never hard to find this ever-present color. Well, actually, it is pretty obvious that they do love pink:

Cherry blossoms are famous in Japan, and worldwide, for their beautiful pink petals. From late March to mid-April, or even early May, the country’s iconic flower “Sakura” (“Cherry blossoms” in Japanese) bloom all over Japan. Thousands of people fill the parks to enjoy flower viewing parties under the trees with friends, family, and colleagues. Especially in cities like Tokyo, these parties often go on until late at night. For the brief period that the cherry blossoms bloom in Japan, it seems like the entire country completely falls in love with pink.

Hello Kitty, created in 1974 by a Japanese company named Sanrio, is another example of pink’s popularity. This cute white-headed character, usually with a pink ribbon on her ear, is very popular and so loved by teens and adults in Japan that the range of Hello Kitty merchandise covers everything from stationery, purses, and clothing to mobile phone covers and even underwear. In Tokyo, you can even take the Hello Kitty Bus, which features the character on the outside and inside! Not only is it popular in Japan, but it has also been exported all over the world and captivated people’s hearts. You can have a meal at Hello Kitty Café in Seoul, enjoy Hello Kitty tea with Hello Kitty shaped cookies in the Netherlands and visit Hello Kitty Museum (unofficially run by a fan) in Germany.

• Why not? Enthusiasm for Pink

Do we need a reason to have a love of something? Not really. In Japan, eye-catching shades of pink are visible just walking down the street.

So as we can see, pink is deeply loved by Japanese people. It’s not the first time Samsung has offered a pink Galaxy. However, for this particular offer in Japan, two shades of the Pink Galaxy S5 were designed specifically for Japanese users, based on consumer preference research.

In Japan, the first two colors selected for the Galaxy S5 were black and white, targeted for male consumers and for unisex respectively. To find the third color for female users, a survey* on smartphone color preference was conducted. Pink was the most preferred color for Japanese female users, from teenagers to those in their fifties.

*Note: The consumer preference survey was conducted by Cross Marketing in February 2014. 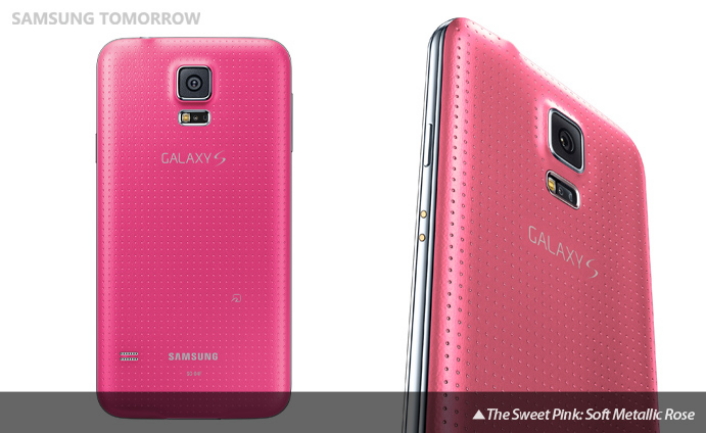 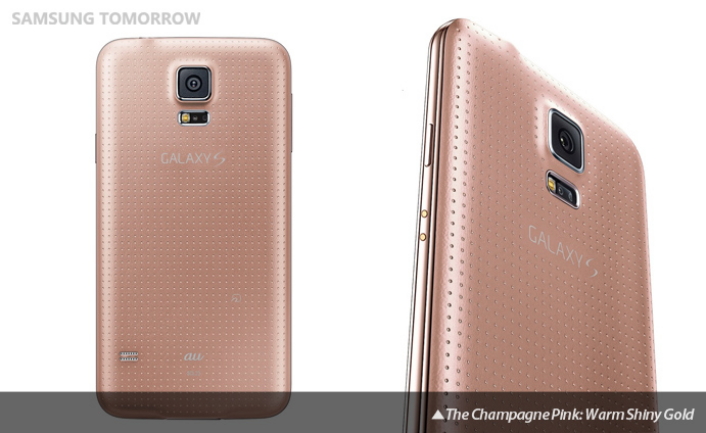 As gold was given as the second most popular color, “Champagne Pink”, the golden pink Galaxy S5, was prepared as well. Providing a calm and refined beauty, this “Warm Shiny Gold” model is designed to offer an exclusive high-class aesthetic. It is offered by KDDI.

Concluding in Japan, the Galaxy S5 release is complete all around the world. It has broken a new record, being the shortest release in the most countries around the world for a single smartphone model, appearing in around 150 countries in just 35 days, since April 11th.

With the essential features, such as the battery, camera, and display strengthened to new heights, the Galaxy S5 has shown its care for the consumer’s life. And again, taking into consideration a deep affection for pink, the Galaxy S5 wore the new color for its Japanese users. With Samsung Electronics, now, please have it your own way!