Providing Firefighters Another Pair of Eyes

‘What would I do if my kids were left in a blaze like this? Heck, what if I don’t make it back?’

While the account above is fictitious, real-life emergency responder Han Gyeong-Seung of the Dongducheon Fire Department had been in a similar situation; only to face the tragedy of finding a victim after the fire was fully extinguished. Realizing there had to be a better way to navigate through a fire scene, Han reached out to Samsung Tomorrow Solutions in May, 2016. 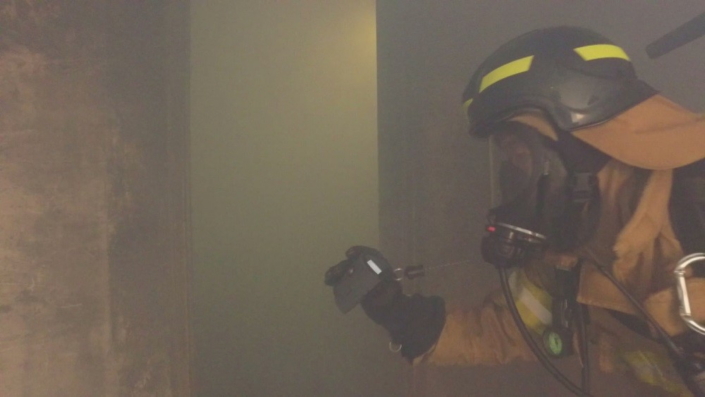 A fireman demonstrates IGNIS in a simulated fire

Fire is supposed to give light, not take it. The contradiction is almost funny – would have been if not for the scarring aftermath fires tend to leave behind. Of the many difficulties firefighters wrestle with, securing clear sight amidst blackouts and smoke-filled rooms is one of the deadliest. Insufficient vision not only makes it difficult for emergency responders to navigate the smoky labyrinth of live fire scenes but can also prevent them from spotting victims or locating the source of the fire in time.

A Solution… Which Is Also a Problem

One solution is to arm firefighters with thermal observation devices (TODs) which use thermal imaging cameras to highlight heat sources – usually survivors’ body heat or the origin of fire – against the rest of the scene. The problem? They’re difficult to use, heavy and expensive. 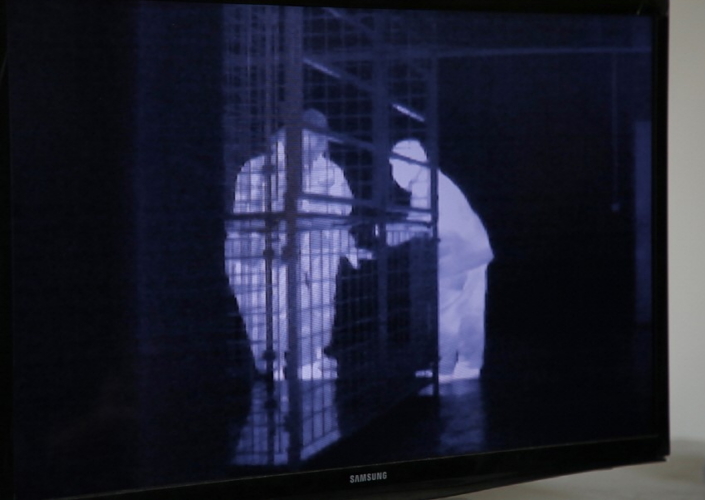 This infrared image, from the 1st field test, is similar to what firefighters can see using IGNIS

Conventional TODs for firefighters were mainly designed for a team rather than as a personal device for each member. The emergency response unit would have to rely on a designated operator to run to and fro to be the eyes for the whole team, limiting the effectiveness of this equipment.

Moreover, conventional TODs weigh around two kilograms, which is a hefty addition to the 20-to-40 kilograms of gear firefighters already have to bear. As with any physically challenging activity, every gram shed counts in improving performance.

And costing about 20 million Korean Won (roughly 19,000 US dollars) per device, many fire stations aren’t able to secure this equipment with their limited budget. The typical Korean fire station may have one or two of these – or none at all.

In a nutshell, they were oversized, clunky and expensive cameras little different from the ones used in research facilities.

In Search of Tomorrow’s Solutions

Samsung Tomorrow Solutions, the contest Han entered, is a social contribution competition where Samsung Electronics searches for social innovation ideas to fund and co-develop. The idea of a goal-specific TOD, aimed to assist men and women who risk their lives daily to save others, was met with open arms. 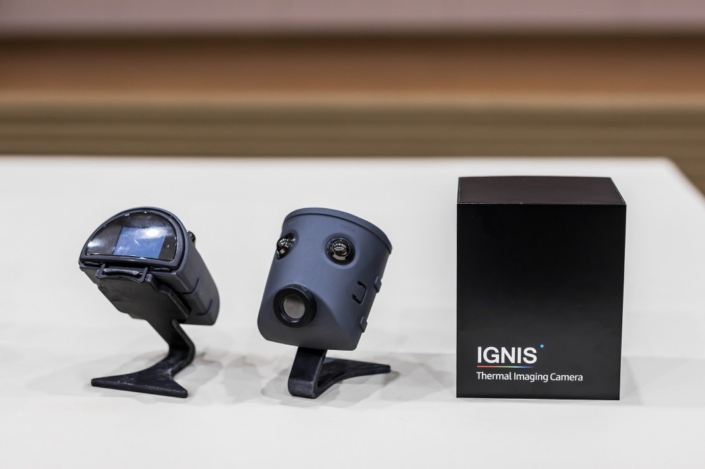 This project, dubbed IGNIS, won grand prize in each the two years it took part in Samsung Tomorrow Solutions – IDEA Grand Prize in the first year (2016), winning critical prize money as well as additional funds to help further develop the idea, and IMPACT Grand Prize the following year (2017), providing the team still additional funds as well as support from Samsung Electronics’ engineers to help realize the solution. In 2017, a 5-person C-Lab team was designated to help expedite the IGNIS development process.

The goal was clear-cut from the beginning: A compact, easier-to-use, cost-effective thermal optical device that can withstand extreme conditions. The requirements for IGNIS were so different from conventional TODs that searching for incremental improvements didn’t make sense. So the team went to the drawing board and started from scratch.

Over the course of three prototypes, three field tests and multiple surveys, the IGNIS team sought advice from 104 real firefighters, whose collective experience added up to roughly 800 years. 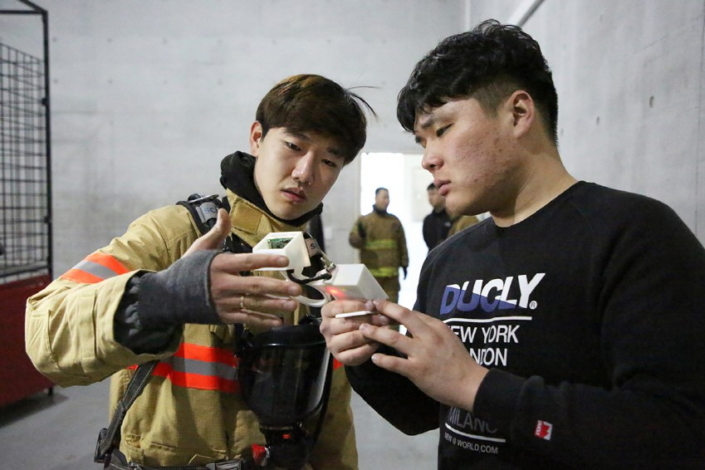 First, according to the firefighters’ feedback, the function was narrowed down to a simple, practical real-time viewing option. No screen capture; no multiple viewing modes; no excessively high resolution to burden the image processing unit; no replaceable batteries. Such changes would allow the team to build devices that are much more cost-efficient than previously-available TODs.

Doing away with unnecessary features also helped simplify the user interface down to two buttons, instead of the plethora of buttons and arrow keys.

Second, with a focus on reducing size and weight, the IGNIS team designed the circuit around ARTIK 710, an IoT-ready module with basic processing, memory, and connectivity features in a single package. Leveraging the expertise and experience in creating cutting-edge mobile devices and eliminating unnecessary components, the team was able to reduce the size and weight drastically – down to 350 grams.

Finally, the case too, was reimagined to free up both hands of the firefighter. Taking a precious hand away from a firefighter limits the unit’s fire-fighting and rescuing capacity – that’s a hand that could have been taking down obstacles, holding a hose, carrying a victim, or assisting the other hand in doing more demanding tasks.

After countless designs, mockups and prototypes, IGNIS settled on a compact shell about the size of a hand axe from the Stone Age for ease of use. IGNIS also features a latch – it can be attached to the mask, on shoulders, or other compatible accessories where the user sees fit. 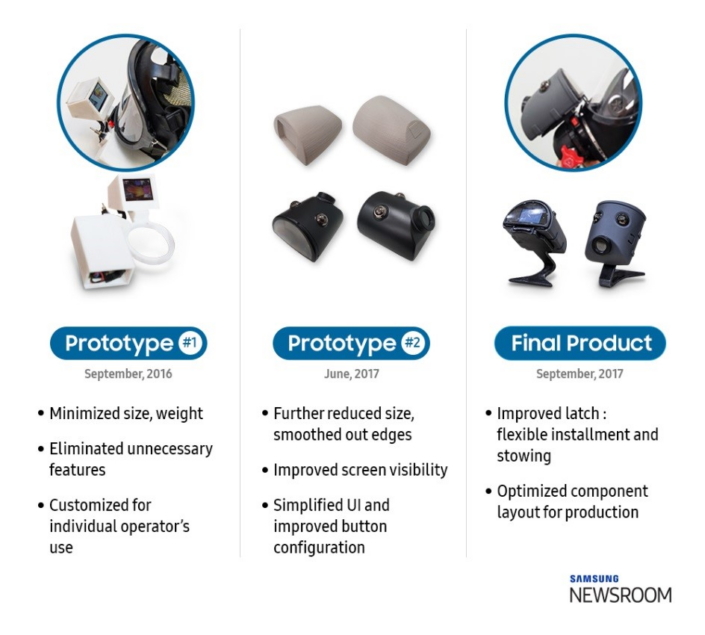 In November, the team produced 1,000 units and donated them to fire departments, safety centers and National Counter-Terrorism centers throughout Korea. 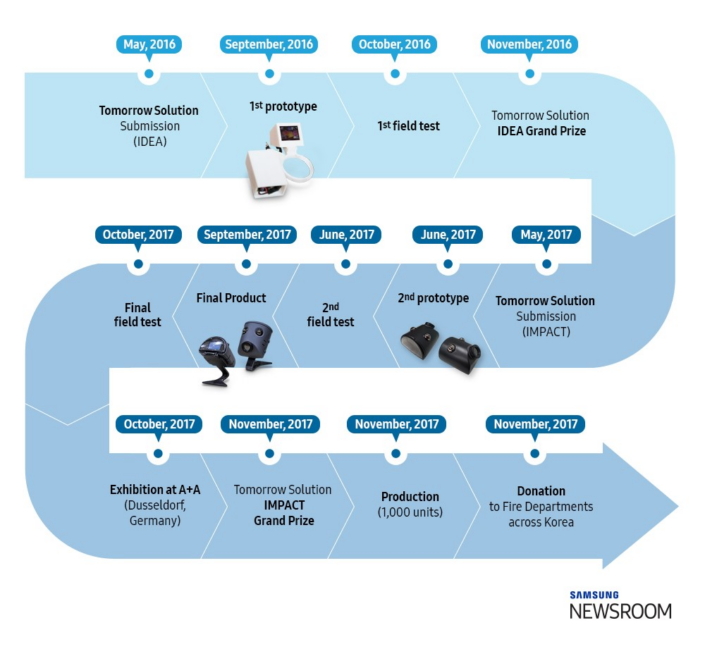 From idea to reality – the 20-month journey of IGNIS

1,000 IGNIS devices have been commissioned for about half a year now, and Han has set up a digital forum to share information about the device. The following are stories from firefighters that have used IGNIS in real life:

Seulchan Jeong (Bucheon Fire Department): Just this February, we received a call reporting smoke but couldn’t find the source in the multi-residence building. Using IGNIS, we were able to spot a sealed room that was 4℃ hotter than the others to find a suicide attempt using charcoal smoke. I’m happy to report that we were able to save another life.

Anonymous (Daegu Fire Department): We had a motel fire. The building had maze-like corridors and we didn’t have information on which rooms were occupied. We used IGNIS to do quick visual sweeps of each room and were able to save all guests in the establishment.

Anonymous (Dongducheon Fire Department): We thought we had an electric fire – smoke was coming out of a power outlet. But upon double-checking with IGNIS, we learned that the strongest hot spot was in the ceiling. Quickly finding the source of the fire, we were able to eliminate all threats before more serious damages occurred.

Anonymous (Gangwon Fire Department): We had put out the major flames in a recent textile factory fire. Using IGNIS we were able to quickly locate and put out residual fire as well. Otherwise, we would have had to open all the hatches in the pipes and machinery and fully sweep the ceiling to confirm complete extinguishment, which would have been very time-consuming and potentially dangerous.

Anonymous (Incheon Fire Department): IGNIS made me think of my fallen colleagues – many would have survived if we had more TODs in the field.

Created in 2013, Samsung Tomorrow Solutions is an open social contribution contest that helps people pursue and realize ideas to change society for the better through technical solutions.

Samsung Electronics selects submissions under four categories – Education, Health-Medical, Environment-Safety, and Local Community – and provides support as well as financial prizes to the winners. For ideas that have particularly great potential, the company can invest additional assets including financial, technical and human resources, to further develop the solution.