Revealed: The Future of Television 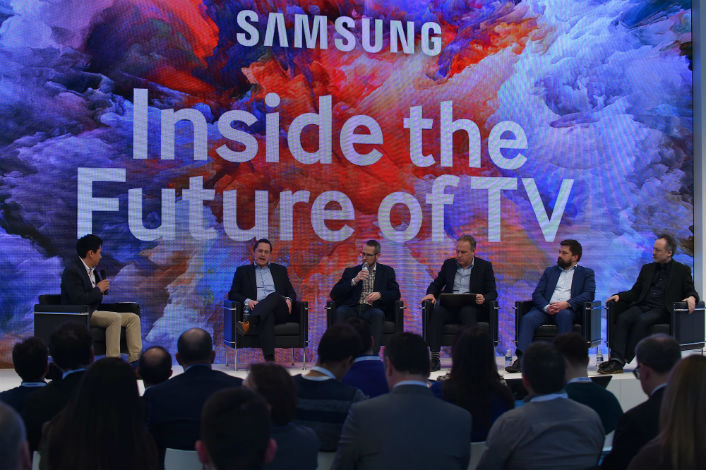 Television is on course to collide with virtual reality and create a host of as-yet-unimagined experiences; that’s the view of Oscar-winner Tim Webber, Chief Creative Officer at Framestore, who was speaking at Samsung: Inside The Future of Television, a future-gazing panel event that saw leading minds from the worlds of technology and entertainment explore and debate what’s next for television in our lives.

TV: From Viewing to Experiencing

The panel began by looking at how television is moving from something consumers passively view, to an active device we experience.

First, the panel considered how experiences on mobile devices can be used to enhance the TV experience. Dual-screening is well established, with Grzegorz Stanisz of Samsung stating that “30% of the time, your eyes are away from the TV screen”, a point Tim Webber supported: “People are looking at their phone as much as at the TV. We need to produce content that works in companion with what’s on the big screen…content without ‘joins’.”

The continued growth of on-demand content is a trend all the panel expect to grow and grow. “Turning to how that experienced is controlled,” design expert Simon Mills was unequivocal: “The TV remote is on its last legs. Digital natives have grown up controlling their own devices, curating their own content.  No longer is the remote the preserve of a parent in the big chair.”

Grzegorz Stanisz of Samsung tempered that the TV remote was here to stay for now, but it needed “a convergent approach…one remote to rule them all” pointing to the recently unveiled Samsung Smart Control – one remote which can control multiple devices – as an example of this.

Despite the “unreal” growth of on-demand content, consumer electronics expert Simon Bryant believes some traditional TV habits will remain – at least for now; “linear is here to stay, primarily as a relaxing experience” he said.

TV and the New Home Ecosystem

Next, the panellists turned to the home of the future and how smart, more beautiful TVs will fit into all our lives. In the future, Simon Mills of Wallpaper* expects televisions to become an integral part of how our homes are designed, stating; “architects will start integrating viewing tech into buildings from the start so they can function wirelessly and technologically…and work aesthetically.”

All panelists agreed that consumers are becoming much more design savvy, a reason why Grzegorz Stanisz of Samsung firmly believes “TVs need to look good not only from the front but also from the back and sides- from 360 degrees.”

Exploring the impact of the Internet of Things, Simon Mills was certain that increased connectivity will cement the television’s place at the centre of the home: “The TV will become a hub. There could even be applications for when we’re not even watching it, such as light patterns to help us sleep or wake.”

A 2015 independent study, commissioned by Samsung, proved that UHD was 38% more immersive than HD content. Asked where we go beyond UHD, Grzegorz Stanisz said: “We are one step away from creating a lifelike experience in everyone’s home.”

Moving on to what this means for content creators, Tim Webber said creative studios such as Framestore “are working at the high end [of content production], and the increase in resolution, and increase in dynamic range means televisions are coming up to match.”

As overall Visual Effects Supervisor on Gravity, Tim admitted he found it “painful to see people watching some films on the back of an airplane seat.”

VR continues to gather pace in 2016, and the technology had a strong presence at the Samsung European Forum. Asked about the market potential of VR, Simon Bryant of Futuresource was positive: “VR is a huge growth market, we estimate around 70m head-mounted units selling annually by 2020, VR will be worth around $16billion including content and hardware. The growth over the next few years will be staggering.”

New hardware needs fresh content, and Framestore have already created a virtual reality companion experience for HBO’s Game of Thrones: “VR is a no-brainer for dramatic content”, says Tim Webber. “You are building a world that goes way beyond telling a story. I see VR enhancing the role of the TV”

Cinema and the Not-So-Small Screen

As average television screen sizes grow throughout Europe, questions were raised about how cinema, and home entertainment will relate to one another. Tim Webber said “the quality of screens and sound is now up there with cinema. The lines are blurring but they will always be two different experiences.”

Simon Bryant, backed this up with market insight from across Europe: “Small screen sales are falling, being replaced by tablets and mobile devices. While this is happening the primary screen is getting bigger and bigger.”

Commenting after the panel, Michael Zoeller, VP European Head of Visual Display, Samsung said: “Samsung has spent the last decade leading the television market and we are constantly driving for meaningful innovation for our consumers. For example, the SUHD televisions we unveiled at CES 2016 are already redefining the home entertainment experience with innovations like quantum dot display, bezel-less design, and IoT ready hub technology.”

“We brought together this panel to explore what the future means for television and some of the insights our panellists considered were fascinating. I’m hoping we can bring them all back in 2026 to see how their predictions stack up”.