Samsung Electronics has settled into the number 1 spot as the leading brand for side-by-side refrigerators worldwide in 2010. Ever since its first launch 15 years ago, Samsung sold more than 10 million refrigerators in over 130 countries. 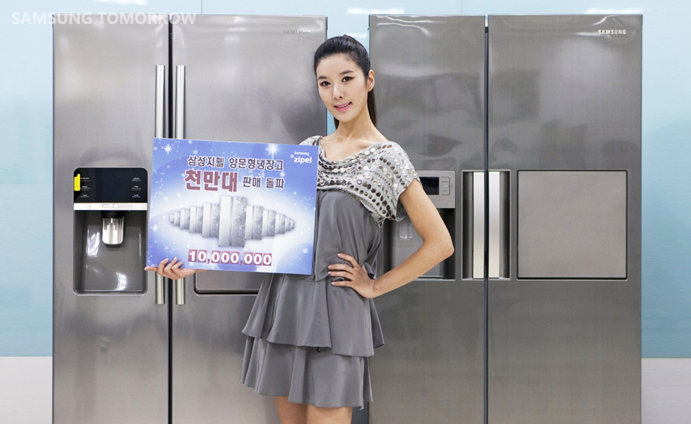 The side by side domestic refrigerator market in Korea used to be led by foreign brands such as GE and Whirlpool. But a quick shift took place right after Samsung introduced its new line of side-by-side refrigerators. Only 1 year after the first release of Zipel in 1997, Samsung Electronics had sold 2,500 units per month (4 times more than the foreign brands) and had achieved the number 1 market position in the” large refrigerators” sector of  the domestic market.

Outside of Korea, Samsung refrigerators were first exported to the UK in 1999. As it became more popular, they were shipped to more countries. Samsung refrigerators recorded 20% yearly increases in sales growth within the European market, and reached number 1 sales in 9 different countries (including the UK and Germany) in 2002.

In 2005, Samsung Electronics released the world’s first refrigerator with four separate compartments, the ‘Samsung Quatro Freedom’ rose to the number 1 position in the global market.. 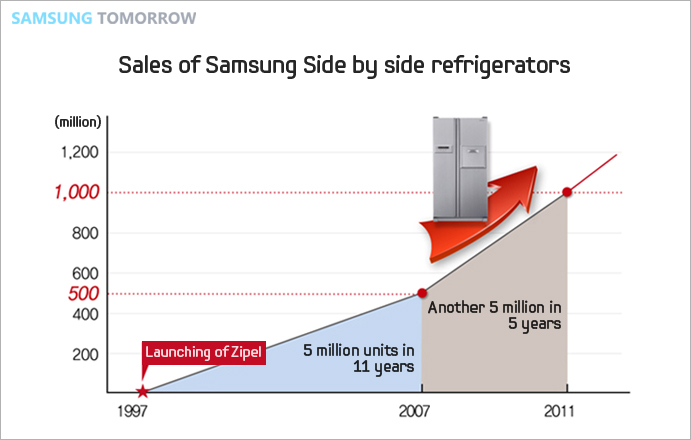 Between 1999 and 2007, Samsung refrigerators reached record sales of 5 million units, and continued to lead the market by selling 5 million more units in the next 5 years, almost doubling its speed of sales.

By the end of 2010, Samsung had maintained number 1 sales ranking within the Korean market for 13 consecutive years and established itself as a leading powerhouse in the global refrigerator market.

Samsung Electronics has constantly raised the competitiveness of its refrigerators by continuously revolutionizing the technology, design, and usability of the dual-door refrigerator for the past 15 years. For the sixth consecutive year, JD Power and Associates ranked Samsung refrigerators #1 in consumer satisfaction. Below are 3 key success factors.

The Twin Cooling System™, first developed by Samsung Electronics, incorporates separate cooling devices for the fridge and freezer. In other words, airflows are separated between the fridge and the freezer.

This way, your freezer stays drier, preventing frost, while the humiditiy of the refrigerator is kept around an ideal 75% (7 times higher that of conventional refrigerators), which allows for fresh storage of fruits and vegetables for over 2 weeks. This is also or effective as it cools its compartments faster, and more energy efficient. Furthermore, this system has an advantage of preventing the smell of foods from the fridge getting into to the freezer, so ice and frozen foods can stay free of unwanted odors.

This technology was evolved into the Quatro Cooling System™. Select models feature four separate compartments, Freezer, Refrigerator, Artic Select and Fresh Select. Time magazine named this as one of the “Cool Must-Have Gadgets” under the cover story “What’s Next.” This product also received a CES 2006 Innovation Design and Engineering Award, and an International Red Dot Design Award. 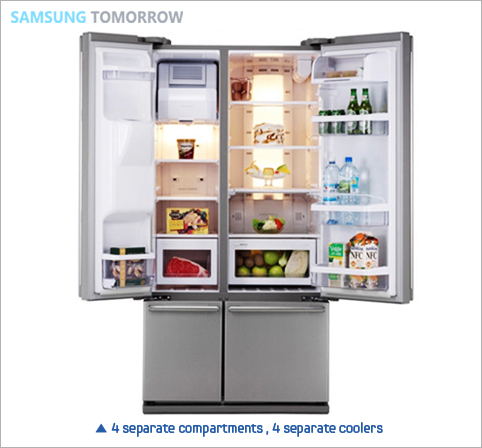 More innovations include the FlexZone™ Drawer that allows you to customize temperature settings within a drawer, the Silver Nano Health System™ that applies a silver nano coating that has an anti-bacterial effect and more.

Success Factor #2. From appliance to art 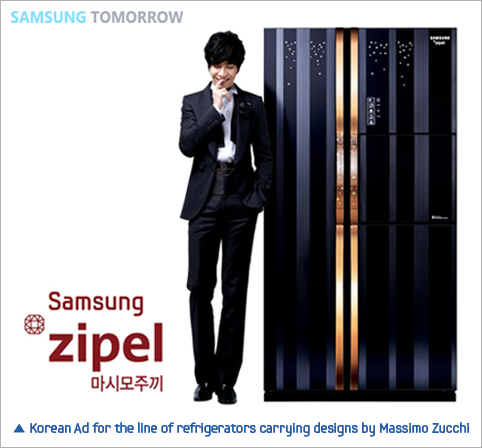 In 2001, Samsung Electronics introduced the concept of “interior design appliances” which raised the level of quality in kitchen appliances. A number of designs and patterns were developed to match the taste of customers.

In 2010, Samsung Electronics fused art with industrial design by incorporating the talent of the famous Italian jewelry designer Massimo Zucchi. It resulted in a stylish exterior appearance with a “Massimo Zucchi” aesthetic.

To increase sales in the global market, Samsung refrigerators have been designed and developed to reflect local food cultures. For the European market, where wine consumption is more common, the wine shelf was added to the refrigerator. For the refrigerators being sold in the US, space-efficiency was emphasized with the consideration of various foods that take up large spaces. The refrigerator was also made available in stainless steel, one of the hottest trends in American appliance design.

In Korea, there are separate refrigerators designated for Kimchi and designs have also been updated according to Korean trends. ‘Twin home bar’ products (featuring water and ice dispensers) were introduced in 2004 scoring big hits. In 2008, “well-being” trends were met by adding a vegetable compartment that reduced any remaining pesticides on fruits and vegetables by up to 72% by using UV LED waves. 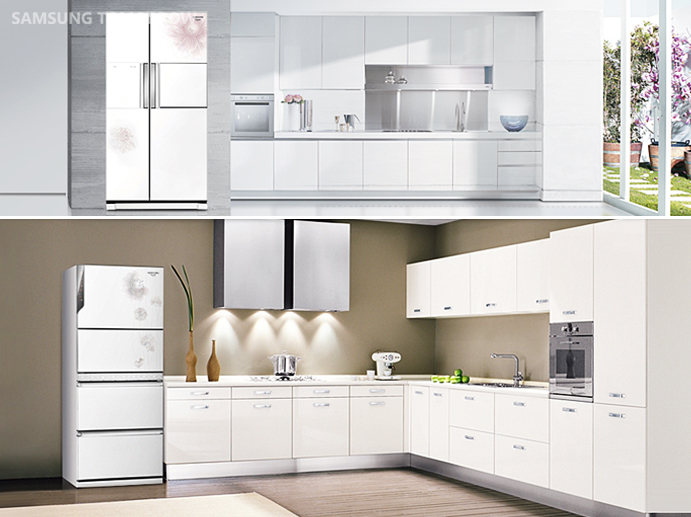 “The Samsung side by side refrigerator which has been continuously incorporating luxurious and elegant lifestyle, had achieved unprecedented sales of 10 million units. The innovation will not stop so that our products may add value to our customers’ life and continue to hold up the reputaion of being a luxury brand.

Samsung has been constantly transforming to reflect the changes of the times and demands of the consumers. Though many people tend to overlook it, Home Appliances is not an exception.