Each year, Samsung Electronics’ AI Forum brings together experts from all over the world to discuss the latest advancements in artificial intelligence (AI) and share ideas on the next directions for the development of these technologies.

This November 2 and 3, experts, researchers and interested viewers alike convened virtually to share the latest developments in AI research and discussed some of the most pressing and relevant issues facing AI research today.

Making the Best Use of AI in a Rapidly Changing World

AI technologies have developed remarkably in recent years, thanks in no small part to the hard work and diverse research projects being done by academic and corporate researchers alike all around the world. But given the rapid and significant changes brought on by the recent global pandemic, attention has recently been turning to how AI can be used to help solve real-life problems, and what methods might be most effective in order to create such solutions. 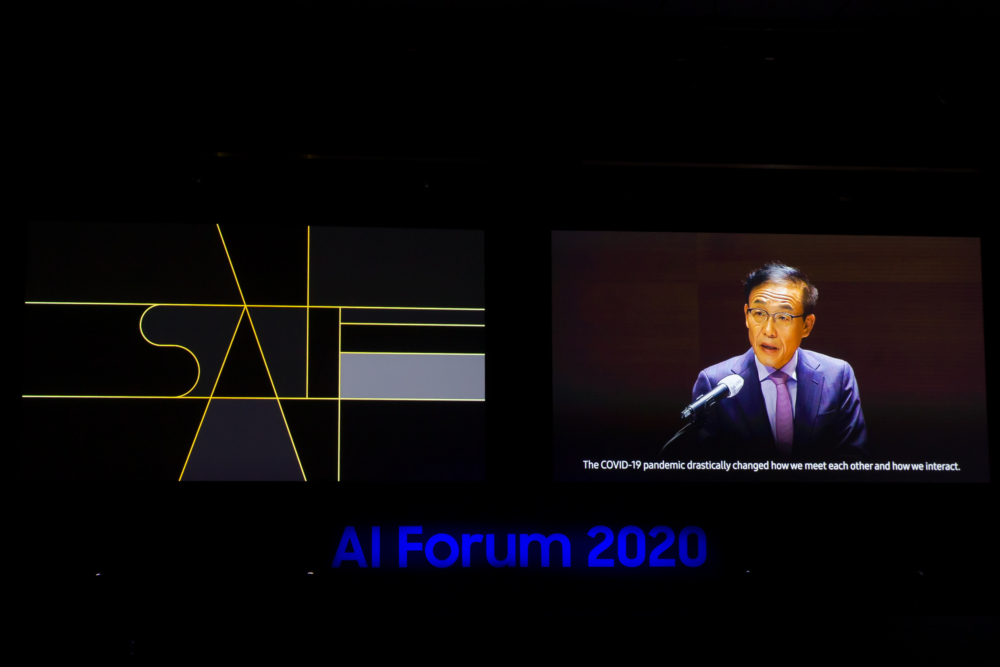 The first day of the forum, organized by the Samsung Advanced Institute of Technology (SAIT), was opened with a keynote speech by Dr. Kinam Kim, Vice Chairman and CEO of Device Solutions at Samsung Electronics, who acknowledged the importance of the discussions set to take place at this year’s AI Forum around the past, present and future of the role of AI. Dr. Kim also affirmed Samsung Electronics’ dedication to working with global researchers in order to develop products and services with meaningful real-world impact.

The first day of the Forum then continued with a series of fascinating invited talks given by several global leading academics and professionals. Professor Yoshua Bengio of University of Montreal, Professor Yann LeCun of New York University and Professor Chelsea Finn of Stanford University were the first three to present, following which the Samsung AI Researcher of the Year awards were presented. After this ceremony, SAIT Fellow Professor Donhee Ham of Harvard University, Dr. Tara Sainath of Google Research and Dr. Jennifer Wortman Vaughan of Microsoft Research gave their talks.

Taking AI to the Next Phases of its Development

The first day’s invited talks were followed by a virtual live panel discussion, moderated by Young Sang Choi, Vice President of Samsung Electronics, and attended by Professor Bengio, Professor LeCun, Professor Finn, Dr. Sainath, Dr. Wortman Vaughan and Dr. Inyup Kang, President of Samsung Electronics’ System LSI business. “It is my great pleasure to join this Forum,” noted Dr. Kang. “I feel as if I am standing on the shoulders of giants.” 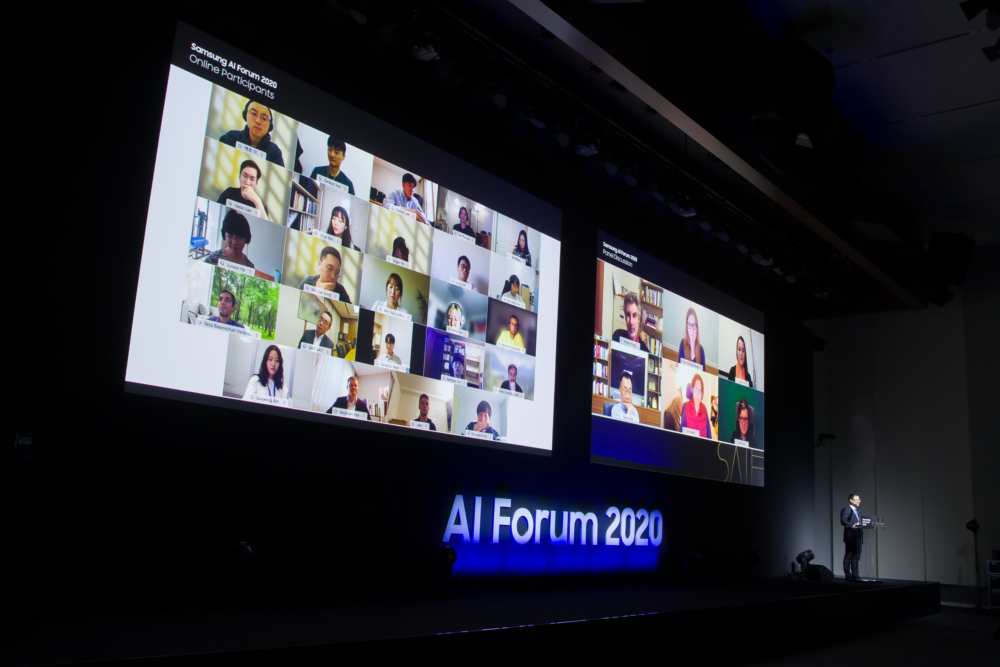 Questions were given to the panel that invited the experts to discuss the ways in which computational bottlenecks can be overcome in order to take AI systems to the next level and be developed to possess the same intelligibility as the human brain. The panelists weighed the benefits of scaling neural nets as opposed to searching for new algorithms, with Dr. Kang noting that, “We have to try both. Given the scale of human synapses, I doubt that we can achieve the human level of intelligibility using just current technologies. Eventually we will get there, but we definitely need new algorithms, too.”

Professor LeCun noted how AI research is not just constrained by current scaling methods. “We are missing some major pieces to being able to reach human-level intelligence, or even just animal-level intelligence,” he said, adding that perhaps, in the near future, we might be able to develop machines that can at least reach the scale of an animal such as a cat. Professor Finn concurred with Professor LeCun. “We still don’t even have the AI capabilities to make a bowl of cereal,” she noted. “Such basic things are still beyond what our current algorithms are capable of.”

Building on the topic of his invited talk, Professor Bengio added that, in order for future systems to have intelligence comparable to that of the way humans learn as children, a world model will need to be developed that is based on unsupervised learning. “Our models need to act like human babies in order to go after knowledge in an active way,” he explained. 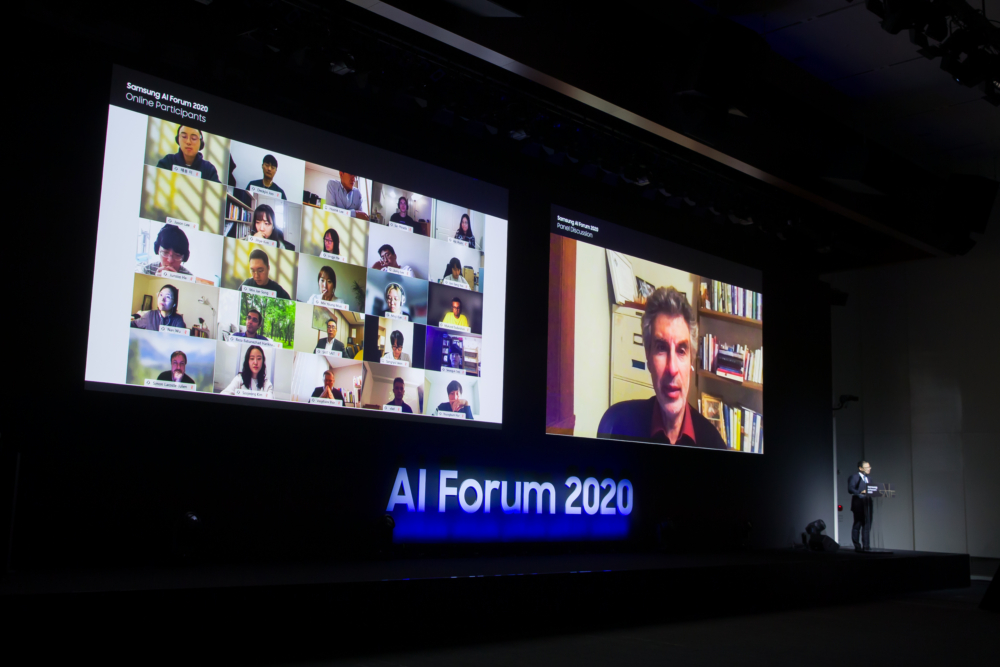 The panel discussion then moved on to the ways in which the community can bridge the gaps between current technologies and future, human-intelligence level technologies, with all the experts agreeing that there is still much work to be done in developing systems that mimic the way human synapses work. “A lot of current research directions are trying to address these gaps,” reassured Professor Bengio.

Next, the panel shared their thoughts on how to make AI ‘fairer’ given the inherent biases possessed by today’s societies, with the experts debating the balance that needs to be struck between systems development reform, institutional regulation and corporate interest. Dr. Wortman Vaughan made the case for introducing a diversity of viewpoints across all parts of the system building process. “I would like to see regulation around processes for people to follow when designing machine learning systems rather than trying to make everyone meet the same outcomes.”

The final question given to the panel asked for their thoughts on which field will be the next successful application area for end-to-end models. “End-to-end models changed the field of speech recognition by reducing latency and removing the need for internet connection,” noted Dr. Sainath. “Thanks to this breakthrough, going forward, you’re going to see applications of end-to-end models for such purposes as long meeting transcriptions. We always speak of having ‘one model to rule them all’, and this is a challenging and interesting research area that has been expanded by the possibilities of end-to-end models as we look to develop a model capable of recognizing all the languages in the world.”

The second day of the AI Forum 2020 was hosted by Samsung Research, the advanced R&D hub of Samsung Electronics that leads the development of future technologies for the company’s end-product business. 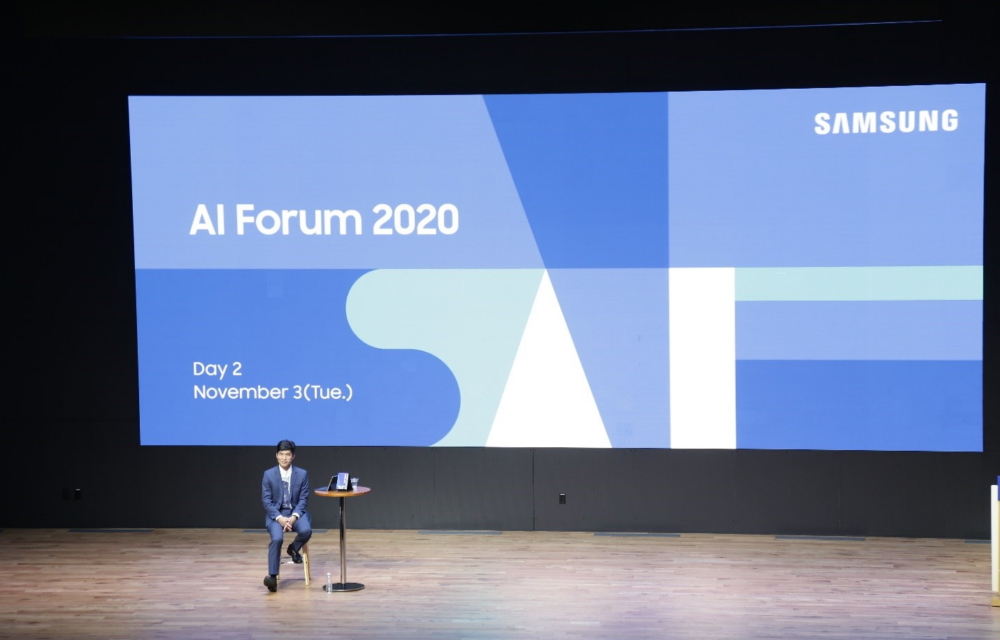 In his opening keynote speech, Dr. Sebastian Seung, President and Head of Samsung Research, outlined the areas in which Samsung has been accelerating its AI research to the end of providing real-world benefits to their users, including more traditional AI fields (vision and graphics, speech and language, robotics), on-device AI and the health and wellness field.

After showcasing a range of Samsung products bolstered with AI technologies, Dr. Seung affirmed that, in order to best extend the capabilities of AI to truly help people in meaningful ways, academic researchers and corporations need to come together to find best-practice solutions.

Putting the Future of AI into Perspective

Following Dr. Seung’s speech, the second day of the Forum proceeded with a series of invited talks around the theme of ‘Human-Centric AI’ by Professor Christopher Manning of Stanford University, Professor Devi Parikh of the Georgia Institute of Technology, Professor Subbarao Kambhampati of Arizona State University and Executive Vice President of Samsung Research Daniel D. Lee, Head of Samsung’s AI Center in New York and Professor at Cornell Tech.

Dr. Seung then posed a much-requested viewer question to the panel. Given that one of the most practical concerns in AI research is the obtaining of data, the experts were asked whether they believe that companies or academic researchers need to develop new means of handling and managing data. Acknowledging that academics often struggle to secure data while companies possess alleviated data shortage problems yet elevated restraints around the usage of their data, Professor Parikh made a case for the need of new research methods that can be modeled with insufficient data or with cooperation between academia and industry, including open research methods. “In many areas, there are big public data sets available,” she noted. “Researchers outside of companies are able to access and use these. But further to this, some of the most interesting fields in AI today are the ones where we don’t have much data – these represent some of the most cutting-edge problems and approaches.” 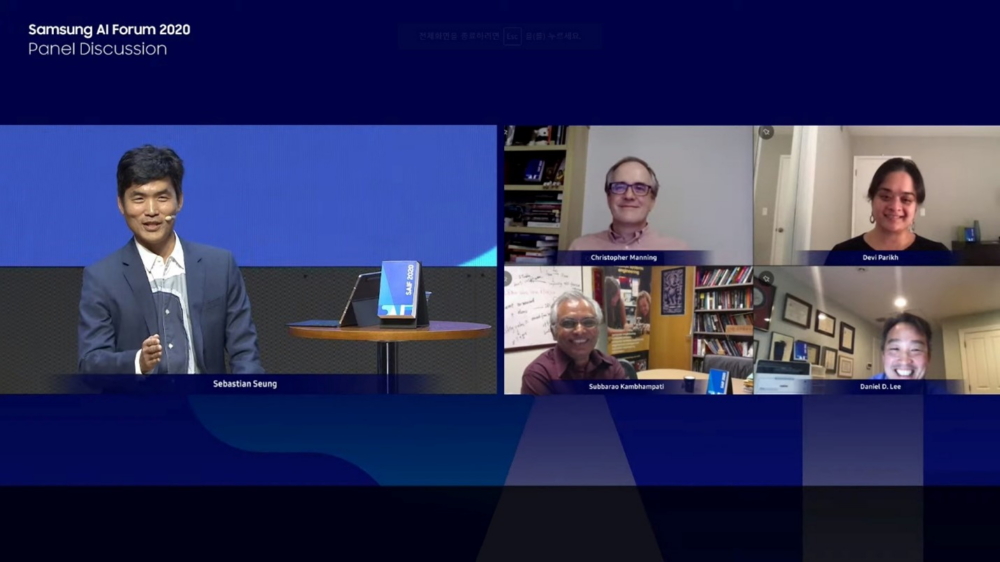 The final question took the panel back to the theme of the AI Forum’s second day, ‘Human-Centered AI’, wherein the panelists were asked whether or not they believe that AI will be capable of equaling human intelligence in the next 70 years, since that is the period of time it has taken us to get to where we are today in the field of AI research. EVP Lee reasoned that AI still has a way to go – but that 70 years is a long time. “I am optimistic,” noted EVP Lee, “but there are lots of hard problems in the way. We need to have academics and companies working on a goal like this together.”

“We are currently reaching the limits of the range of problems we can solve using just lots of data,” summarized Professor Manning. “Before we see AI developments like this on a large scale, an area that we should emphasize is the production of AI systems that work for regular people, not just huge corporations,” he concluded.

The Samsung AI Forum 2020 ended with a warm thanks to all the esteemed experts who had taken part in the two-day Forum and a shared hope to hold next year’s Forum offline. All the sessions and invited talks from the AI Forum 2020 are available to watch on the official Samsung YouTube channel.