From November 1–2, Samsung Electronics held its fifth Samsung AI Forum (SAIF) entirely online. The event brought world-renowned academics and AI experts together to discuss and establish research directions for developing AI that can be scaled to benefit humanity.

Speakers representing various fields introduced newly developed AI algorithms, as well as innovative AI solutions that can benefit our lives in the future. Samsung Electronics livestreamed this year’s forum on its YouTube channel and offered participants – which included engineers, researchers and students in the field of AI – the opportunity to interact with experts during a Q&A session.

Read on for Samsung Newsroom’s recap of the presentations and key topics that took center stage during the two-day event. 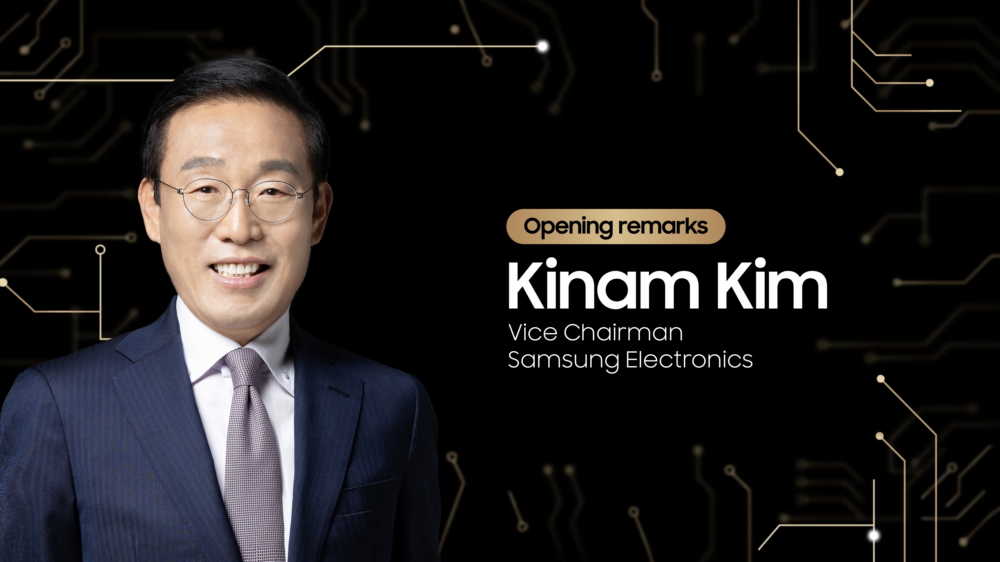 Hosted by the Samsung Advanced Institute of Technology (SAIT), Samsung’s R&D hub dedicated to cutting-edge future technologies, day one of the Samsung AI Forum began with opening remarks from Dr. Kinam Kim, Vice Chairman and CEO of Samsung Electronics. “Digital transformation has been accelerated in every industry, to which data science and machine learning are essential,” said Dr. Kim. “We at Samsung are open to discussing how to tackle important, common problems with researchers from all over the world, and we hope that the Samsung AI Forum can help facilitate that goal.” 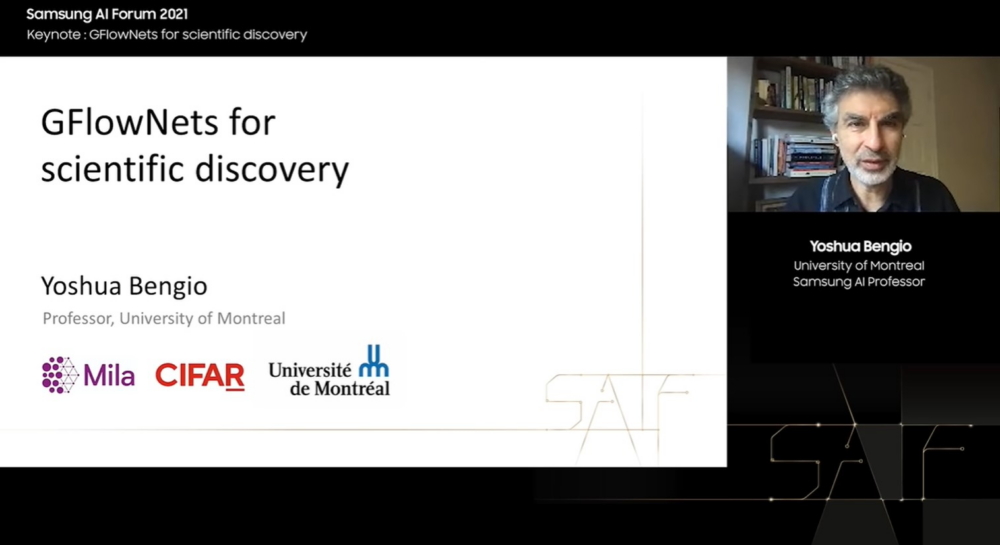 This was followed by a keynote speech from Professor Yoshua Bengio of the University of Montreal, the co-chair of the Samsung AI Forum and a Samsung AI Professor. During his speech, Professor Bengio introduced a new machine learning tool called GFlowNets.

After explaining how the algorithms could be applied to the development of new drugs, he emphasized how “We find that [the model] converges to good solutions faster than other methods, and in addition, it finds a more diverse set of solutions. So this is very encouraging, and we are very excited about the potential applications in discovery in general.” After finishing his speech, the professor discussed ways to apply the algorithms during a Q&A session that featured scientists from around the world.

The keynote was followed by three technology sessions entitled “Scalable & Sustainable AI Computing”, “AI for Scientific Discovery” and “Trustworthy Computer Vision”. During these sessions, leading academics and startups spoke alongside some of Samsung’s top researchers.

Professors Kunle Olukotun of Stanford University, Gerbrand Ceder of the University of California – Berkeley and Antonio Torralba of the Massachusetts Institute of Technology shared key findings in their respective areas of AI research. Founders of startups based in Silicon Valley, including Andrew Feldman, CEO of Cerebras Systems, Bryce Meredig, CSO of Citrine Informatics and Daniel Bibireata, Vice President of Landing AI, presented insights on business models for various areas of AI research, as well as future business strategies. Representing Samsung were multiple leading researchers, including Changkyu Choi, Senior Vice President and Head of SAIT’s AI & SW Research Center, who introduced the company’s vision for AI and summarized the progress it has made through its research in the field. 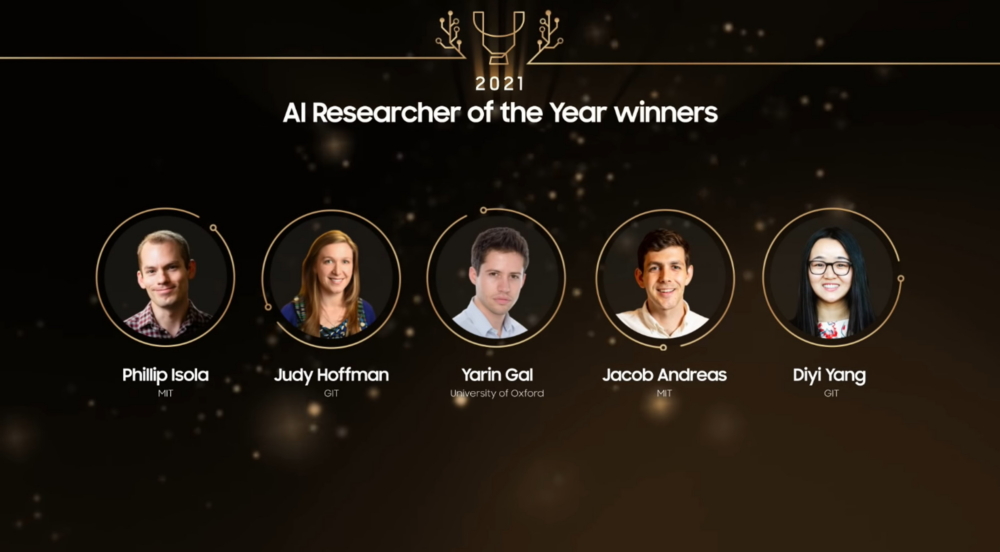 The event also showcased rising talents and researchers in the field of AI. Samsung revealed this year’s five winners of the Samsung AI Researcher of the Year award, which was launched last year to recognize promising global AI researchers.

“I’m especially thankful to my students, whose work is really what’s being rewarded here,” said Professor Phillip Isola of the Massachusetts Institute of Technology, who received the award. “We’re trying to make progress to make AI systems that are closer to [reaching] human-like [and] animal-like abilities,” he added, describing natural intelligence.

“My research lies at the intersection of computer vision and machine learning, and my overall goal is to create vision systems that are reliable and accessible for everyone,” added Professor Judy Hoffman of the Georgia Institute of Technology.

For the Coexistence of Humans and AI

Day one of the forum closed with a panel discussion in which academics engaged in lively conversations and shared their insights. The panel’s moderator, Youngsang Choi, Vice President of SAIT, introduced topics related to each panelist’s area of expertise. After the discussion, participants were given free rein to ask the panelists questions. 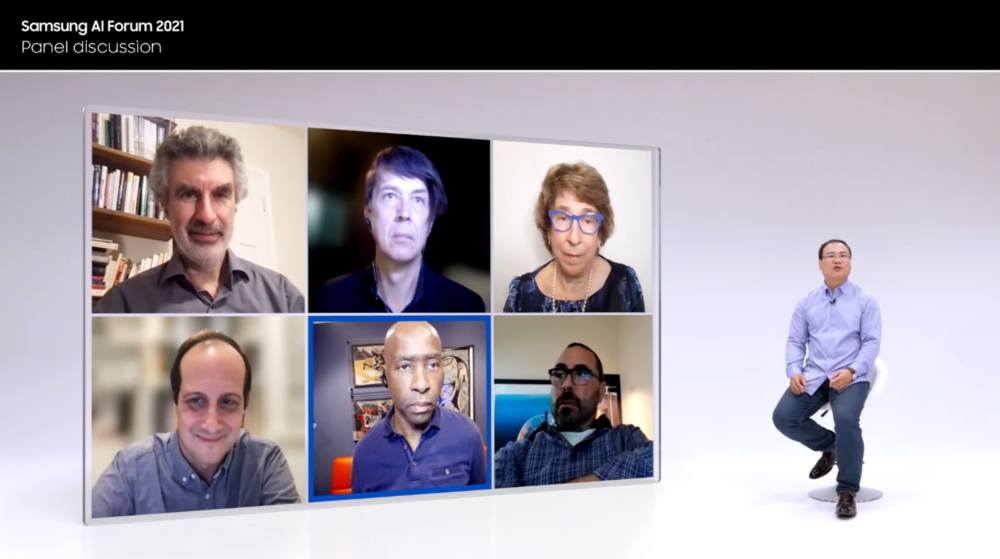 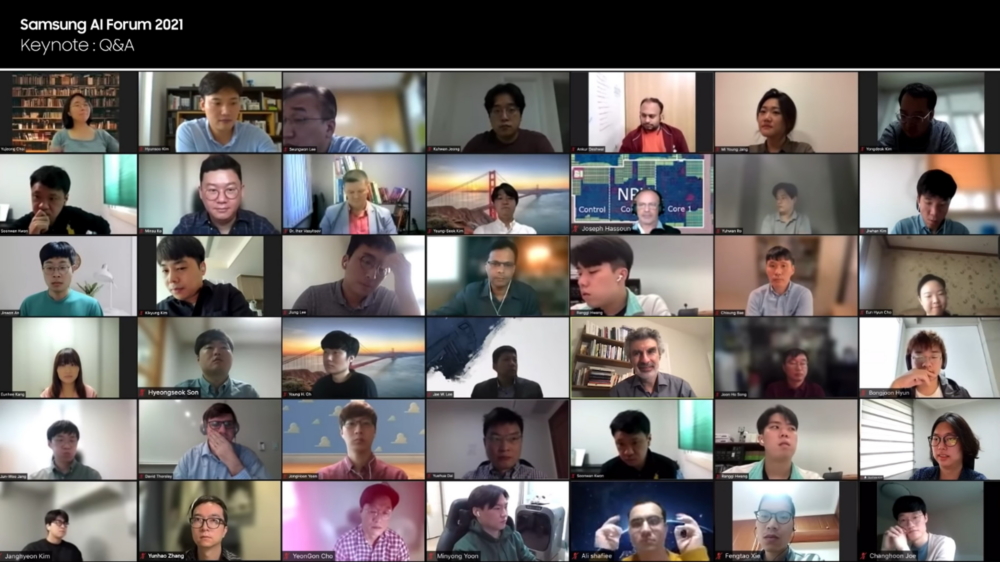 One participant asked the panelists if they believed that it would be possible for AI algorithms to achieve human-level data efficiency in training, to which Professor Antonio Torralba said yes.

“When we think about the data that humans have, it’s not just visual data. They really sense the world through a lot of different mechanisms,” Professor Torralba explained. “Also, humans actually are not passive observers of the world. They are actually interacting with the world and performing all kinds of experiments. I think, in order to achieve [a human-like] level of efficiency, we need to incorporate all of these things and make them really like the main characters of the movie that AI is playing now.”

The panel discussion also offered an opportunity for students majoring in AI-related fields to share their concerns with the experts and receive advice. In the field of AI natural language processing (NLP), for example, the number of parameters is continuously increasing, which means that the costs required to train a model are too. Considering these circumstances, participants discussed which way academic research should be heading.

Professor Bengio concluded the panel discussion by offering some insightful advice to young AI researchers and students. “Don’t be afraid to go in directions that are very different from what has been established as state of the art,” said the professor. “Brain power is the thing that’s really behind innovation and [the] amazing progress that science brings us. So don’t be afraid to try things [and] don’t be afraid to question what has been apparently established for years or decades. That’s how we are all going to make progress.”

The Latest AI Research, All in One Place

Day two of the forum was hosted by Samsung Research, Samsung Electronics’ advanced R&D hub, which leads the development of future technologies for its Consumer Electronics and IT & Mobile Communications divisions. Dr. Sebastian Seung, President and Head of Samsung Research, emphasized that “AI is a technology that makes people’s lives better,” and offered an overview of the various AI-related projects that Samsung Research was engaged in, including those related to smartphone cameras, on-device AI, Open Source AI System Software, Machine Translation, and AI technologies for robots. “I’m really looking forward to today’s lectures by leading researchers in AI,” said Dr. Seung, heightening viewers’ expectations.

The day began with a keynote from Professor Leslie Valiant of Harvard University, who offered details on how to augment supervised learning with reasoning. “To make AI work, it takes several components,” Professor Valiant explained. “The first component is identifying which phenomenon or functionality you want to realize.”

Next came lectures delivered by academics who have been actively leading AI research. These include Professor Felix Heide of Princeton University, Research Scientist Been Kim of Google Brain and Professor Max Welling, a research chair in machine learning at the University of Amsterdam and a Distinguished Scientist at Microsoft Research.

AI’s Evolution Into a Tool for Gaining Insights

“The first time AI came into presence, there was a lot of emphasis at that time on logical reasoning,” Dr. Lee explained. “But now, data-driven approaches such as deep neural networks are rising. And what we just heard from Leslie’s talk was [about] how we can actually use the logic [now] in combination with these more advanced neural network techniques. What would be the big advantage of doing that kind of return, in some sense, to logic with neural networks?”

“The idea that both learning and logic are important has been understood for a long time, [albeit separately],” Professor Valiant explained. “We are in a good position because I think the position of learning is now very much advanced. So, we have reason to be confident that there’s a lot of competence that we have as far as learning, and it’s a good basis on which to build logic.”

Researcher Efi Tsamoura of the Samsung AI Center in Cambridge added that “An increasing number of applications for many different areas, from computer vision to natural language processing, are taking advantage of background knowledge in order to build more robust and simpler models. Why is that? It’s because logic provides us with the ability to [complement] missing labels and to use the missing labels in order to train the model.” Tsamoura also pointed out that “An increasing number of researchers from different fields, mostly applied fields, are realizing the potential of logic.”

The discussion also touched on scientific discoveries that have been made with machine learning. “I think it’s worth noting that with the advent of 5G and with 6G coming down the pipe, communication networks have gone from being extremely complicated to super-extremely complicated… and I think the opportunities to optimize and manage the systems to make them even more efficient are vast. So I think there is a great chance to bring machine learning and AI tools to bear on the structure and operation of these communication networks to make them more efficient,” said Gregory Dudek, Head of the Samsung AI Center in Montreal. “We’ve had some very nice success in Montreal in adapting the tools that exist to these relatively new problems for that domain, and [have] actually significantly moved the needle to increase the performance of these systems.”

In order to commercialize machine learning for use in various areas, continuous simulations must be conducted. How then can the gap between simulation results and real-world phenomena be narrowed? Professor Welling shared his thoughts: “[Since simulations do not actually reflect all the complexities of the world,] I think probably the solution is some hybrid solution where you would simulate as much as you can, but you also identify where your system is uncertain about its predictions. And at that point, sort of in an active sense, you are then going to acquire data for that particular problem. So, active sensing might be an interesting solution.”

At the Lightning Talks session, employees from Samsung Research’s Global AI Centers presented some of their latest research including Adaptive Sharpness-Aware Minimization(ASAM), which is a deep learning optimizer developed by Samsung Research, and Named Entity Correction for Automatic Speech Recognition (ASR).

The thoughts and findings that were shared at the Samsung AI Forum indicate that a world in which AI is merged seamlessly with our daily lives may not be that far off. Full replays of both days of the Samsung AI Forum 2021, through which viewers can learn more about the current status of AI technology, its applications, and what the future may hold, can be viewed on the event’s official website and on Samsung Electronics’ YouTube channel.