Samsung and UNICEF Unite to Improve Schools in Brazil

“Trajetórias de Sucesso Escolar” is a project that unites Samsung, UNICEF, and NGO Cidade Escola Aprendiz in their common goal to improve education across Brazil 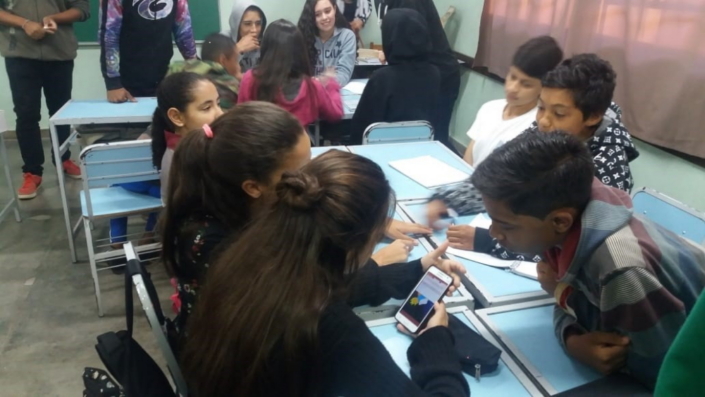 Students in Brazil chatting and engaging with technology

In Brazil, age-grade distortion is an emerging problem for schools. More than 7 million children and adolescents are currently behind in their schooling by two or more years, according to the 2017 School Census. These boys and girls have fallen behind for a multitude of reasons, but significant numbers are required to repeat academic years because they have dropped out, fallen behind, or were otherwise unable to progress in their studies. The “Trajetórias de Sucesso Escolar” (“Successful School Trajectories”) program was launched by UNICEF, in partnership with Samsung and NGO Cidade Escola Aprendiz, to provide data on this situation and offer solutions.

Regional data about age-grade distortion can be found on the platform http://trajetoriaescolar.org.br/, which provides statistics detailing the geographical spread and prevalence of age-grade distortion. The tool also provides surveys in the hope that people will be encouraged to share information such as race, gender and age profiles, among other details. By publishing this data, the project aims to shed light on the situation and thus face the challenge of age-grade distortion by creating policies that are tailored to specific states and municipalities.

The aim is to use the results from the platform to implement initiatives that are flexible and can be adapted to individual students, schools and regions. It is hoped that these initiatives will re-integrate the students into the school community and reduce the likelihood of truancy and failure.

UNICEF asserts that getting to know students is critical to ensuring that public policies are both efficient and effective. Samsung supports this mission and believe that the company can play a role in improving schooling across Brazil through the use of technology.

“We believe that the development of Brazilian education is a task for all members of society to overcome. Therefore, Samsung strives to collaborate and actively participate in improving the learning process for all students,” says Isabel Costa, Corporate Citizenship Manager at Samsung Brazil.

Samsung’s desire to encourage learning is key to their involvement in the initiative in Brazil. The company collaborated with UNICEF to discuss the future of the initiative at the “Promoção de Trajetórias de Sucesso Escolar” (“Promoting Successful School Trajectories”), a seminar held in Brazil last August that discussed the findings of a recent study conducted by Inep (“National Institute of Studies and Educational Research Anísio Teixeira”*).

In addition to the “Trajetórias de Sucesso Escolar” project, Samsung has also committed itself to the “Maratona UNICEF Samsung” (“UNICEF-Samsung Marathon”), which is a programming and technology strategy to create educational applications that will help to encourage students in their studies and reduce age-grade distortion in Brazil. The project is being carried out in partnership with Softex (Association for the Promotion of Excellence in Brazilian Software) and will be implemented as part of the “Brasil Mais TI” program.

The UNICEF-Samsung Marathon’s final phase will start this month. There will be a presentation of 31 selected projects that have brought together students, programmers, designers, developers, teachers and inventors to create app prototypes for Languages, Mathematics, Natural Sciences and Human Sciences. These apps will be used to inspire students in grades 6–9 of elementary school.

Samsung is involved in the development of the apps in a number of capacities, including project mentoring and offering specialist support and knowledge. UNICEF and its partners are responsible for providing education support to the participating teams.

Samsung is a world leader in the field of technology, offering a range of products that help people challenge their limits and overcome obstacles so that they can achieve their dreams and life goals. Samsung is committed to innovation and is constantly investing in research and development so that they can offer their users the very best that technology can provide.

People are the main focus of the brand and for this reason Samsung offers a range of exclusive services, benefits, and experiences for customers through Samsung Care and Samsung Club. Communities can also benefit from Samsung Social, a sponsorship program that was designed to promote projects that create a more inclusive and sustainable world.