Samsung Electronics announced that it has successfully developed the world’s first adaptive array transceiver technology operating in the millimeter-wave Ka bands for cellular communications. The new technology sits at the core of 5G mobile communications system and will provide data transmission up to several hundred times faster than current 4G networks. 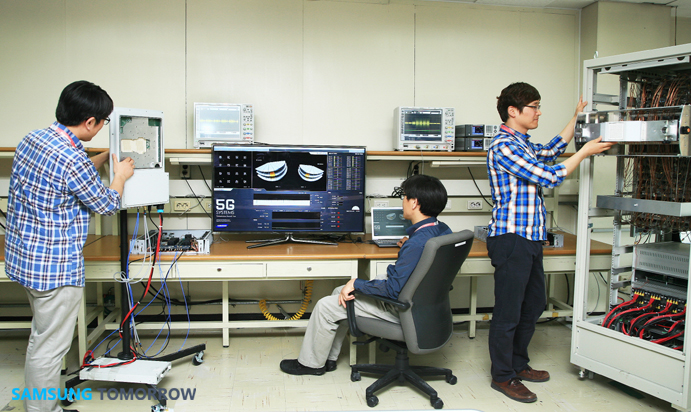 5G mobile communications technology is the next generation of the existing 4G Long Term Evolution (LTE) network technology. 5G will be capable of providing a ubiquitous Gbps experience to subscribers anywhere and offers data transmission speeds of up to several tens of Gbps per base station.

The implementation of a high-speed 5G cellular network requires a broad band of frequencies, much like an increased water flow requires a wider pipe. While it was a recognized option, it has been long believed that the millimeter-wave bands had limitations in transmitting data over long distances due to its unfavorable propagation characteristics.

However, Samsung’s new adaptive array transceiver technology has proved itself as a successful solution. It transmits data in the millimeter-wave band at a frequency of 28 GHz at a speed of up to 1.056 Gbps to a distance of up to 2 kilometers. The adaptive array transceiver technology, using 64 antenna elements, can be a viable solution for overcoming the radio propagation loss at millimeter-wave bands, much higher than the conventional frequency bands ranging from several hundred MHz to several GHz.

Samsung plans to accelerate the research and development of 5G mobile communications technologies, including adaptive array transceiver at the millimeter-wave bands, to commercialize those technologies by 2020.

Samsung’s latest innovation is expected to invigorate research into 5G cellular communications across the world; the company believes it will trigger the creation of international alliances and the timely commercialization of related mobile broadband services.

The competition for technology leadership in next-generation mobile communications development is getting increasingly fierce. China established a government-led “IMT-2020 (5G) Promotion Group” for 5G research in February 2012, while the European Commission also plans to invest 50 million Euros in 2013 to bring 5G services to the market by 2020.

Once commercialized, 5G mobile communications technology will be capable of ultra-high-speed data transmission up to several hundred times faster than even the 4G LTE-Advanced technology due for launch later this year.

Samsung’s new technology will allow users to transmit massive data files including high quality digital movies practically without limitation. As a result, subscribers will be able to enjoy a wide range of services such as 3D movies and games, real-time streaming of ultra high-definition (UHD) content, and remote medical services.