Even when the weather seems nice, there can still be fine dust and particulates in the air that tickle our noses. These microscopic particles that pollute the air we breathe are culprits behind many respiratory health issues, including asthma, rhinitis and even the common cold. What if we just stayed inside?

In fact, many people believe that staying indoors solves the problem, but air inside the home may not be as clean as they think. According to the American Academy of Allergy, Asthma & Immunology, 50 percent of all illnesses are caused by or aggravated by polluted indoor air. Experts agree that using an air purifier to clean indoor air is an effective way to get “healthier air.”

Why Do We Need Air Purifiers?

Many of us take air for granted, especially inside our homes. But even there, the danger lurks. The International Agency for Research on Cancer, an agent of the World Health Organization, classifies particulate matter from air pollution as a “Group 1” carcinogen. These fine-grained carcinogens are so thin—thinner than one-thirtieth of a hair strand’s width—that they bypass our body’s defenses, including the fine hairs that line our airways, and enter our respiratory system.

So, Samsung teamed up with Stanford University to verify the positive effects of Samsung’s air purifiers on the quality of indoor air in 16 different households within the city of Fresno. Fresno had earlier received the dubious distinction of being declared the city with the highest level of particulate matter in the US by the American Lung Association. So residents there were understandably concerned.

Of the 16 households, nine installed Samsung’s air purifiers while seven did not. For 12 weeks, each household’s air quality was analyzed in five-minute intervals, and the results were surprising. As shown in the chart below, there were dramatic reductions in microparticles, dust mites, and even germs and bacteria.

“Any typical home or apartment could see reductions in indoor concentrations of airborne particles when using a highly efficient filter like the one used in the Samsung air purifier. The beneficial effects seen with the filtration system are broadly applicable to all populations across the globe.” said Prof. Kari Nadeau, a professor of pediatrics and medicine in Stanford University. 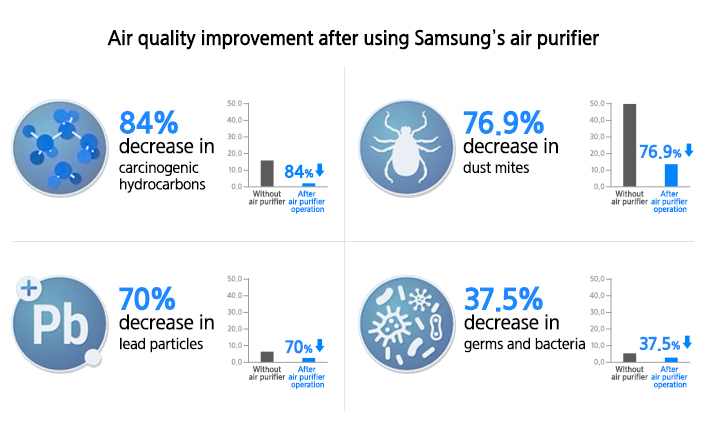 Not surprisingly, Samsung’s AX series is getting a lot of attention. It boasts a five-step purification system that captures up to 99 percent of even the finest microdust, as small as 0.02 micrometers, in the air. For illustration, that’s about 50,000 times smaller than a pencil point.

The pre-filter absorbs coarser particles in the air such as visible dust and pet hair. The second “E-Charger” releases static electricity, electrically charging ultrafine dust particles so that they are encouraged to float towards the filter. The third filter uses charcoal’s absorptive powers to eliminate bad odors and harmful gases like formaldehyde. The fourth, the PM2.5 Filter—the most intricate filter*—captures up to 99 percent of ultrafine particulates invisible to the naked eye.

Because the dust particles line up according to their electrical charge, allowing them to be efficiently collected together, there is less clogging and the filter life is extended up to two times. Virus Doctor completes the five-step purification system by reducing up to 99 percent of airborne microorganisms.

Samsung’s upgraded 2016 air purifiers also have several convenient features, such as its Air Intelligent Display that measures and displays levels of particulates in the air. This way, the user can easily recognize how clean the surrounding air is and monitor the state of operation.

Wi-fi control is another feature available on relevant models. In the same way that smart air conditioners can be turned on before the user comes home, the app allows users to control the connected air purifier anytime, anywhere. A real-time filter monitor shows, on the app, the right time to replace filters.

The AX7000 was designed for larger homes and offices around 90 square meters, the AX5000 for smaller spaces up to 60 square meters, and the AX3000 for individual rooms up to 40 square meters. To learn more about Samsung Electronics and the complete AX series lineup, please visit www.samsung.com.