A united front for the Internet of Things (IoT) presents at this year’s CES in Las Vegas thanks to the Open Connectivity Foundation (OCF), which is exhibiting at the booth #40930 in the Sands, Halls A (Smart Home Marketplace).

The organization’s theme for this year is ‘All Things Connected’. And as OCF brings together many of the industry’s major players, including Samsung, it showcases how devices from different manufacturers can work well together on a connected platform. The exhibition is being held in Las Vegas Sand Hall from 5th January to 8th January 2017.

Although a rapidly growing industry, IoT currently suffers from fragmentation. A wide range of standards stymie cross-sector collaboration, which in turn hinders the industry from establishing a unified legacy.

In theory, the billions of connected phones, computers, sensors, and other devices should be able to communicate with each other regardless of manufacturer, operating system and chipset. OCF was created to make that vision a reality. The organization is creating a specification and sponsoring an open source project called IoTivity to make IoT an all-compassing ‘internet of everything’. OCF already has over 300 members, many of which include household names such as Samsung Electronics. Cooperation on this scale will unlock a huge opportunity in the IoT market, and will help developers and companies create solutions that map to a single open specification and codes.

Putting the Platform into Action

At CES 2017, OCF’s exhibition demonstrates working examples of how a unified IoT platform can provide benefits to users as well as developers and manufacturers. Here, Samsung displays its own products as part of the OCF Kiosk Zone and Demo Zone. Samsung has its own kiosk and is showing products including its robot vacuum cleaner and Gear S3. Meanwhile, in the Demo Zone, Samsung products are being featured alongside other OCF member products in connected platform use cases.

Some might say that a robot vacuum cleaner is in itself a ground-breaking innovation, and indeed it is. But what if it could be controlled remotely from a smartwatch? At the Samsung Kiosk in the OCF exhibition booth, how Samsung Gear S3 can be used to turn the autonomous vacuum cleaner on or off and to change modes on the device is demonstrated. The vacuum is also able to send notifications to the smartwatch to communicate any issues it detects, such as its wheels being stuck.

A mock living room is set up in the OCF Demo Zone. At the living room, three different scenarios are demonstrated in which various devices can work in tandem as part of a smart home. The first two of these are Leaving Home Mode and Coming Home Mode. Here, a Gear or Windows 10 tablet is used to turn the TV on or off, change the volume and contents on TV as customized by the user, turn the robot vacuum and air conditioning on or off, and control the lights and temperature in accordance with practical experience in smart home. In Movie Mode, the same elements can be controlled to different parameters to create the perfect viewing experience – lights are dimmed, picture and sound setting of TV changes to Movie Mode, and air conditioning becomes wind-free.

But the smart home extends beyond the living room. In the garage that is recreated in the Demo Zone, a Gear S3 changes the settings of a car parked up inside – including its temperature. Also from inside the vehicle, mode of Family Hub 2.0 can be switched to Power Cool, Power Freeze and Ice-making Mode, realizing true convergence of smart home and connected car.

The smart home is just one of the ways that OCF will help bring about a more open IoT platform that benefits all. It will also be used in industrial, enterprise, healthcare and automotive settings. But the basic premise is the same throughout. A collaborative approach to IoT makes sense for all involved. Samsung’s work with OCF and partnership at CES 2017 is an important part of showing what a connected future could look like. 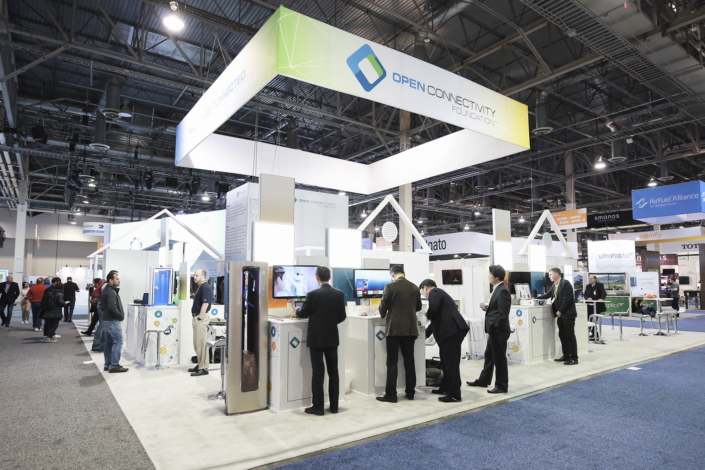 The goal of the Open Connectivity Foundation is to accelerate industry innovation in IoT by showcasing how devices from different manufacturers can work together on a connected platform. 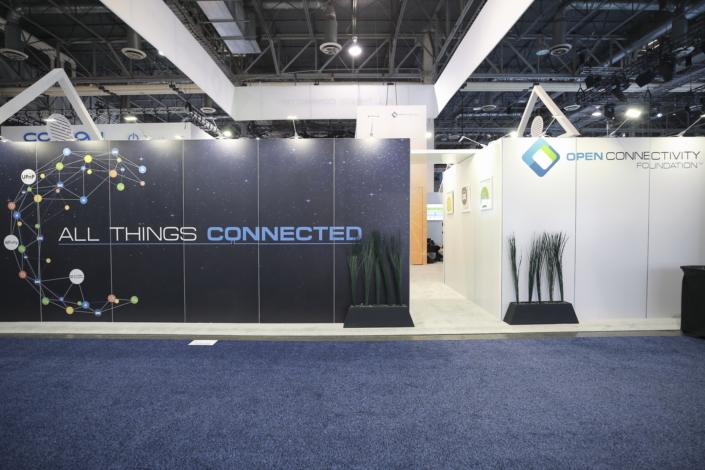 The OCF’s theme for this year is ‘All Things Connected’. 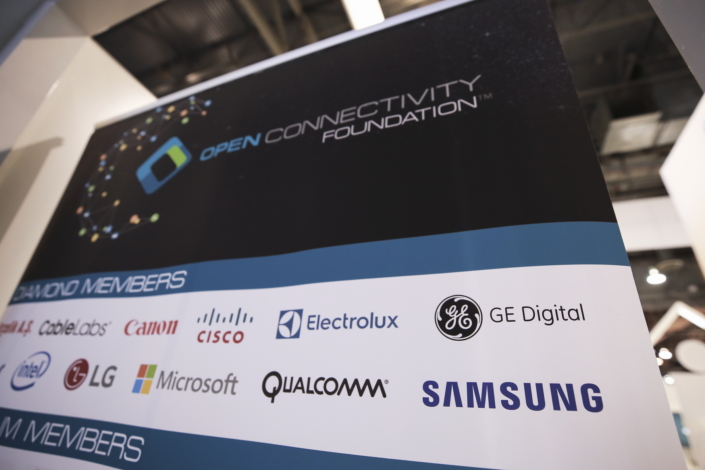 The OCF brings together many of the industry’s major players, including Samsung. 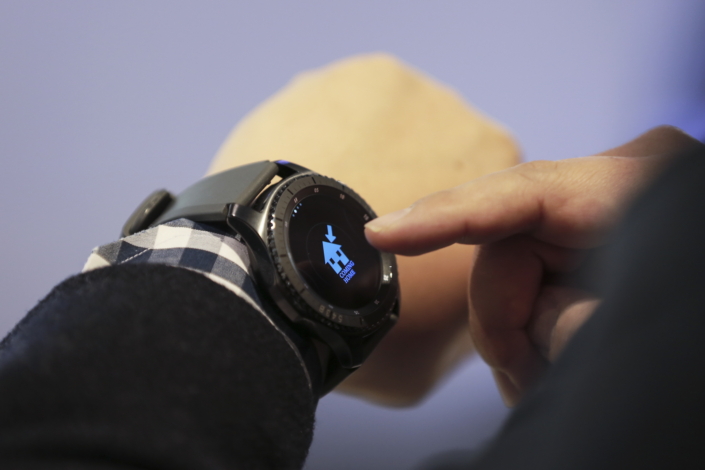 The Samsung products presented at the OCF’s CES 2017 booth illustrated how a variety of devices can work together to create a convenient and connected ‘smart’ home. 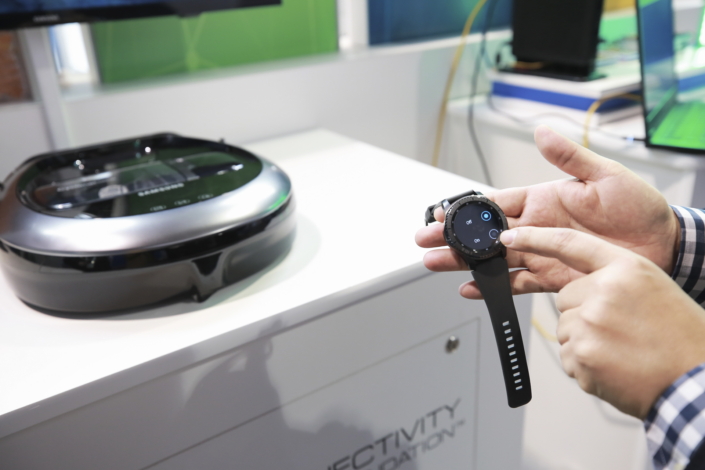 The exhibit included ‘connected’ living room and garage setups, and provided specific examples of how a unified IoT platform can benefit users as they go about their day. 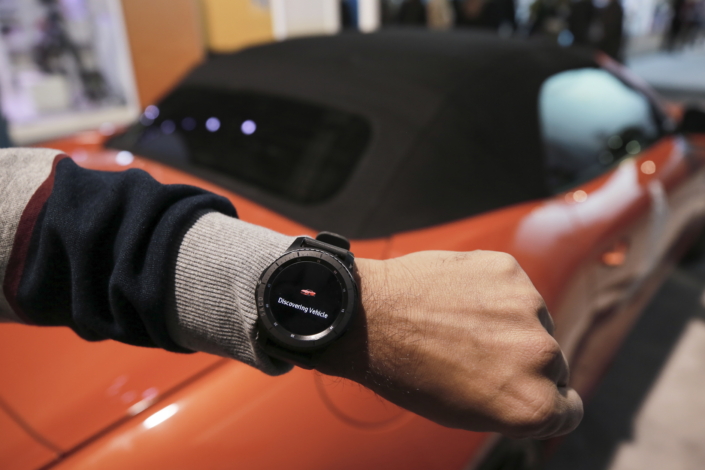 Both setups illustrated how connected devices could be set to conveniently automate everyday tasks. Here, Samsung’s Gear S3 is used to seamlessly adjust a thermostat and unlock and put the top down on a user’s convertible.

The Gear S3 was also used to control key functions on Samsung’s Family Hub refrigerator, allowing the user to adjust the refrigeration mode and alerting them when its door was ajar. 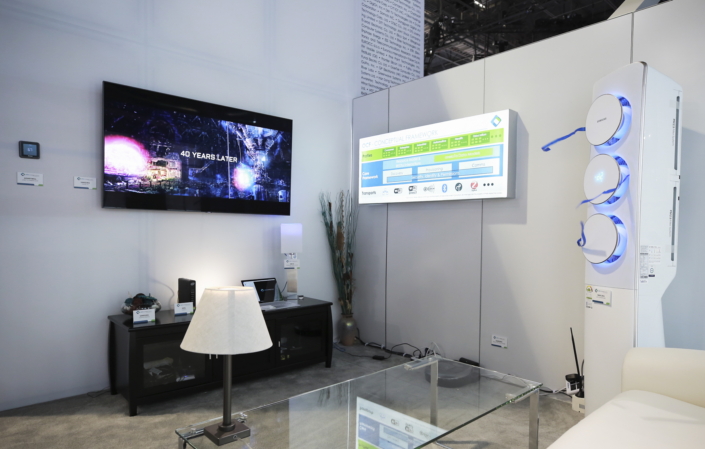 In the exhibit’s mock living room, a variety of electronics can be activated and powered off depending on whether the user was leaving, coming home or preparing to watch a movie.