Samsung Electronics today held its Annual General Meeting of Shareholders for the 2017 financial year in Seoul, attended by about 400 individual shareholders and institutional investors.

The agenda items included approval of the full-year financial statement, election of members to the Board of Directors and amendments to the articles of incorporation for a stock split, which was announced earlier this year.

“Samsung Electronics had an outstanding year in 2017 as we achieved record results despite an uncertain business environment,” Oh-Hyun Kwon, Chairman of the Board of Directors, said in his opening remarks. “In 2018, we are committed to delivering another successful year by taking on new challenges and building the foundation for mid- to long-term sustainable growth.” 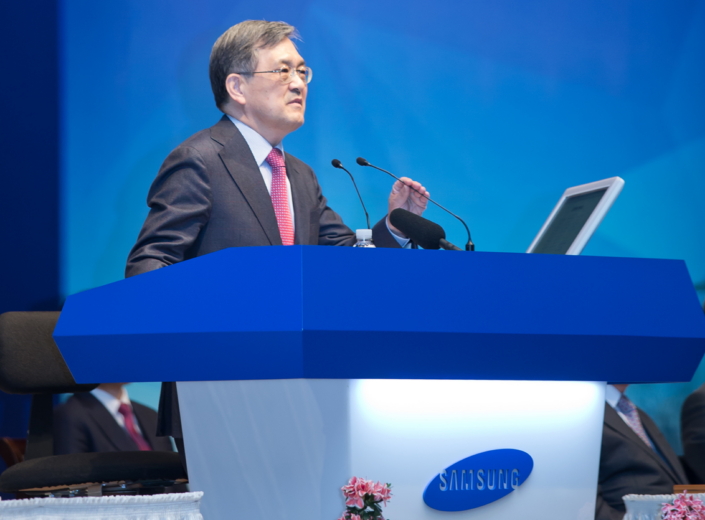 In 2017, the Company returned 9.2 trillion won to shareholders through share buybacks and cancellation and plans to pay out a total of 5.8 trillion won in annual dividends. In addition, the Company cancelled half of its treasury shares in 2017.

As announced earlier, the Company will focus on delivering shareholder value by increasing dividends for 2018 to 2020. The planned 50 to 1 stock split is expected to improve the accessibility and liquidity of the shares.

“We also established the Governance Committee, comprised entirely of independent directors, to address all matters that can have a material impact on shareholder value,” said Chairman Kwon.

Upon shareholders’ approval, President and former Chief Financial Officer Sang-Hoon Lee will be elected to the Board and take the role of Board Chairman, succeeding Chairman Kwon. This will mark the first time Samsung Electronics will separate the Chairman of the Board and the Chief Executive Officer roles.

“The separation will further empower the Board of Directors and enhance its independence,” said Chairman Kwon. “The Board will be able to evaluate the Company’s performance more objectively and have greater authority and efficiency as a decision making body.”

Following their elections, the number of the Company’s Board members will increase to eleven from nine.

“I believe this is the right time for a younger leadership to take the helm of the Company to better respond to a rapidly changing global IT industry,” said Chairman Kwon. “I sincerely hope that our shareholders will continue to show unwavering interest and support our new management team.”