Samsung Electronics launched Drive Link, an innovative in-car smartphone application designed for safe use while driving. Drive Link is built around the three most popular uses of smartphones while driving: listening to music, navigating to a destination and talking hands-free. It also includes shortcuts to other useful driving applications that have also met exacting safety certification standards. 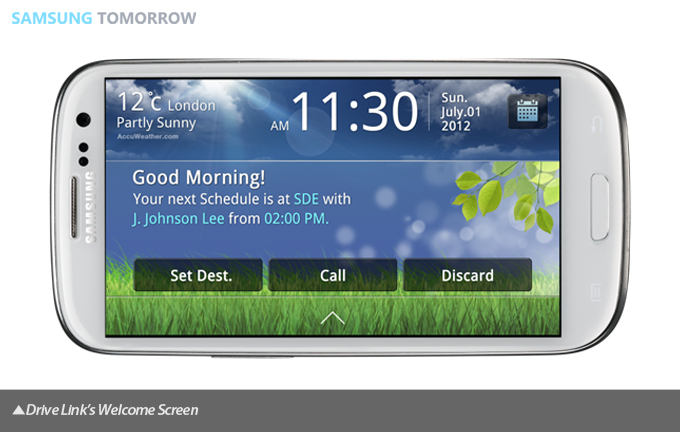 The Drive Link application conforms with the standards of the Japanese Automotive Manufacturers Association, one of the world’s strictest driver’s safety regulation standards.

Drive Link’s interface is clear and uncluttered, perfect for quick and intuitive use when on the move. Enlarged buttons are complemented by a simple menu structure that makes navigating through the options easy and intuitive. Upon loading the App, the user is presented with a welcome screen displaying time and weather information for the current location. Upcoming appointments saved in S Calendar are also displayed and, if they contain address information, a link is displayed and set directly as the destination.

Drive Link has complete navigation functionality using the smartphone’s GPS features, allowing the user to select preset, recent or favorite destinations, or search for a specific address. If a text message with address information is received while using the App, users can set the address as their destination with just a single click on the text.

If present, Drive Link can connect smartphones to a car’s In-Vehicle Infotainment system, or head unit, via MirrorLink™. MirrorLink™ is the new standard connectivity protocol between smartphone and car head units from the Car Connectivity Consortium, an industry body comprising most major smartphone and vehicle car manufacturers including GM, Toyota, Honda, Volkswagen, Daimler, and Hyundai. Current working head units include JVC’s KW-NSX11), Alpine’s ICS-X8, and Sony’s XAV-701BT, XAV-741 and XAV-601BT.2). Additional compatible head units will be announced in the near future.

In terms of entertainment, every music file stored in the smartphone is accessible to be played through the car’s speaker system. Users can also go well beyond their music libraries with TuneIn (requiring version 6.2 or later), a global Internet Radio app which offers 70,000 stations and two million on-demand programs streaming from every continent. Further compatible internet apps will be made available soon.

Staying in touch during journeys can often be important. With this in mind, Drive Link incorporates a feature called Text-To-Speech, available in English(U.S./U.K) French, Italian, German, and Spanish, which enables all incoming messages, emails and updates from social media websites to be automatically read via the car’s speaker system so that drivers’ eyes are always on the road, ensuring maximum concentration and safety are maintained. All personal contacts saved in the phone are loaded to Drive Link and users can also make a phone call directly by dialing on the keypad. 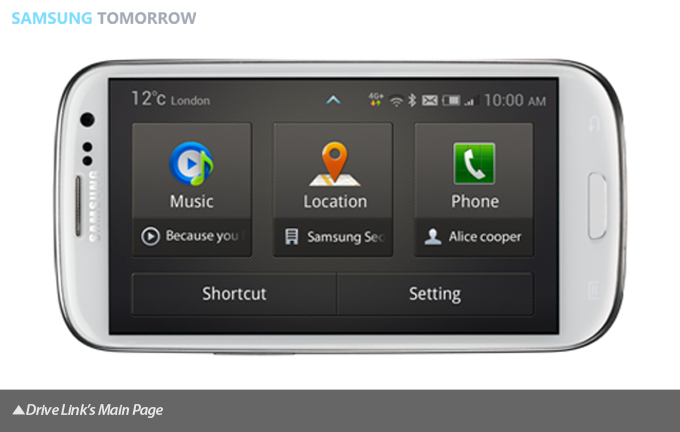 1) JVC’s Head Unit is not available in Russia and Ukraine.