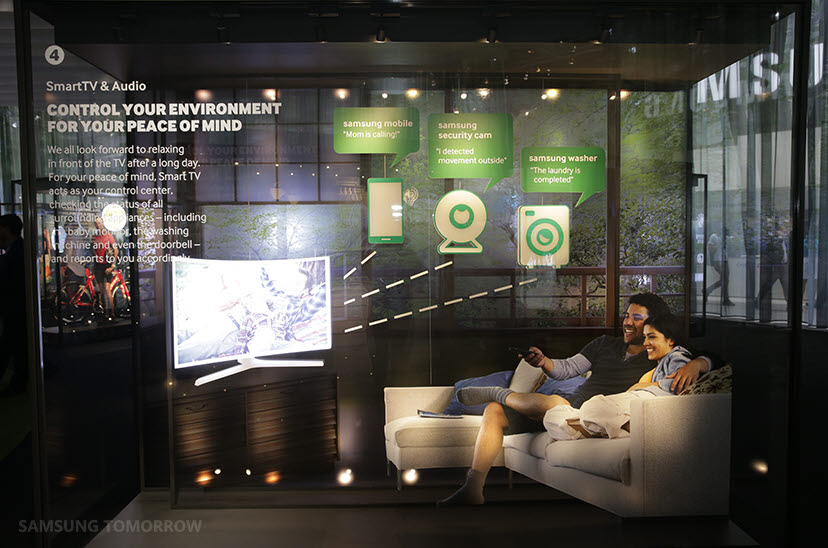 Samsung Electronics, the world’s No.1 TV manufacturer, talked the future of television at IFA 2015 in Berlin. From content partnerships to an ever-expanding TV line-up, there was a great deal of exciting news, but one aspect was a common theme: the Internet of Things (IoT) TV.

Up until now, the TV has been a device for viewing television shows and movies; as such, picture quality and viewing experience have always been two of the most important features of the device. Unsurprisingly, these core values are not likely to change in the future, especially at the dawn of the 4K UHD and even 8K resolution era.

Samsung also disclosed its strategy to expand the value of TV with IoT while maintaining its leadership position in core areas such as picture quality. Furthermore, Samsung illustrated the concept of IoT TV in a storytelling format via an eye-catching display of six glass showcases. These displays illustrated what a day with IoT TV might be like, from the early hours of morning to bedtime.

So what can one expect from the future TV? First, upon waking, the morning news, weather forecast and traffic information fill its screen, all the while displaying the user’s schedule for the day. With IoT TV, the user can use voice controls to open the window blinds or power on the air purifier and air conditioner, which had already been gauging the air conditions inside the house.

After the user returns home from work, the TV and audio system automatically start, playing his or her favorite song. Even the lighting and temperature settings automatically adjust to optimal conditions.

Samsung also suggested that television can be a family communication tool. As demonstrated in the IoT showcase, all Mom has to say is, “Dinner’s ready,” and the TV and audio installed throughout the house will signal everyone in the family to head to the kitchen.

Additionally, the TV acts as the family’s control center, checking the status of all surrounding appliances, such as the baby monitors, washing machine and even the doorbell. The system can also manage notifications by reporting them in a prioritized order based on the user’s life patterns.

Another part of the IoT showcase presented a home where the TV identifies programs being watched and provides a viewing environment customized for each type of content. When playing movies, for examples, the TV dims the lights and shifts the audio to movie mode to deliver a richer, grander sound, creating a cinema-like experience in the comfort of the user’s living room.

Finally, recognizing the “Good Night” command, the audio system will turn off the lights, lower the blinds and switch the air conditioner to a comfortable temperature for sleeping.

This is one way Samsung envisions how the future of TV will positively impact our lives. But if a company only looks to the future, it cannot be a genuine leader of industry. Therefore, a company must constantly strengthen its core customer value of presence. 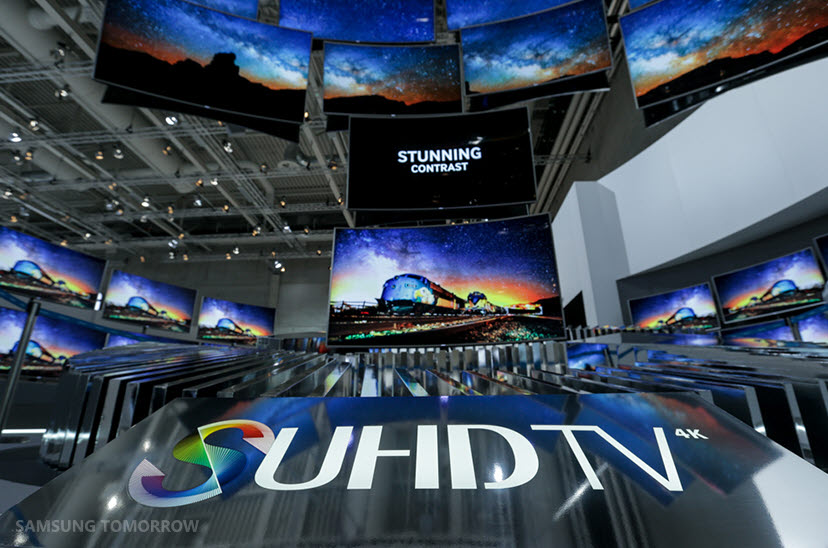 As such, Samsung remains forever committed to enhancing the viewing experience and has recently teamed up with Netflix, Amazon, Wuaki, Chili, Strefa VoD, Videoland, Videoload, TVN, Viaplay and European broadcast partners to enrich the UHD ecosystem.

“Through IoT operated by TV and audio, people will be able to experience a more convenient, productive and enjoyable smart home,” said Min Lee, Vice President of the Visual Display Division at Samsung Electronics. “But Samsung will never compromise with constraining ultimate picture quality and viewing experience.”