Samsung kicks off its massive Olympic Games Campaign, encouraging people around the world to come together and connect with an emotive and inspiring campaign that has something to excite everyone. 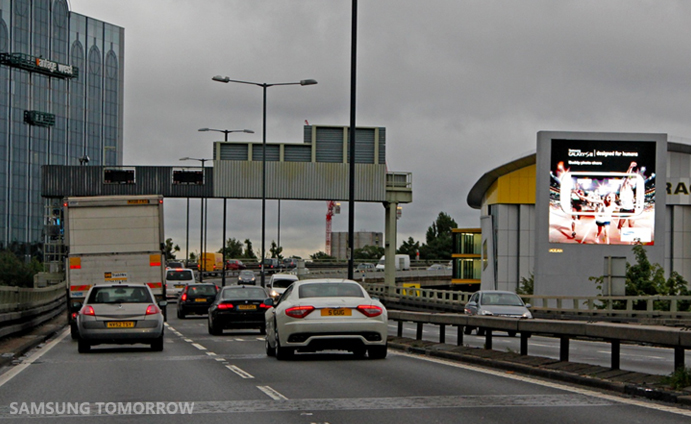 The recently released GALAXY S III is at the core of this campaign. Designed for humans and inspired by nature, the GALAXY S III uses advanced technology and intuitive characteristics to inspire, excite and connect, allowing everyone to watch, participate and enjoy the Olympic Games like never before.

Consumers can now witness and be inspired by the new Olympic Games version of GALAXY S III TV commercial, get hands-on with innovative Olympic Games mobile apps that put them at the heart of the action, and enjoy mobile pop-up PIN experiences across the UK which bring communities and technology together. 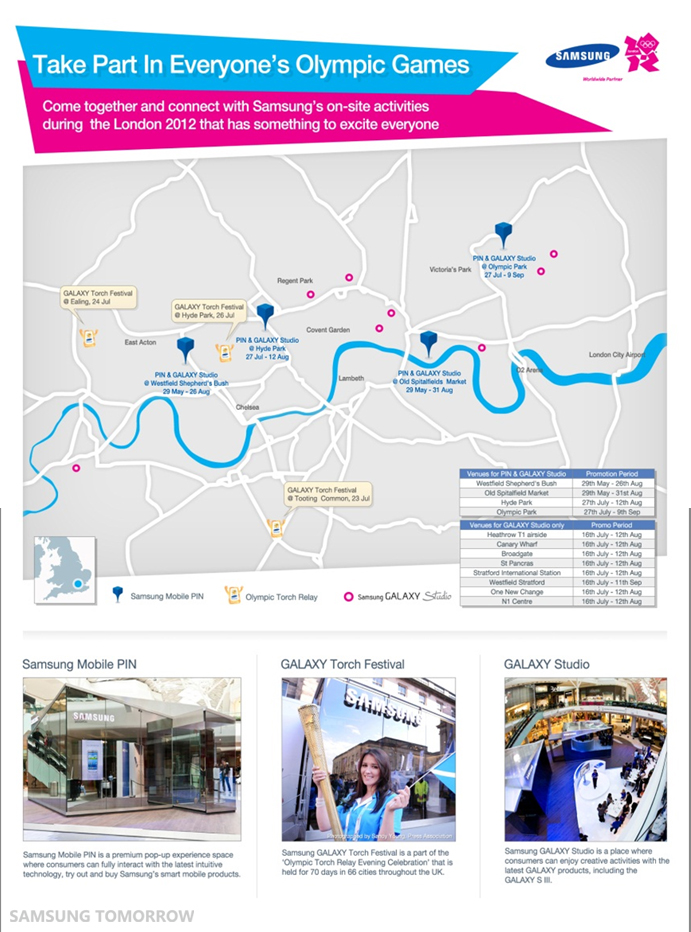 Samsung is supporting its Olympic Games campaign with a TV commercial created to amplify the GALAXY S III’s role in the Olympic Games. Few can build anticipation, buzz and excitement quite like David Beckham, and therefore casting him to launch the commercial was the perfect choice.

The TV commercial will be aired starting July 16th in more than 20 countries including UK, France and China.

Mobile Applications for the Olympic Games

Samsung introduces “Samsung: Take Part 2012”, a new Android Application designed to bring consumers closer to the London 2012 Olympic Games. The app allows users to play 3D and Augmented Reality (AR) sport games, and challenge their Facebook friends in each of the events. Users will be able to compete for the top position in the global leader board, and help earn medals for their country which will be displayed in the app and on Samsung Mobile’s Facebook page. Also, the app provides a variety of Olympic Games content, allowing users to take virtual 360° interactive 3D tours of the Olympic Stadium and other official venues, test their knowledge with polls and trivia, and keep up with the latest news about the Olympic Games.

In addition, those who are planning to visit London this summer can receive top recommendations for essential places to see using Visit Britain’s “Best of Britain” App, including David Beckham’s Top 10 personal highlights.

Both “Samsung: Take Part 2012” and “Best of Britain” applications are available for download at Google Play Store and Samsung Apps.

The Samsung Mobile PIN is a premium innovative new space, specifically designed to provide consumers with a hands-on brand experience. The PIN allows customers to fully interact with the latest intuitive technology and try out Samsung solutions, including the Samsung GALAXY S III and Samsung GALAXY Note. The conceptual idea of the PIN is a moving landmark experience like a pinpoint on a map. Visitors to the Mobile PINs will meet fully trained staff members who are on hand to share their product knowledge and provide demonstrations, allowing customers to try out Samsung’s smart mobile devices, functions, services, and apps. 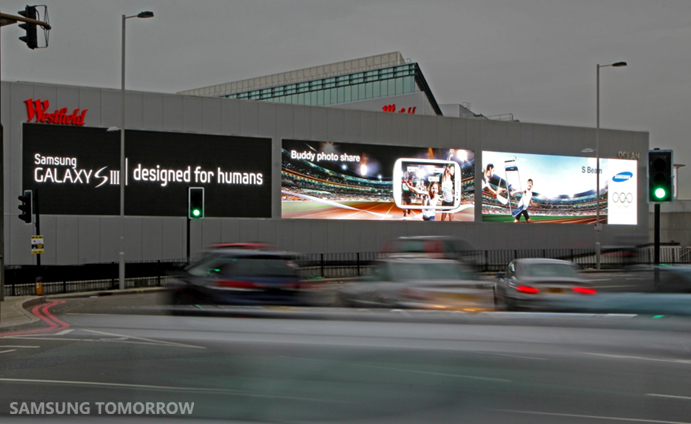 The GALAXY Studio, a global experience-based platform that allows consumers to enjoy creative activities with the latest GALAXY products, is integrated with the PINs to further expand hands-on brand experience. Available to visit at each of the PIN sites and in many more across downtown London, the GALAXY Studio offers various product presentations, experiential events, and fun performances to engage customers with the latest GALAXY products. Customers can win prizes including Samsung GALAXY S III devices and a trip around the world by collecting Samsung Olympic Games ‘pins’ at the PINs and GALAXY Studios.

More information on the promotional activities and prizes can be found by downloading the “Samsung Mobile PIN” app at Google Play Store and Samsung Apps.